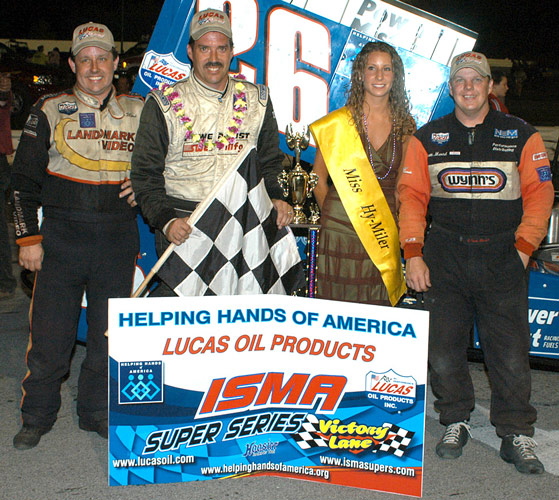 Sandusky, OH – When Pennellville, NY’s Pat Abold came on the supermodified scene it was in the early 90s and he accelerated to the top very quickly. In 1992 he won just about anywhere, any place and any thing there was to win in racing, including the prestigious Hy-Miler Nationals in 1992. After laying his career aside for a number of years to help his son’s quarter midget career, Pat came back to racing full-time. Fast-forward to 2005 and Hy-Miler Nationals win number two. In what he calls the “latter stages of his career” Pat Abold is having one magnificent year.

After a high-flying Chris Perley left the Hy-Miler field on lap 54 with a broken panhard bar in the rear, Abold moved in on new leader Scott Martel and made a high side move out of two to take over the lead. Even his teammate Russ Wood – a 4-time Hy-Miler winner – could not seriously challenge the Dunigan-owned 26 even after a couple late race yellows.

Standing in Hy-Miler victory lane13 years after his first visit, Abold said, “It’s been a long time. It was 1992 when I won the last one. I was close a few years back in Clyde Booth’s car but it didn’t work out for us that night. This feels really good. This is the latter part of my career and we’re having a great year. Racing with these guys is some of the most fun I’ve ever had besides racing with my father and my own car. It’s just been a ball. The crew takes the burden off. I just show up at the racetrack and I never have to worry about anything safety-wise and then I know the cars are fast every time we go out. It’s a lot of fun. We have a great bunch of sponsors and I thank them all also.”

Pat continued about the win, his season and his career. “I’m working with my son Jeffrey developing his talent. He’s running the Ford Focus midget series. He’s already won a race this year. He’s just turned 16 and he’s an incredible talent. The timing is just perfect. I am going to shift all my efforts to his career over the next couple years and just have a ball with that. This is as good as it gets for me. I’m not going anywhere else in racing. I don’t want to go anywhere else. This is just pure fun. This is it!”

Abold didn’t rabbit to the front of the long-100 lapper and settled into fourth watching Perley decimate the field for over 50 laps. After putting Scott Martel into second on lap 70, Abold pulled away. He described his race, “We start with a forty gallon fuel load in this 100-lap race and if you go too early you can really burn the tires up so you need to wait. The car was a little bit loose. Even in the long run in the middle of the race it started getting loose. Lap traffic was a little bit difficult. Some weren’t paying attention to the passing flag but they were consistent and keeping a line. They weren’t all over the place so I just had to change my line. I was better passing on the outside and I needed to try and run there. When we could get in clean air and run by ourselves, we were definitely faster. “

Russ Wood, who tried to catch his teammate over the last 30 laps of the race said later, “We finished second to what we know is a great racecar. Pat’s a great driver. The team did a great job to have two cars in the top two. The only problem was that we both had the same setup. So, it was tough to pass him. He was really tight in the end and I was tight. Once I reeled him in, we were equal and tight. It was a decent race. I’ll take second.”

Scotty Martel, who led before and after Perley and before Abold, was just happy for the podium finish. “I am happy to finally be up here on the front stretch after a race, especially a race like the Sandusky Classic. I want to thank Howie and the crew and all the guys who work on the car who make it possible. And, thanks to all our sponsors who help us out. Congratulations to Pat and Russ. You know you’re racing against the best when you’re racing against the Dunigan team. I’m real happy for them and I feel really good about finishing up front.”

After a day of time trials and qualifiers, the huge crowd on hand watched as the field of 26 winged supermodifieds came off four for the green flag. Conspicuously absent was the defending champion Mike Ordway whose bad luck continued in his heat when a strut broke on his wing and punctured the metal. Repairs could not be made. There would be no repeat win this year.

Scott Martel outgunned polesitter Dave McKnight for the lead, but moving ever so quickly up to second was Chris Perley who had said earlier that the team finally had “this place figured out.” Dicing through traffic, Perley chased Martel until he powered by his good friend on the front straight.

The first yellow fell on lap 44 when Moe Lilje stopped and had some flames erupt from his car.

Back underway, Perley had four laps cars in between his Vic Miller-owned 11 and Martel and he just kept putting more in the space. And, just as suddenly as he was moving around the track, he left it, sliding onto pit road on lap 54. He reported later that a heim end had stretched, breaking the rear panhard bar. He felt bad and good at the same time “I felt good about the car,” he said. “I feel we had finally gotten the setup to win. The part broke clean. It was a new part, a part that usually breaks when you brush something The 11 has never run that good at Sandusky and now at least I know I can come back next year and have a go at it.”

Martel was back in the lead after Perley’s demise and within two laps, Abold had started his move. A spin by Nokie Fornoro on lap 59 set Pat and Dave McKnight right on Scott’s tail but Martel was persistent and held off the 26 for eight more laps before relinquishing the lead.

With 25 to go, the racing was still fast and furious as lap cars presented challenges to the top running cars of Abold, Wood, Martel, McKnight, Lichty, Belfiore and now Joe Gosek in the May 7. As Abold knocked off a few more lap cars, the crowd watched the racing behind, between that aforementioned pack.

Wood was able to break free and get closer to Abold with less than ten to go when the yellow flew for Vern Romanoski to give him an even better opportunity.

Back in the top ten pack, Martel held third while teammates Dave McKnight and Mike Lichty battled for fourth. Said McKnight later, “ It was fun racing with Mike. He’s learning. We ran about eight or nine laps wheel to wheel. He told me after the race ‘boy you just never go away’ and I said that’s what it’s about Mike. It was a strong run tonight for the Lucas Oil-Patco team cars. We’ll take a fourth and fifth and move on to Mansfield to see if we can’t improve on the spots.”

Still in the hunt behind the Patco cars were Belfiore, Gosek, Sammut and Fornoro, but not for long. Belfiore’s 8 came off four on lap 95 with a tire flying off the car. Red was called and while stopped, the 77 of Charlie Schultz had smoke coming from that car. Schultz jumped out with a hot foot and his teammate Joe Gosek’s 7 had to go pitside with a fuel leak. Amazingly Belfiore was able to return, as was Gosek after repairs.

Back underway, Abold was just five laps from victory and nothing stopped him now. Wood settled into second with Martel, McKnight and Lichty the top five. McKnight’s young teammate commented on his fifth place, “It was like last night – tight. We were pretty decent running behind Scotty there but on the restart I got into him a bit and bent the front nose wing up. After that the car just shoved so bad that Dave got by Justin and me there before Justin ended up in the fence. It was a good weekend. A third last night and a fifth tonight. It’s good for the points. I’d just like to thank Lucas Oil and Patco and everybody that helps us.”

ISMA will travel back to Ohio for the two-day Mansfield Speedway show on Friday and Saturday, August 12 and 13.