SANDUSKY, Ohio — Canajoharie, New York’s Otto Sitterly showed the fast way around the Sandusky Speedway Friday night, leading all but one of the traditional 40-lap prelude to Saturday’s Hy-Miler 100.

Sitterly took the black #7 to the front by the second lap and took off like a rocket, not to be challenged for the front spot despite a couple yellows along the way that grouped the field on two occasions.

Otto commented later in victory lane: “Once this car gets wound up it’s pretty good. We were a little tight in the feature. I ran with Trent a little bit there but basically I had to stay out front because the car was getting tighter. But I’m very happy with the power plant. Jimmy D’s Speed and Machine in Syracuse has done really good for us so far in the last few years we have been with him. I have thank Jim Bodnar, he’s the guy helping behind the scenes. He’s always helping with all of his cars, so I owe him a lot Artie Lentini of Art’s Radiator helped us out, over night service, building us a power steering cam for the power steering there. Quick service. I called him on a Monday and he had it shipped by Tuesday. It’s great to see a full grandstand, Maybe tomorrow we’ll have some more competition. Hopefully we can go the distance tomorrow in the 100 lapper. A starting position helps and this is the best we’ve started all season. Hopefully we can have a decent starting spot and more importantly we are battling these guys at the end. I’d like to thank my crew. It’s a good bunch. This is pretty new to us. We’ve been together for a long time. We’ve taken our licks from time to time but we have a fast car and we’ve known that. We’ve shot ourselves in the foot a couple of times, but it’s not as easy as it looks.” 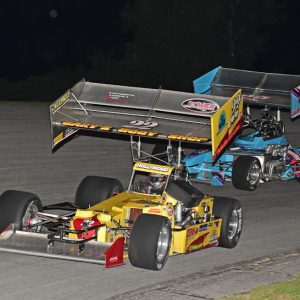 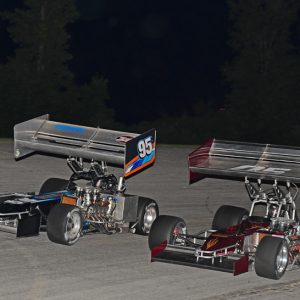 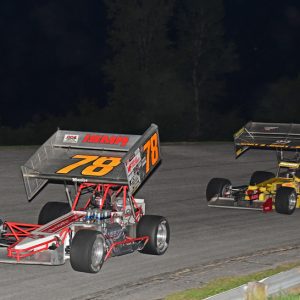 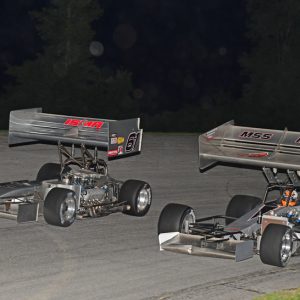 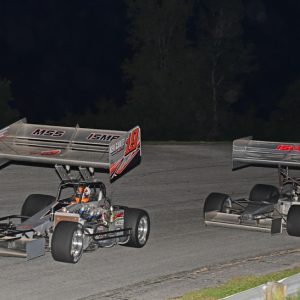 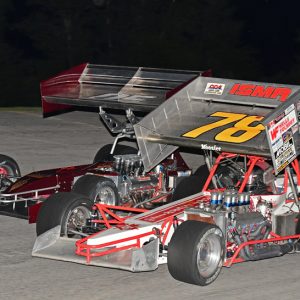 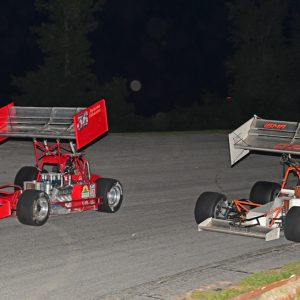 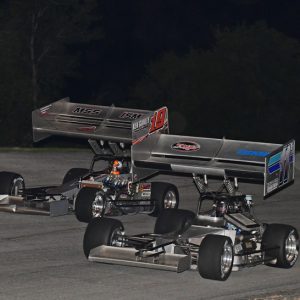 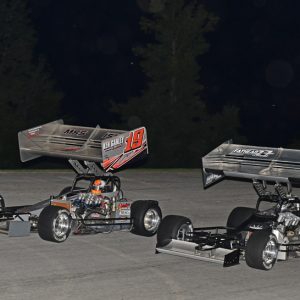 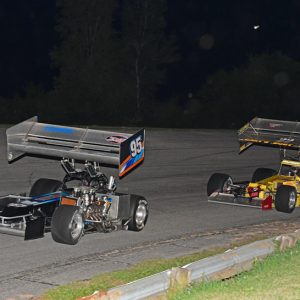 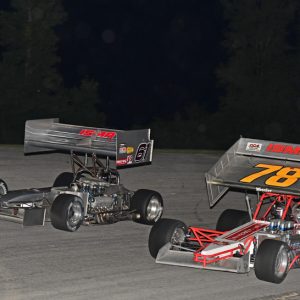 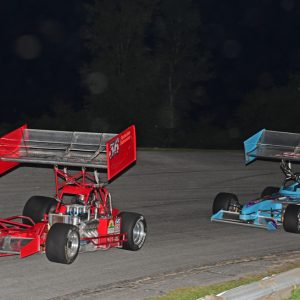 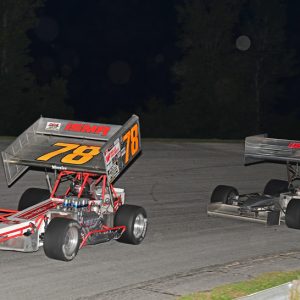 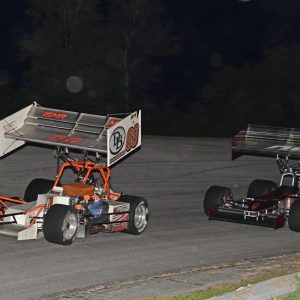 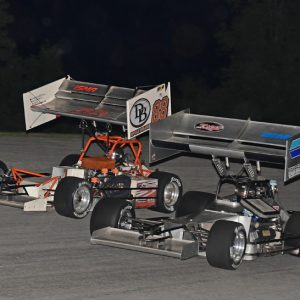 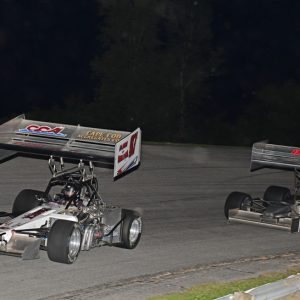 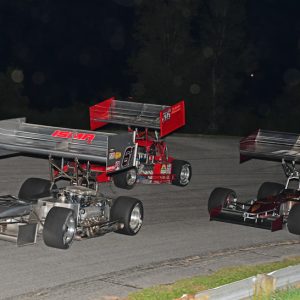 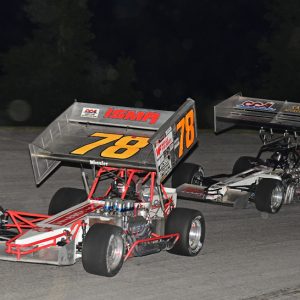 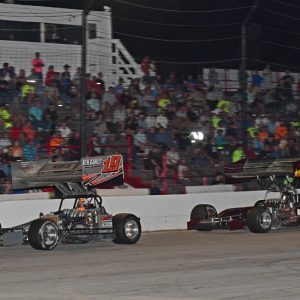 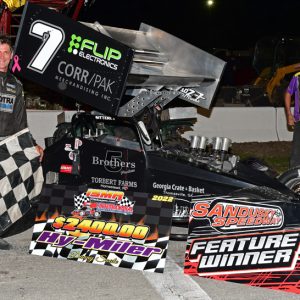 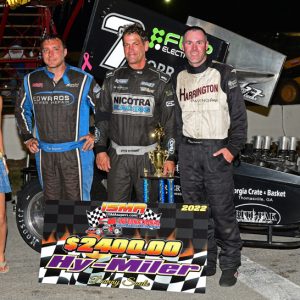 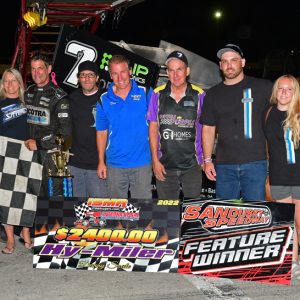 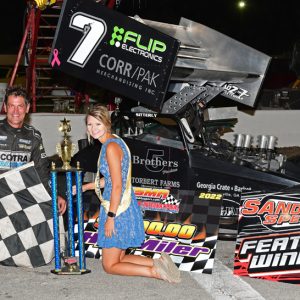 AJ Lesiecki led the first lap in the 88 before Otto claimed the spot. Coming up behind Lesiecki was the 19 of Trent Stephens, who took over second to give chase to the flying Sitterly. Lesiecki held onto to third but fast qualifier Kyle Edwards was on the move as was Mark Sammut, Ben Seitz and Mike Ordway Jr, all ready to challenge Sitterly as the pace quickened as the laps clicked off.

Stephens picked off Edwards just after a lap 17 yellow flew for the 32 of Moe Lilje who moved to the pits. Both the 88 of Lesiecki and the 36 of JJ Henes pitted and returned with the Lilje 32 calling it a night at this juncture.

On the restart, Stephens gave it his all as he got alongside the 7 of Sitterly for a brief time before the 7 one again sped away from the field. Edwards moved up to take second from Stephens a short time later while the 61 of Mike Ordway Jr. applied pressure on Stephens from behind, near the halfway mark.

On lap 23 it was Sitterly, Edwards and Ordway with Stephens, Seitz, Jeff Abold and Dave Shullick Jr. all trying to keep the 7 in their sight.

Lap 30 saw the last slowdown when the 8 of Kyle Capodice slowed and pulled pit side.

Sitterly faced a ten lap sprint to the finish while Edwards, Ordway Jr., Stephens, Seitz , Abold, Shullick, Sammut, McVetta and Henes were the final challengers behind.

Abold was the mover as he picked off Seitz and then headed for Stephens, who he passed with 5 laps to go.

At the line it was Sitterly way out front with Edwards, Ordway, Abold, Stephens, Seitz, Shullick and Sammut and the 36 of Henes left on the track..as the 22 of McVetta had pulled in at the lap 36 mark.

Second place finisher Edwards, who was the fast time trialer earlier said “I’d like to thank a couple partners Sweet Manufacturing, RFK Rod Ends, Performance Fabrications, and my dad. “He’s the moving force behind the car.”

And Ordway, who has had some memorable success of late, described his night”: It wasn’t a bad night.” We started ninth and worked our way up to third. That’s not bad in a 40 lapper. I’m not as good in shorter races. I usually like to kind of ride around and take my time. I remember three years ago it started here. We won Friday night’s deal and won on Saturday. I hopefully we will be able to do that again tomorrow. I just want to thank everybody – Clyde Booth, Booth Racing Performance, JRI Shocks, Performance Engines by Billy the Kid and everybody who helps out on this deal. Sweet Manufacturing – everybody who pitches in. My wife, my parents, Doc and everyone who helps. We’ll debrief tonight and hopefully come back tomorrow and see if we can pull it off again.”

2 RANDOM DRAW for heats $100 each. Sponsor Oswego fans — see you at the Classic.

Heats were won by Mark Sammut and Otto Sitterly. Sponsor Oswego fans — see you at the Classic.