MIKE ORDWAY JR. FOLLOWS HIS FATHER’S 2004 WIN WITH VICTORY AT THE 40TH RUNNING OF THE ISMA HY-MILER 100 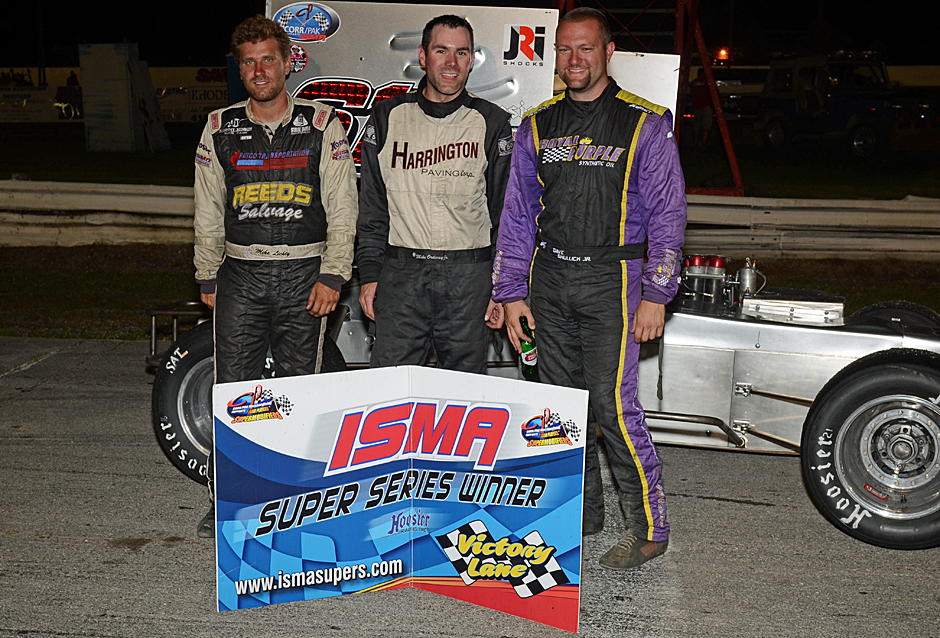 Last season Mike Jr. had gotten the call to drive the potent Booth-built ride, something he had always dreamed of doing from a young age. He jumped at the chance. Mike picked up a win in his initial year for Clyde and Susan Booth in 2016. Saturday he topped that with the winning of the prestigious Hy-Miler Nationals, becoming only the second father and son combination to etch their names into the record books along with Dave Shullick Sr. and Dave Shullick Jr. Mike Sr, and the rest of the close-knit racing Ordway family were all on hand to enjoy the victory lane ceremonies of the second generation winner.

The quiet spoken Ordway Jr. was the fastest time trialer in qualifying, taking off from his pole position spot in the feature, never to look back or be seriously challenged. Mike spoke of his race weekend with pride:

“I knew we were going to go back in the direction that Clyde normally goes here. We were a little bit off yesterday. We struggled the first two practices today and didn’t really hit on it until the time trial and heat race. We just did what we could in the feature taking advantage of the starting position. Nobody showed me a wheel in the first fifty and I knew I had saved enough any time after half way that if someone showed me a wheel, I could just get up and go. I have to thank Clyde and Susan. They’ve had a bunch of winners for the Hy-Miler and to be one of them is pretty neat. You know to win it when Dad’s won it, is pretty cool. Wire to wire was pretty good too! I tell them I don’t like starting up front because you don’t know where anyone else is. But tonight we just did what we could and it worked out. This is just awesome.”

Starting fifth in the field was Mike Lichty, who worked his way up to second, but could not quite reach Ordway by the time he got there. Mike has had more than one second place in the Hy-Miler and had looked to pick up one more coveted spot.

“Well, second again at this race…. that’s fun. From where we have been all year, other than Oswego, we’re definitely getting better. We had him a couple times, we were just too tight in the center to do anything. I thought lap traffic would have helped. Once he got to lap traffic I thought I’d have an opportunity to pass him, but I struggled going by lap traffic more than he did. I just have to thank everybody Reed’s Salvage, PATCO Transportation, everybody on the crew.”

Lichty also voiced concerns about the quality of the winged supermodified racing as compared to past years, much the same as a fellow driver had after Friday night’s Fast Forty event.

“Originally in the off season all the ISMA board of directors were supposed to vote on a tire. And that never went through. They just came out with this tire and the first couple races, the cars and the people who wanted the tire, won. Now that everybody’s on the tire, the same cars are on the podium and their cars are back where they belong – top five or a little less. My opinion is there is no passing. And, we need to come up with a tire to bring back more passing and to show the potential of these race cars to the fans. That’s one reason why we run them. They are so cool a race car. Not too long ago, a guy could start in the back and come up to potentially win a race. And, now there is just a lack of passing. I think the fans and promoters deserve it and for a way to grow the series, I think that needs to happen.”

Third place finisher and defending race champion, Dave Shullick Jr., had had a similar opinion after the previous night’s race, but felt his third place Hy-Miler finish was in line with his car’s capability.

“It was a good run. We left everything we had out there. We know. We fought it all week. We battled. We didn’t have the best car yesterday and probably not the best out there tonight either. We took what we had and had a shot at the end. Lap cars were pretty respectful at the end. I was pretty loose off four. We were running our own race at the end really. That’s all you could ask for. We’re happy with it. We weren’t as good at the two guys in front of us. I had one shot at it there once but got really tight and couldn’t really stay there. It’s in one piece and live to race another day.”

Thirty winged supermodifieds were in the pits on Saturday with one new arrival in Johnny Benson Jr. who was fitted into a Lichty machine. Lost before action started was Justin Belfiore, leaving 29 cars to take time trials and enter the heat races. No less than 17 of the trialers were under the 15-second mark on what was a perfect race day weather-wise. Ordway Jr., as stated took the honors with a 14.519. Heat wins went to Mike McVetta, Dan Bowes and Ben Seitz with the field now set for the 100-lapper.

Lined up in the front row were Ordway and Mark Sammut with Ordway taking the point on the initial green, one he never would relinquish. Before one lap was complete Jim Paller’s 64 was stopped in turn two with Ben Seitz and Dave Danzer seizing the opportunity to pit and return.

Ordway pulled away from Mike McVetta, Trent Stephens, Mike Lichty, Mark Sammut, Dave Shullick Jr and Michael Barnes on the restart but things slowed again on lap 6 when Johnny Benson’s Lichty 4 slid off the track in turn 3. He went pitside returning later in the race. Guard Nearbin, off the pace, pitted here ending his night.

Back underway, Ordway headed up McVetta, Lichty, Trent Stephens, Shullick and a host of hotshoes behind. Denny Fisher was added to the growing list of those heading to the pits when he left the action on lap 8.

Yellow flew on lap 13 when the 1 of Kyle Edwards stopped in turn four and was pushed to the pits.

By lap 20, Ordway had some distance between his 61 while McVetta and Lichty were battling for second. Trent Stephens, Shullick and Mark Sammut were the next trio fighting for position with Timmy Jedrzejek holding off Jon McKennedy, Otto Sitterly, Michael Barnes and Sammut.

A couple lap cars were already in the mix when the two leaders approached. McVetta was catching the 61 as the two moved high and low around the slower cars but a lap 26 yellow slowed the progress once more when Friday night winner Moe Lilje stopped the 74, was pushed pitside and he too was out for the night.

Ordway held command as the lap 30 mark was nearing with Alison Cumens and Joey Payne, both having problems, added to the attrition.

On lap 31, Otto Sitterly’s 96 had a front axle break, sending Otto off the third turn. With a minimal amount of caution laps available for running the Hy-Miler, and facing a lengthy extrication of the 96, refueling was allowed during the stop.

Heading back into action, it was Ordway, McVetta, Lichty, Trent Stephens, Sammut, Shullick, McKennedy, Jedrzejek, Barnes and Bowes, the top ten. Shullick moved past Sammut just after the restart.

The order pretty much stayed the same in the march to lap 40 with Shullick the man on the move. He was fourth passing Trent Stephens for the spot on lap 35. On lap 40 Stephens, who had a top five on Friday, was out of the race.

Ordway showed the way once more on the green with the top ten still pretty much in tact until Johnny Benson, who had re-entered the race, was stopped in turn 4. He was pushed in. Rich Reid also exited the race here with Tim Snyder in and out of the pits for the second time.

At the halfway mark, Ordway left little doubt he had the car to win as McVetta and Lichty still fought for second with Shullick, Sammut, Barnes, McKennedy and Jedrzejek biding their time in the long feature.

Unfortunately, McVetta’s night ended on lap 58 when the 22 had rear end gears go, leaving some fluids on the track. He and Ordway had been in contention last year when both met with misfortune. This time only McVetta felt the bad luck as he was hooked off the track.

This delay was the last as what mounted to a forty lap sprint faced those remaining. Ordway now had Lichty, looking for his first Hy-Miler win, right behind. Shullick, Sammut and Barnes had closed up the gap with McKennedy, Jedrzejek, Jeff Abold and Dan Bowes a couple car lengths off the bow.

At the lap 80 mark, the top five began to string out, leaving McKennedy, Jedrzejek, Abold and Bowes in line aways behind.

Things got a little frenetic when the dash for the victory mounted on lap 90.

Ordway had just passed a lap car which slowed Lichty and Shullick as they got by. Barnes was knocking on Sammut’s door helped along by the getting by of that same lap car.

With 5 to go, Ordway came up on Dave McKnight, who had been penalized for jumping a restart, and was able to get by but Lichty, Shullick, Sammut and Barnes found it a little more difficult to get around the veteran who was racing in his 25th Hy-Miler and a former winner.

Ordway was not to be challenged for the popular win in those last three laps while Lichty had clear sailing in second, leaving the 70, one lap down, between Shullick, Sammut and Barnes. Barnes grabbed fourth with two to go, leaving Sammut in fifth and giving the sub driver of the Miller 11 a third and fourth place finish for the weekend.

“I just want to thank Vic Miller for giving an opportunity to drive for him. It was just an awesome weekend. I want to thank Leo and Scotty for all their hard work, Big Dan, and my father for coming and helping out. And Vic’s sponsors, Shea Concrete, Jimmy D’s Motors, Granite State Salvage and Perley’s Marina. It was great to fill in for Chris Perley this weekend. He’s a guy I love racing with and always cheered for. We had a pretty good car all weekend. We didn’t really have to change much. I think it was more the driver. The car was better than the driver. I just haven’t raced with a wing in five years. I think we were as good as anybody else at the end of the race for sure. But, I don’t race with these guys enough. I took it too easy at the beginning. Then it was probably too late. I had too many guys that I should have gotten behind me. I had some growing pains trying to get used to the car, to get a feel for it. I really can’t be happier for Vic Miller and the team.”

Mark Sammut, who started second, was okay with a fifth place finish. “We were tight at the start. We were a little short at the end but the car ran pretty good considering how bad we’ve struggled this year. We weren’t quite quick enough to keep up at the start. After about fifteen, twenty laps, we got rolling. The car ran good through the middle of the race, but in the last ten laps we were just hanging out as we’d worn out the tires. That cost us a spot at the end. Not much you can do. It was a decent run.”