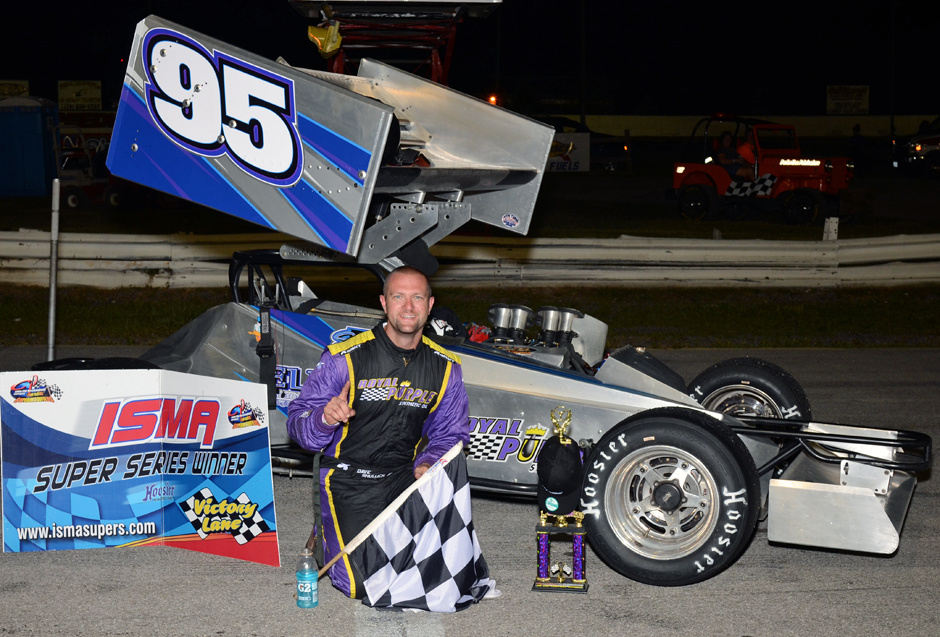 Sandusky, OH – Dave Shullick Jr. had set fast time earlier in the afternoon at Sandusky’s Fast Forty, the first leg of the 39th running of the Hy-Miler 100. Not an unusual scenario for the guy sitting second in the ISMA point standings. But, he wasn’t done yet. Shullick Jr., starting sixth in the field of 24, caught up with race leader Danny on lap seven, flew by him in turn one and proceeded to continue to fly, lapping all but ten of the cars on his way to victory. The Jim Bodnar 95 was pretty much unstoppable! Not even a lap 14 yellow for Mike McVetta, who had started fifth, who blew a tire and landed off turn one, could slow the Shullick decimation. It was Shullick’s second Fast Forty win in the race’s history. He was already thinking about going for a second Hy-Miler on Saturday as he commented after the race.

“The race car was good all day and we were able to keep it going in the race. Tomorrow is the one we want so this is all part of it. I was just running the best I could. A forty lapper is not a time to hold back. I just gave it what we could safely and try to roll the bottom. That’s about it. We ran “Fire” tonight, we’ve been running “Ice” the last few weeks and we just wanted to bring out Fire as we felt it was going to be a good car and it really proved it was. I’m looking forward to tomorrow. It’s my favorite race of the year. I’m hoping we can have a good car and be there at the end.”

Finishing in second, but a long distance away, was Moe Lilje driving the Jimmy Bodnar 76. He was pleased to finish second, but he had no misconceptions that he might have caught the 95 before the 40-lapper ended. “We dropped a spot or two at the start, but I think after DJ cleared us I was about fifth. Once I got off the bottom and was able to get on the high side, I was able to pick off some of the cars. Once we got into second we set sail but even if we had had another yellow I don’t believe we would have anything for DJ.”

Danny Shirey, starting second, was the early leader of the race before falling victim to the Bodnar bunch was quite satisfied with third after a less than stellar year to date. “I’ve got to thank the Stout crew and the whole Acme race team. It finally feels good to get the monkey off our back. We’ve definitely had a tough year so far. It’s just nice to have a podium. I feel bad that me and Mike got into it with a couple laps left to go. It was just a racing deal. I think we’re finally figuring this car out and getting it fast again. I can’t thank Rich and Steve enough. They work their butts off getting this car prepared for me. I’m excited for tomorrow.”

Dave McKnight and Shirey led the field to green, with Shirey grabbing off the lead, which he only held for one lap before yellow flew. Justin Belfiore and Jim Paller were sitting off the third turn with Paller able to return and Belfiore done for the night. Rich Reid and Larry Lenhert headed pitside with the same result.

Back underway Shirey took off and tried to shake Dave McKnight, Timmy Jedrzejek, Shullick and Lilje, but it would be to no avail. Shullick charged by Jedrzejek and McKnight and was the leader by lap eight. And, saying he never looked back might be an understatement as he was lapping at the tail of the field soon thereafter.

Lilje was the man on the move as he worked his way by Timmy Jr, then McKnight just prior to lap 14 when McVetta brought out the yellow and had to be flat bedded to the pits.

It was non-stop Shullick after the restart with Lilje working his way past Shirey on lap 20 to take second leaving Shirey to contend with McKnight, Jedrzejek, Stephens, Ordway, Sammut, Edwards, Lichty and now Ben Seitz, all still racing hard to better their positions.

With ten to go, Shullick had umpteen lap cars between his 95 and Lilje who now was holding a distant second, but also had a commanding second place over Shirey, McKnight, Lichty, Jedrzejek, Stephens, Ordway and Sammut.

Nine laps later, Shullick crossed under the checkers to the cheers of the Shoe II fans in attendance. Lilje and Shirey took podium spots with Lichty and McKnight rounding out the top five.

ISMA point leader going into the Friday race, Mike Lichty, was at work with his crew going over the 84 in the pits after the race. “There is something wrong with the car, we’re not sure what. It was an awful day. We’ll take a top five and move on to tomorrow. Hopefully we can figure out what’s wrong here.”

Polesitter McKnight had hoped for more when the race started but had settled for a top five at the end.

“Fifth is not what we expected. I started on the pole and was hoping to put one in the bank tonight. But, we struggled a little bit during the day in practice and qualifying. We missed the set up big. We took kind of a guess at it. Unfortunately you never like to go backwards. A top five is okay, but the result isn’t really what we were looking for. We’re going to do our homework tonight and come back for the 100 lapper and maybe a better result. They tell me this is my 30th Hy-Miler and that I’ve run it more than any other driver. Hopefully we can pick up a win.”