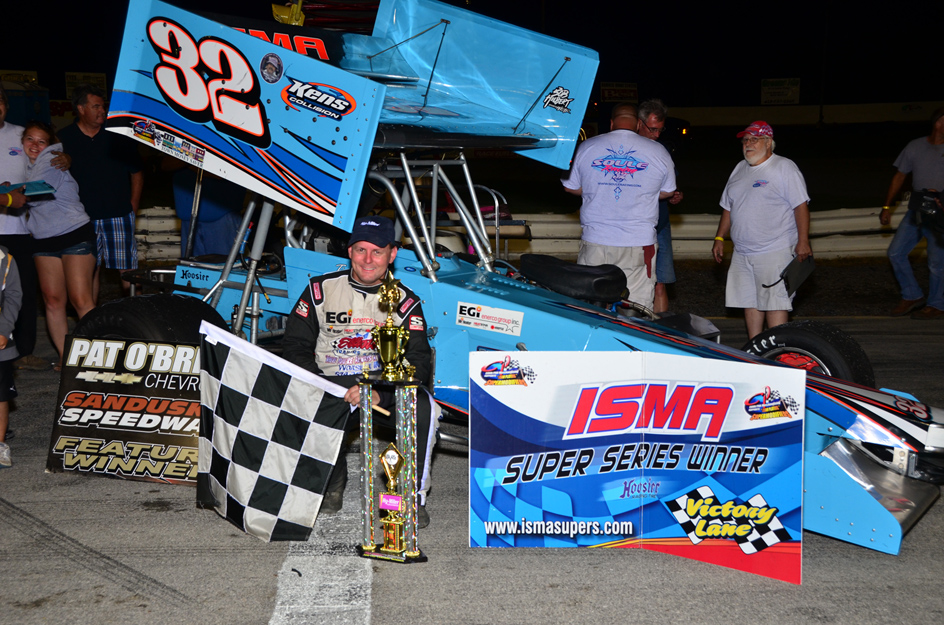 Sandusky, OH – Last year the newly formed team of Clay, NY car owner Dan Soule and Independence, Ohio driver Timmy Jedrzejek added their names to the Hy-Miler list of victors giving them both first-time wins at the prestigious event.  Saturday night at Sandusky Speedway, Jedrzejek and Soule bettered that feat by becoming one of an elite group who have won back-to-back Hy-Miler 100s. Jedrzejek started off from the outside pole in the 35th running of the Hy-Miler and led the entire way to his second straight victory. He was challenged along the way by some of supermodified’s best but was able to fend off all advances. Mike Lichty and the Patco 84 provided the toughest opposition for almost half the race as the Canadian driver was also vying for that elusive first Hy-Miler win, but had to settle for second place.

A huge contingent of Soule Racing well-wishers surrounded Jedrzejek in the winner’s circle as Tim replayed his race. “We never passed a car again this year. It’s hard being the leader of a race.  You don’t know if you’re setting too fast of a pace. You don’t know who the guys are behind you. You don’t know if you’re using too much of your car. All those things were going through my head for the first fifty laps. Then we got past the halfway point and there was no holding back. You know traffic was really tough tonight. Not that they were doing anything wrong. There just wasn’t enough room to go around those cars and I needed the bottom as much as I could because my car would get really loose at the top. In the last ten laps I gave it everything we had.

“I knew there was a car right behind us. I assumed it was Lichty. I saw him once in traffic. We were all slipping and sliding and I can’t believe we held on for 100 laps. We tried to manage the car as best we could with the 84, the 49, the 74 – all these guys are behind you and you don’t know what they are doing. Are they sitting back waiting for the end? You don’t know what’s going to happen. We certainly had a good time tonight.  Thanks to Hy-Miler for sponsoring this event for all these years. To win at this place is something special and to win this race twice is something I’ll always remember.”

Lichty, coming off a second place finish in Friday’s Fast 40, shared his thoughts with  the huge crowd on hand.  “This year has been weird for Hy-Miler because we had a lot of rain, although  we usually have some rain during the weekend. But this year the track didn’t seem to take rubber very well. I think Timmy and everybody else was a tick on the loose side. All in all it was a good weekend for us to come out of here with a second last night and a second tonight. We know where we are at with the car. We kind of circled today in the heat race and we saw the changes helped come feature time.

“I just can’t thank these guys enough – Reed’s Salvage, Patco Transportation, Craig Reed, Carol Reed, my father Brad and everybody on the crew. They put a lot of time and effort into this and to run this competitive you have to do that. So thanks to Mickey Ryan, Guy Myers and everybody who puts that effort into it. Hats off to Soule Racing for two in a row man. They did a great job!”

Also backed by a large throng of “Shoe” fans was third place finisher Dave Shullick Jr. who said of his podium finish, “I think all three of us were driving about as hard as we could. We all were hanging the back end out and giving it everything we had. I didn’t leave anything on the table. We just weren’t very good on restarts. I kind of struggled down between three and four. If I had a strong point it was in one and two at the bottom. I could kind of reel them back in. I want to thank the crew – Steve and Rich Stout and everybody who worked so hard to make this happen. I’m sure Timmy was really happy to win because there was a good friend and a crewman of their team who passed away this week. I’m sure this one is going out to him.”

After time trials and some mechanical attrition, a 27-car Hy-Miler field was poised to take the green. The redraw of the top twelve from the heats found Jeff Locke and Jedrzejek up front at the green. Timmy grabbed the lead and would never relinquish it on his way to a $6,000 payday.

A few yellows dotted the first half of the event with Moe Lilje, Rich Reid, Trent Stephens and Craig Rayvals feeling the affects. At the lap 25 mark, second generation driver Ryan Coniam, in his first appearance in his 46 fell out of a top five spot with a minor mechanical problem. He indicated he felt the Warren Coniam-owned car was really strong in its initial run.

The blue Soule 32 was chased down by first Lilje, then Jeff Locke and Charlie Schultz but second was just not the place to be as Lilje suffered a problem with the right rear caliper, then Schultz ended up in the second turn tire stack on lap 55. Rob Summers, in the Miller 11, running third and possibly on his way to second, suddenly exited the race with motor problems on lap 52 not to return.

Traffic came into play in the latter stages of the race with Lichty at least on one occasion briefly nudging ahead of the Timmy J. Ben Seitz, who had been one of the quick cars over the two days, met with misfortune on lap 90 when he tangled with the 14 of AJ Lesiecki, losing out on a possible strong top five spot.

The final ten laps saw Lichty and Shullick bearing down on the 32 of Jedrzejek as best they could, but their best wasn’t good enough on this night. They crossed under the checkers just that way. Johnny Benson came in fourth behind Jedrzejek, Lichty and Shullick with Eddie Witkum in fifth.

Said Benson afterwards, “Our day was okay. We were just not quite as good as what we wanted  obviously. The car started out a little bit too loose right from the beginning so I knew that at the end it was going to be a little tough. I was pleased that we ran fourth, after how it started. I just didn’t have anything for the guys up front. But, all in all it was a pretty good race. I had one close call near the end there but outside that it was a pretty clean and safe race for me. I was happy with it and with Mike getting a second. I haven’t had the best of luck here. We’ve been fast a couple times, but then had issues. So it was good to get through it tonight and end up in the top five. I think it was a good points night too.”

Witkum was more than pleased with fifth. “After all the work we did, we’ll take fifth. That’s good. It’s been a long weekend. I have to thank Howie, my Uncle Bob, Bill, Tony, Jimmy D – everything finally came together at this race. I was very patient and just played it safe. I waited it out for the first 50 or 60 laps and then went. I should have gone a lot earlier though because the car was really good. The top four were better than me through the middle and I had nothing for them. So, I’ll take fifth. It’s my best finish this year. We needed this. There’s been a lot of ups and downs with more downs than ups. We’ll get it.”

ISMA’s next 2-day race event is at Delaware Speedway in Canada on August 3 and 4.