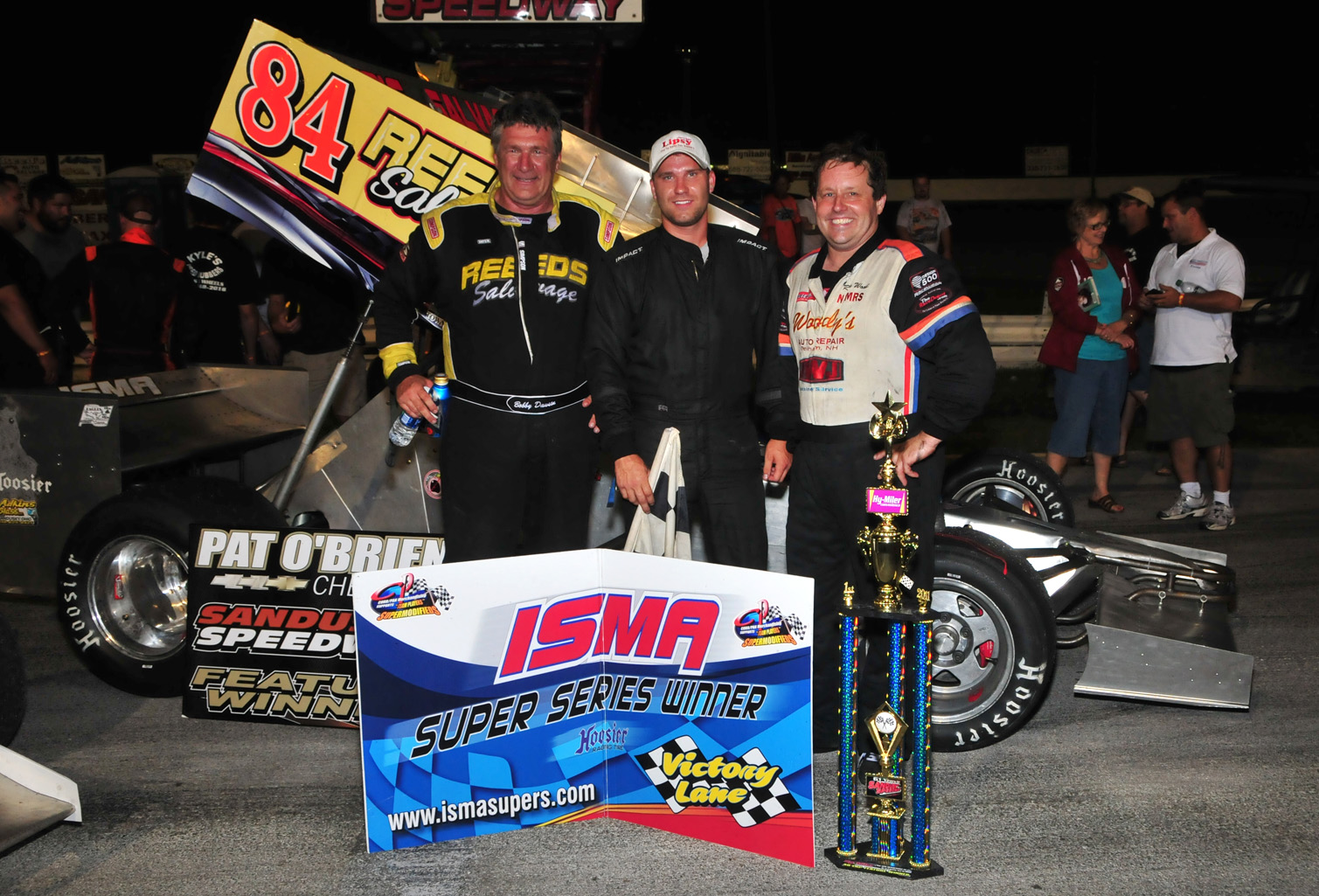 Sandusky, OH – Mike Lichty had driven the Reed’s Salvage number 8 several times this year prior to Friday night at Sandusky’s Hy-Miler weekend. The car gave Mike a big King of Wings win at Oswego and he was really taking a liking to it. When the opportunity availed itself, Mike and his dad Brad decided to buy the car and it brought him into victory lane once again quite nicely. In a hot and highly contested Fast Friday 40, Lichty got by 4-time Hy-Miler 100 champion Russ Wood just past the halfway mark of the race to go on to victory.

“It definitely helps if you don’t have to wear your stuff out in a race, so starting third was an advantage. I just wanted to follow Russ for a couple laps and see what his car was doing. He seemed tight and then loose. We were really neutral in the beginning. I knew it was probably going to come down to lap traffic. I closed in on him a little bit, and then stayed three or four cars behind him not gaining or losing. Then I knew lap traffic was going to be a factor and that I’d have one shot on it. I got on the outside and almost lost it on the outside too, up in the third lane there, but I made it.

“We’ve been struggling with my car. I had a chance to drive this car earlier here and liked it.  We talked with Craig about the car. He asked if he wanted us to build a car. I said no, I would like this one. After the King of Wings show, one thing led to another and we got the opportunity to buy it. Craig is letting us run this motor until the end of the season. I can’t thank the whole PATCO and Reed’s Salvage crew and everybody for tonight. We’re quick. We showed that tonight and at Oswego. We have a little more to do for the 100-lapper, but for a 1-2 finish tonight, hats off to everyone. I’m psyched. This is awesome.”

Bob Dawson, who already has had a great season in the Reed 28, got by Wood soon after Lichty did and finished a strong run in second.  Bob said after his runner-up finish, “I have to thank the Reeds and I have to thank my crew. It was one helluva race car come feature time. This 40-lapper was a warm-up and we’ll just see what happens tomorrow. That’s all.”

Wood, who pulled into victory lane in third with a bent up nose wing making the 29 a bit of an ill handling car, “I bent the nose wing there. It was my fault. I ran into the back of someone. I started pushing after that. I don’t think we had anything for Mike the way he passed us and pulled away. He had us all covered. We’re happy with a third and will try and better ourselves for tomorrow.”

Time trials earlier in the day saw the top 18 inverted into the heats and then the top twelve from there drew for feature spots. The luck of the draw put Russ Wood and Kyle Edwards out front of the 26-car field. Wood immediately took off as Edwards slipped immediately backwards three spots. Mike Lichty took the advantage to grab second and the race was on as Wood and Lichty pulled away from Bob Dawson, Edwards, Timmy Jedrzejek, Jeff Locke and more.

The only race yellow flew on lap 9 when the 88 of Joey Scanlon got out of shape and Locke tagged him. Both cars went off on the hook.

Wood was able to pull away from Lichty on the restart as Lichty had some heavy pressure from Dawson, Jedrzejek, Edwards, Mike Ordway Sr., Tim Ice and Trent Stephens.

By lap 18, the lead duo of Wood and Lichty was approaching the tail of the field and traffic was soon to be an issue. The pair came up on the 14 of rookie AJ Lesiecki allowing Lichty time to close the gap on Wood.  On lap 25, Lichty made his outside move in turn two. Soon thereafter, Dawson repeated the pass of Wood, moving into second. A little farther behind some hot racing ensued between Wood, Edwards, Stephens, Jedrzejek, Mike Ordway Sr., Tim Ice, Johnny Benson, Ben Seitz and Charlie Schultz.

The Fast Friday 40 lived up to its nickname as the next 15-plus laps moved by quickly and without a slowdown. Lichty put some lap car cushions between his 84 and the Dawson car. Dawson would catch up, but wasn’t able to get close enough take threaten Lichty.

At the end Lichty easily passed under the checkered with Dawson, Wood, Trent Stephens and Kyle Edwards in tow in the top five.

Stephens, who started way back in the field, probably made up the most ground in the short event. Said the Ravenna, OH driver afterwards, “The car was awesome tonight. That’s for sure. Starting nineteenth and finishing fourth – that’s definitely a pretty big highlight. It definitely sucks that I had started so far back because I was catching the leaders. I could even see them. Oh well, the good news is that we’re happy, we know we have a really fast car, I drove smart, and didn’t wreck anything.”

Edwards too was happy to finish in the competitive top five. “We had a bad start and got pushed back to fourth. We had a pretty good race car but the 19 got by us. We had a real good run between laps three or four until the end. We’ll work on it and try to finish about four better tomorrow.”