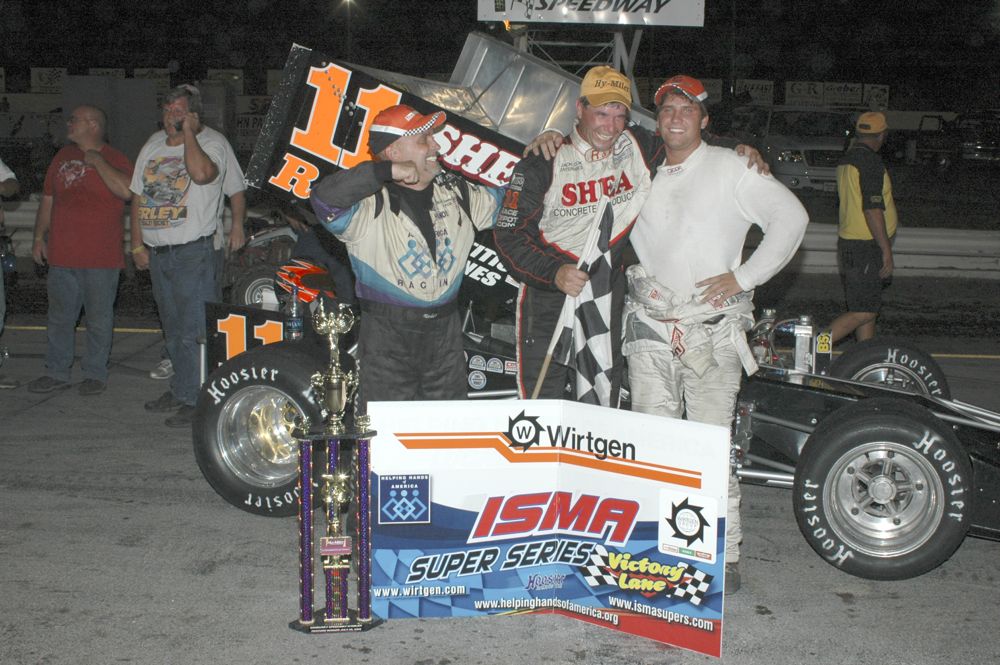 Sandusky, OH – At Sandusky Speedway Friday night it was a 40-lap battle between Mike Lichty and Chris Perley. The war continued into Saturday as the same key players fought for the prestigious supermodified race. The 29th Hy-Miler Nationals 100 could very well have been a second win for Mike Lichty. It proved to be a second win for Chris Perley instead as both nights Lichty had just a little less luck than Perley. Lichty was once again the main man and once again, luck pushed Perley to the forefront. Chris was the first to admit it was really not his race. With fifteen laps to go, Lichty and Perley were one-two on the track, far ahead of anyone else when Lichty suddenly slid his Patco 84 high in turn four, allowing Perley to drive by for the lead and the eventual win.

Perley recounted his taking of the Hy-Miler lead, “I got up to second behind Mike. Again I could only catch him in traffic and then I couldn’t do anything with him. I thought well second is good. And then I was trying to look under him and he suddenly went straight in the corner. He lost his brakes. I’m telling you for two nights in a row for me to win is nice but it’s two nights in a row that Mike should have won. I don’t want to take anything away from him. He’s driving his guts out for his first win. There are a few other people I’d rather take it from than him. Plus I don’t want him to beat me up.”

The new ISMA record-holder for six straight wins in a season, replayed his race. “ I ran the race and for a hundred lapper, I never sat. I never had a chance to say I’ll wait for someone to burn up their tires and I’ll get him. Honestly everybody seemed to be racing every lap and hard. We got up to fourth and that was pretty good. It was a little before halfway. I felt we were in the ballpark, but Ordway was still there and going. We were all struggling on restarts. It looked like it took five laps to get going. Ordway made a power move when Nokie was still leading but the caution came out and it got called back. The next time he didn’t quite make it. And, I decided to try it on the following caution because he did it. I thought I’d make a go at it and it stuck. I was now up to second. I thought for sure Lichty was going to come away with it. The laps were winding down and I couldn’t go any faster than what I was going. He did an awesome job tonight. I thought for sure it was going to be him instead of me. But my crew doesn’t give up obviously. The car has been unbelievable lately. I don’t know what to say. I’d like to thank all my sponsors – R&R Engines for their awesome motors, Shea Concrete, Ed’s behind us all the way. And, Perley’s Marina. “

Lichty was obviously disappointed after a second straight l oss to the seemingly unbeatable Perley. His desire to win was very evident, especially to the man who beat him twice.

As Perley was adding his name to the prestigious Hy-Miler elite winners, Mike Lichty was thinking of what might have been. He said simply, “It was lack of brakes. Lap traffic was a bit tough tonight. But, I guess that’s how it is when you’re running with twenty to go in a race like this. When I shoved up there with no brakes, Chris got us – another night – I’m not impressed with my finish.”

Nokie Fornoro, who took the lead on lap 25 from Mike Ordway, led until Lichty got by on lap 44. He commented at the podium, “I didn’t need any cautions tonight. We were always good on a good hot long run. It just took too long for the tires to come in after a caution – the heat cycles you know. It’s just the way it is. Everybody was at the same disadvantage. I’m real happy. And, once again, how can I say it. Chris is my buddy and I’m happy for him and Vic Miller. I’m also happy for Mike Lichty. It was a great finish for him and the Patco team. I’m also happy for my guys. I’m a bridesmaid again in third.

Mike Ordway, who by virtue of the handicapping, held the pole and the lead right from the start and quickly pulled slightly away from Fornoro and Lichty until a yellow fell on lap 5 for the 19 of Moe Lilje.

Back underway Ordway put the pedal down and left some distance between his 61 and the second place Fornoro, Lichty, Dave McKnight, Scott Martel, Lou Cicconi, Chris Perley and Dave Shullick Jr.

On lap 24, as the leaders melded into traffic, Ordway appeared to bog behind a slower car and Fornoro took the advantage and the lead on lap 25. Lichty grabbed second from Ordway one lap later, but Ordway wasn’t done yet as he held onto third ahead of Dave McKnight, Perley, Cicconi and Martel.

On lap 37, Joe Petro running ninth, spun the 33 and was pushed away to the rear. Perley had just passed Dave McKnight but the flag negated the pass.

On the restart it was Fornoro, Lichty, Ordway, McKnight, Perley, Cicconi and now a hard charging Bobby Santos who had started 23rd in the field of 26 after a rear-end problem sent him to qualify in the consi.

On lap 43 Dave Trytek took a hard hit into one of the huge tires inside of the track off turn two. He was towed off and the race attempted to restart. Santos almost picked off the two cars in front of him on this move, but this two was negated when the flag fell again for Moe Lilje who had just re-entered the race.

On the next green, Ordway got a run and dove outside Lichty and was headed for leader Fornoro when Dave McKnight spun the 94 in two to bring out yet another yellow.

Finally the lap was restarted and on this one, it was Lichty who made the decisive move that put him around Fornoro and into the lead. A couple laps later, on the 46th circuit Perley took third from Ordway as the two brushed somewhat and Ordway, with a bent-up front wing, began to fall backwards as Santos and Cicconi passed him. Ordway, a former Hy-Miler winner himself, left the race just before halfway.

At the 51-lap mark, a yellow, then red fell for the spinning Justin Belfiore who had laid down some oil on the track. Refueling and a cleanup ensued.

Back underway, it was déjà vu as Lichty and Perley began their fight for the top spot. Lichty put some lap cars in between his 84 and Perley’s 11, but the “Rocketman” didn’t get far behind. Fornoro had his own battle going with Santos as Lou Cicconi, Scott Martel and Dave Shullick Jr. chased behind.

With thirty to go, Lichty was fighting by traffic while Perley was reeling him in. By lap 77, the duo pulled up on Lichty’s teammate McKnight to lap him, but Dave wasn’t giving an inch. There still was much racing going on in the competitive race.

It was on lap 85 that Lichty lost yet another attempt at his first ISMA win and a first Hy-Miler win to boot when he slid straight in four. Perley looked up and saw him go off as he headed into the lead. Lichty was able to regain his composure and no flag fell, but by this time Perley had gotten by McKnight and was headed to victory for the sixth straight time in 2006. Lichty held out for second despite his lack of brakes as Fornoro held off Santos for third. Lou Cicconi filled in the top five.

Cicconi was already headed back to Aston, PA when Bobby Santos commented on his fourth place. Said Bobby as he stood in the Lane pit area, “It was a pretty good run. It was a lot of fun to start in the back and to be able to finish in a top five finish. It just got frustrating at the end to follow Nokie for fifty laps. He’s hard to pass. But, I had a good run and I’d like to thank the guys for another great job.”