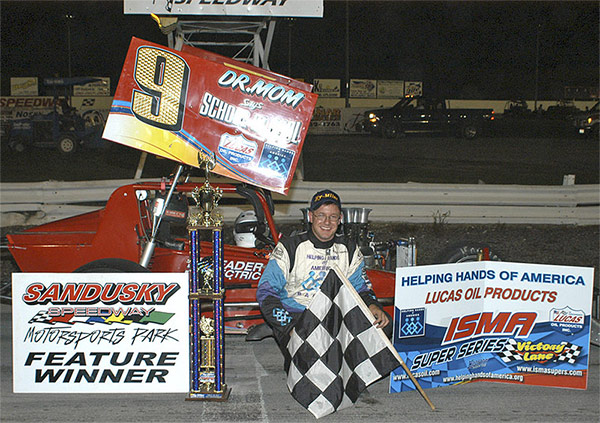 Sandusky, OH – Kyle Carpenter took a pretty hard hit to his shoulder at an ISMA race at Toledo Speedway in June and has been on the mend since. But, Friday night at Sandusky Speedway, the pain lifted for a moment after he claimed his first-ever ISMA win fending off some of the top drivers in the business in so doing. The young Gloucester, Mass. driver led every step of the way in the 40-lap prelim to the prestigious 100-lap Hy-Miler on Saturday. Kyle survived several yellows on his way to his career-first in his short supermodified career and a third coveted win for car owner Howie Lane. Carpenter was elated in victory lane after accomplishing a life-long dream.

“I have to tell you it’s just great to be a part of this. I still remember watching my first ISMA super race at Lee Speedway and Mike Ordway left everybody and won it. Just to be able to race with these people, to be around all of the people and now to become one of the people who have won a super race is a really great feeling. It really is. I never intended to use midgets or the supermodifieds as a stepping-stone to anything else. I don’t want to go to Nextel Cup. I don’t want to go to Busch North. I just want to race supermodifieds. You don’t know how good this is!

Kyle continued on to say, “I have to thank everybody on my crew. I can’t tell you how many times we’ve rebuilt these cars. I have to thank my dad because he puts in endless hours on this car. Howie Lane puts these two cars together. He never gave up on me. Thanks to Tuner for putting these motors in here. And Reader Electric, Dr. Mom Says School is Cool and of course ISMA and Sandusky Speedway.”

Trailing Kyle throughout the 40 laps was Ipswich, Mass. driver Justin Belfiore who could get close to Kyle, but admittedly never close enough. “Kyle pretty much had us covered. I couldn’t do anything with him. I was hoping the race would stay green and we could actually run through some lap traffic and have some fun. But, Kyle did a great job. He was the fastest car from lap one on. . Congratulations to him. I’d like to thank my sponsors too, D&G Modular Homes and Kingsley Automotive Machine tonight – one and two.”

Another young driver who had to work for his third spot was Mike Lichty. Lichty had started seventh and worked his way into third on lap 26, passing Carpenter’s teammate Scott Martel on the way. Said Lichty, “We were just a little too tight. Third again. We’ll take it and we’ll try and get them tomorrow I’d like to thank Lucas Oil and Patco and congratulations to Kyle. Thanks to my dad Brad. Without him I wouldn’t be here.”

Justin Belfiore and Carpenter were on the front row of a 25-car field when the green dropped on the Hy-Miler ISMA 40 with Carpenter slinging the Lane 9 out front from the get-go. On lap 10 things slowed with a multi-car tangle, which affected Bobby Haynes, Joey Payne, Jon McKennedy and Pat Abold. Payne had to pit with a flat left rear. Haynes was hooked and Abold and McKennedy went to the rear.

Carpenter was off on the green, putting some distance between his number 9 and Belfiore’s 8. Scotty Martel moved into third after Payne’s pitstop with Mike Lichty and Chris Perley right there. Joe Petro, Russ Wood, Louie Cicconi, Dave McKnight and Nokie Fornoro were chomping at the bit to move forward. Cicconi, however, brushed with the 94 of McKnight around lap 16 and although no flag flew, Louie had to put the 75 pit side with a damaged axle.

As the race ran green for a number of laps, Belfiore was able to close the gap that Carpenter had built up with Martel, Lichty and Wood in the top five. Wood had moved past Perley by lap 23, but Perley recovered his fourth place spot from Wood a few laps later.

Yellow flew on lap 26 for a part on the track while Matt Seavey and Jack Smith pulled in with mechanical problems.

One lap was complete with Carpenter at the helm before another yellow and quickly red fell for a blocked track out back. Obstructing the flow of the race were Joe Petro, Randy Burch, Mike Ordway, Joe Gosek and Joe Grunda. Gosek was pushed to the pits. Grunda, who already was laps down, headed in. Petro and Ordway received hook jobs while Burch was given his spot back on an avoidance call. A brief fire erupted on the Ordway 61, but it was quickly extinguished.

The race resumed with 11 to go and Carpenter feeling the pressure from Belfiore and Lichty after the field had closed in behind him. But Kyle was up to the challenge and he able to pull away from Belfiore and Lichty. Russ Wood had settled in fourth while Scott Martel held up Chris Perley’s progress forward for a couple laps before Chris put the 11 by to make a run at Wood for fourth but time had run out.

Crossing for his first career feature was Kyle Carpenter, trailed by Belfiore, Lichty, Wood and Perley in the top five.

Said Wood after his run, “The car was okay. There were a lot of top runners in front of me that I had to pass. We’ll just use this as a tune-up for tomorrow. We got everything we could out of it. I lost my brakes there. I was using them way too hard. After I passed Chris I lost my brakes and I had to slow down. Then Chris got me back and I stopped using my brakes. We got that yellow and they came back and I got him back again.”

The yellows that helped Wood, hurt Perley. “We needed long stretches. We tried something different tonight because every time we come here we just don’t get it right. I don’t know if we got it, but we didn’t go backwards. We had fun in that long stretch racing with Russ racing back and forth. Tonight we needed more laps. Tomorrow we’ll probably need less. I think 63 laps will do it tomorrow.”

Rounding out the top ten were Martel, McKnight, Abold, Fornoro and Sammut.