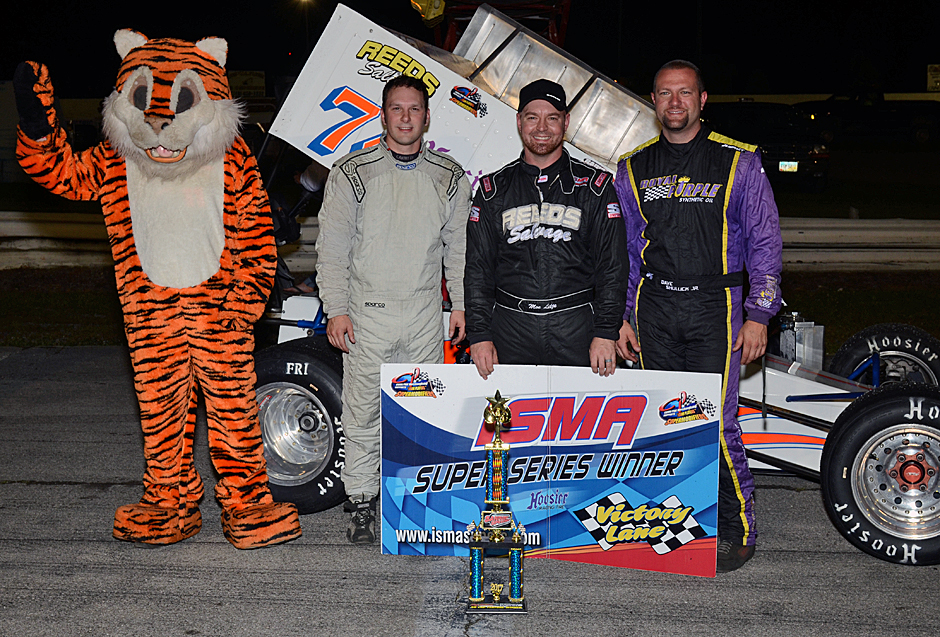 Sandusky, OH – Vickery, Ohio’s Moe Lilje admitted in victory lane after his first career Fast Forty win at Sandusky Speedway, that it had been a while since he had won at that Ohio oval. He has won more recently however. The Fast Forty ISMA win was his career third, coming off a big win at the Star Classic last September in the Jimmy Bodnar 76. A long rain delay Friday did not deter Lilje, whose season had not been up to his potential so far, from finally turning the tides, putting in a spectacular run out front for the victory. Starting outside front row, Lilje was able to survive several yellows, and a number of strong challenges from some of supermodifieds’ best on hand for the famed Hy-Miler weekend.

Said the very happy driver in victory lane, “Tomorrow is the one we wanted this weekend but after the way our year has started I won’t turn this one down. I have a lot of people to thank. Obviously Brad Lichty and the whole PATCO team. I mean the year that we’ve had. We’ve been fast every week and have had one tough break after another for any number of reasons. These guys are resilient and they don’t give up. I’m glad I was able to deliver them a win tonight.”

Second place finisher Dave Shullick Jr was not quite as elated with his performance. “I didn’t have enough car tonight, but we stuck with it. We’ll make some adjustments and come back tomorrow. I think we’ll be okay. Moe’s a good friend and we’ve been teammates before. First and foremost I wanted to see him win. I’m a little disappointed with Hoosier and ISMA if this is the best tires they could bring here. I know we’ve seen a lot of good racing here in the past and we need to work on the tire package that ISMA is bringing to the track right now. Do we think we have what it will take to win tomorrow? Absolutely. We’ll keep working on it. We’ll get it there.”

Third place Micheal Barnes was understandably pleased with his first ever run in the Miller 11, bringing home a podium finish.

“ This is great to be here in third filling in for Chris Perley. Really, we didn’t touch a bolt on the car all day. We just got in it and drove. We made some stagger adjustments and I just got comfortable in the car. I can’t thank Vic Miller enough for giving me an opportunity to drive for him, and thanks to Scotty and Leo and the guys who worked to get me adjusted to the car. I can’t be happier than to be here on the podium. I think we’ve got a good shot tomorrow. I definitely burned the tires up tonight. In a 40-lapper you can just go. We were tight tonight and we have to set up a game plan for tomorrow. A hundred laps is a long time. But, if we conserve on the tires, I think we have a good shot.”

The first yellow of the race came at the drop of the initial green on the field of 28 when Michael Muldoon’s 15 came around in turn four in the frantic start. He was pushed off and a complete restart found Lilje quickly take the helm. With only one circuit complete, yellow flew again and this time it affected Dave McKnight, who had something break on his 70, with the 22 of Mike McVetta also stopping with a broken oil drive. Slowing for the incidents were Ben Seitz, who had gotten tagged by another car which caused his 37 front end damage and Otto Sitterly who had spun in the multi-car incident. Sitterly was the only car to return to action with McVetta, Morton and Seitz going pit-side.

One more quick yellow occurred on the restart of lap 2 when the 07 of Kenny Sharp slid off the track in turn one. He was able to return.

The race now went non-stop as Lilje was able to take the Lichty 74 a distance out front while Barnes having just been introduced to the 11 during the day, maintained a close watch in second, trailed by Ordway, Shullick, Bowes, McKennedy, Edwards, Timmy Jedrzejek, Trent Stephens, Mark Sammut, Mike Lichty and Talon Stephens in the top ten.

The 24 of Jonathan Lesiecki stopped on the front straight on lap 7 slowed the pace once more with that car headed to the pits.

Now it was clean green from this restart as the field went into high gear with some great racing throughout the remaining distance. Lilje maintained his lead on this green but Barnes was able to get up close to make a serious challenge. Waiting in the wings were Ordway, defending race champion Shullick Jr., and Bowes who was pressured by Trent Stephens for fifth. McKennedy was right behind that duo now contending with Timmy Jedrzejek for the next spot.

With Lilje out front ready to encounter lap cars, Shullick made a move on Ordway for third. That put Stephens right on the tail of the 61 as the laps flew by.

Lilje hit more lap traffic with two lap cars facing him on lap 17, again allowing Barnes to close up the gap, but also allowing Shullick to gain ground. On lap 26, Shullick caught Barnes and passed him while Lilje lengthened his lead on the battling duo.

Lap cars slowed Lilje’s progress around lap 30 and once again Shullick and Barnes were knocking on the 74’s back door much to the delight of the crowd who had turned out despite the weather which delayed the starting hour.

On lap 33 Lilje caught and passed one more lap car which gave him a little cushion over Shullick, Barnes, Ordway, Jedrzejek and Stephens still racing hard behind. Stephens moved by Timmy J to take away fifth on the last circuit..

The checkers flew for Lilje shortly after midnight with Shullick, Barnes, Ordway and Stephens the top five.

Ordway, who has definitely hit some low points during the season in the 61, was pleased with his strong fourth place run. “We chased stuff all day, had a couple part malfunctions. We missed the first practice, only getting two laps in that. We gained on it quite a bit in the second practice. Then had another problem in time trials, but still put down a decent lap. It just caught up with us in the feature. Basically it was not enough time on the track with the set up that we needed. It’s definitely better then we’ve been in the past few weeks. We definitely got something to work with tomorrow. We should make big gains tomorrow and hopefully get one.”

Trent Stephens, another driver who has faced some bad luck this season to date, said “Fifth is good finish for a crappy start to the day. Then I got fast time and then screwed it up in the heat. Starting fifteen and finishing fifth is not too bad. I think we had a little more in it but had some bad luck as usual. So I’m happy with it. The car is really, really fast. I don’t see any reason why we won’t be battling for the win tomorrow. We just have to get a little luck on our side. Definitely got to thank the crew. We brought a good race car today. Hope it stays that way for tomorrow.”

Racing continues Saturday with the running of the prestigious 40th Hy-Miler 100, the first of the Triple Crown races each season. With potentially six previous Hy-Miler winners in the field, along with a strong group looking to join them, it should a barnburner!

Consi – scratched due to lateness of hour.