MIKE ORDWAY LEADS ALL THE WAY AT SANDUSKY FAST 40 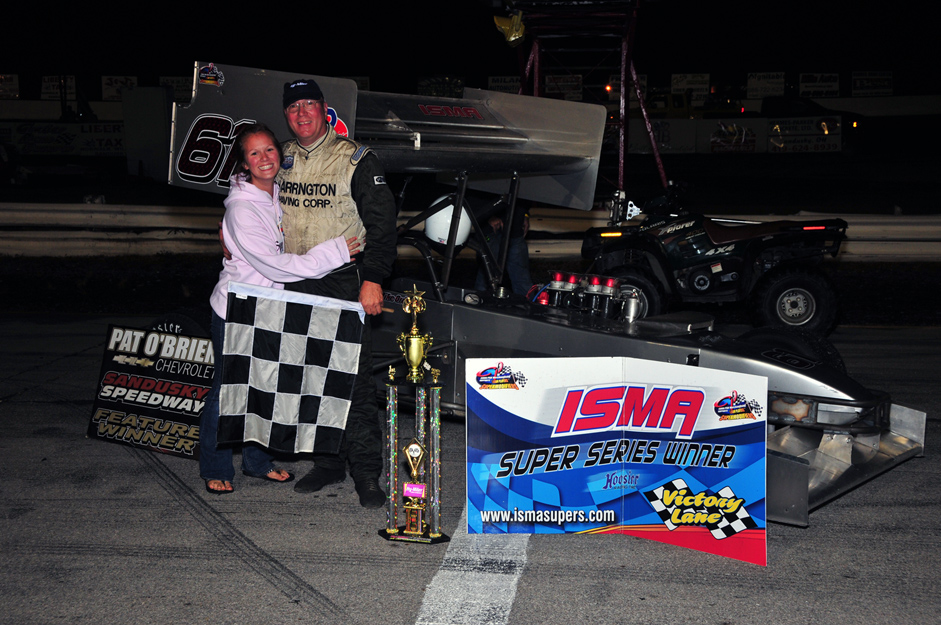 Sandusky, OH – The Friday racing at Sandusky might not have even happened if it had not been for the perseverance of the speedway’s management to hold out despite a heavy down pour that came just prior to the ISMA qualifying heats. After a lengthy delay to dry the track and a series of cautions just getting the 40-lapper started, Mike Ordway fought off all adversity to lead the entire way.

It was well into the wee hours of Saturday morning when Ordway Sr. brought the Booth 61 into victory lane. Ironically, had it not been for his main challenger, Mike Lichty, a win might not even occurred. An oil-down of the track and a subsequent spin by Ordway almost put him to the rear. ISMA rules do not include a spin-to-avoid scenario, and when the yellow flew for Ordway and Benson they were about to be sent to the rear. But Lichty and others argued that this was a different situation. And, they won. Ordway was first to acknowledge the Lichty effort.

Lichty, who hounded Ordway for the win ended up a close second, although he might have argued his way out of a first place.

“First of all I want to apologize to all the fans for the slow start getting the race going. And, then there was the oil on the track. When Mike and Johnny had spun out I just felt it right to stop and tell them to give those guys their spots back because it wasn’t them who put the oil down. It was just a horrible race track all night long. I think we put on a pretty good show. I was on the inside of Mike a couple of times and might have had him when the caution would come out. I just have to thank everybody on the crew. We’ve had speed this year. We’ve won two races already and this is the weekend we want – Hy-Miler. I just have to thank Reed’s Salvage, Patco Transportation, Dickie, Brian, the whole crew – everybody puts on a great effort, a great teammate and Level Performance for a great motor. Hats off to everybody.”

Mo Lilje drove a long way forward to get to third and he was pleased with the podium finish. “We worked pretty hard to get what we got. I would have liked to start a little farther toward the front but I pulled the 12 pill. But that’s usual if I pull a pill, that’s where I start. I definitely want to thank all the fans that hung around and stuck it out to watch us. I’d like to thank all the sponsors, Mr. Reed and the whole Reed family for giving me a good hot rod. Now I’m looking forward to the 100-lapper.”

The ISMA time trials went off without a hitch with Mike Lichty clocking fast time. The top 18 were inverted into the heat lineups, but darkening skies threatened to end any further activities. The rain came and went and the track was dried, however with all racing concluded albeit well past 1:00 am. Eddie Witkum Jr., Bob Dawson and Lichty won heats with defending Hy-Miler champion Timmy Jedrzejek claiming the 12-car consi.

After the redraw of the top 12, Bob Dawson and Ordway led the way to green, but mayhem was the word for what appeared to be an interminable first circuit. Crashing and banging affected many with Joe Gosek in the May 77 and ISMA point leader Lou Cicconi the only two unable to start after the messes were cleared.

Ordway dove out front when the race finally started pulling Lichty with him past Dawson. For ten laps the Ordway-Lichty ensued out front as Trent Stephens, Johnny Benson, Moe Lilje, Charlie Schultz and rest of the competitive pack, chased.

Coming off turn four as the ticker approached lap 11, mayhem reared up again when a slick of oil sent Ordway and Benson spinning and stopping. During the massive cleanup the pleading for positions took place with the final decision being to let those who spun because of track conditions not of their own volition, could continue in their spots. Several cars pitted including the Rayvals 94, which was deemed the oil culprit.

Only a few laps were complete when yet another yellow fell for Schultz who had been running sixth behind Ordway, Lichty, Stephens, Benson and Lilje. Eddie Witkum’s 97 expired here with a flat and axle damage.

It was evident on these restarts that Ordway and Lichty were the class of the field out front with the Mikes suffering through a yellow on lap 24 when Schultz’s 7 spun in 2.

On this restart while Lichty was looking for a way around Ordway, Stephens closed in on Lichty’s bumper just as the final yellow flew for Kyle Edwards’ number 1.

Ordway and Lichty continued their battle while Stephens lost ground and eventually third to Moe Lilje with less than ten to go. Lilje now headed for the lead duo, but time ran out as Ordway, Lichty and Lilje crossed under the double checkers. Dave Shullick Jr. was closing in on his teammate Stephens when time ran out for him as well.

Said the fourth place finisher Stephens, “The car was really tight. We missed the tire stagger by quite a bit and that hurt me all night. I was really good on restarts and I was trying to get some positions there. It almost worked. Fourth is good but I was trying to get a third. It would have been my best ISMA finish if I had.”

Shullick, who started back behind Lilje commented, “It was a good race but I had to start way back. I felt like I had a good car early in the going. I had some good restarts but they unfortunately got called back with all those crashes. I just had to pick one and was able to walk away with a fifth tonight. That’s pretty good for us and I’m looking forward to tomorrow.”

Action continues at Sandusky Saturday, July 28 with the 35th running of the Hy-Miler Nationals.