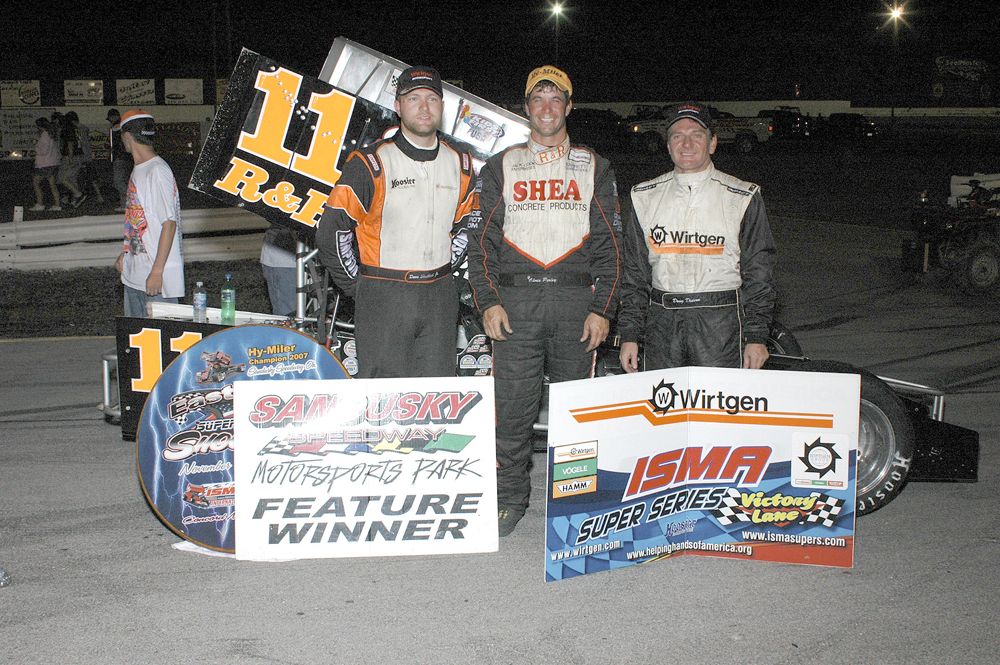 Sandusky, OH – Chris Perley and the Vic Miller crew continue to roll over the competition and Saturday night at Sandusky, it was not easy task. But, Perley seemed to make it look that way. Starting 12th in the 28-car field, which included one of the strongest Hy-Miler fields in a while, Perley took over the lead just shy of the halfway mark, dodged some bullets and went on to lap almost the entire field. The prestigious 30th annual Hy-Miler 100-lap victory was the team’s sixth win to date on the ISMA-Wirtgen tour this year. It also earned Perley a guaranteed spot in the Budweiser Int’l Classic, Sept. 2 and the East-West Shootout in November.

Once again Perley acknowledged his amazement on what has transpired over the last season and a half and he conceded the winning hasn’t gotten old yet. He philosophized a bit after the race, “People get on rolls and half the time you don’t know what starts them. And, then you don’t know what stops them. And right now I have no clue. I know we’re still doing good and trying not to screw up. We’re hoping it continues but nobody knows. It’s crazy. There’s no reason for it to happen. We didn’t pass many cars out there tonight for the lead. They were all wrecking in front of us. Everybody is just doing what they can with what they have. Things just didn’t fall into their hands tonight; it fell into ours.  The car didn’t break. We barely missed a couple deals out there tonight. We made it through them. It’s just awesome. I love Ohio. Two years ago I couldn’t finish here.”

He continued, “I can’t believe how good the car was. We started out a little loose and I was a little scared of everybody behind me. I figured if I didn’t have the car for it tonight, I’d get the lead and make them go by me. And, then the car actually turned tight. It just got better and better. To come to Sandusky and win this race again is just unbelievable. I have to thank everyone on the team. And the  awesome motors by R&R, Ed Shea, Perley’s Marina, New England Motor Racing Supply, Vic Miller… everyone.”

While Perley was out front riding the rails, the action heated behind and in the waning laps, the shuffling was in the top five spots. With five to go it was Mike Lichty, Dave Shullick Jr., Doug Didero and Dave McKnight out front of the Rowley Rocket who was lapping at their heels. As the checkered flew for Perley, Lichty’s 84 sputtered and Shoe II grabbed second as Lichty dropped back to fourth behind Didero.

The second-generation driver was happy with the runner-up spot. “It was a pretty good race. These guys are a good group of drivers. The lap traffic was tough but it was a good race all around. I got by dad on a restart and it was unfortunate that he got wrapped up in that incident. I think he would have been up there.  I’m sure he’ll live to race another day. It was another good Hy-Miler.”

Doug Didero, who had a wing strut break in time trials, had a long way to go for third. With no time trial for handicapping, he worked his way through the heats and consi to start 17th.  Hot and tired in victory lane, he was smiling nonetheless. It was a very exciting race. It seemed like so many things happened right in front of us and we avoided them all and got through it all. And, we ended up with a really good finish at the end. The way we struggled this weekend I never thought we’d have this good of a finish at Sandusky. We didn’t even get a time trial and we had to start last of everybody throughout the whole day and just keep working at it every race. We had to run up to the front from the back. And, that’s what we had to do in the feature tonight.

Everything stayed good. The car stayed pretty consistent all race long. We’re just ecstatic. We had some really great racing at the end there. It was a clean race tonight. Everybody drove real well. That’s what makes it fun. We’re happy to be leaving here with a third. This may be a good starting spot for all the ISMA shows. We’re looking forward to Mansfield.

Thirty-nine cars returned for Saturday’s 30th running of the first leg of supermodified’s big three extra-distance events with the field pared to 28 after time trials, heats and consis. Jeff Holbrook and Ohio racing legend Dave Shullick Sr. brought the field to green with Holbrook, in his new Allegresso designed machine, grabbing the initial lead. He held the top spot until Gene Lee Gibson passed him just prior to a yellow that flew on lap 11. Nokie Fornoro had expelled fluids on the speedway which collected Gibson and sent several others spinning around as the yellow changed to red. Fornoro was out. Gibson was out. Rob Summers, who had had a tough weekend already, was into the pits. Jeff Holbrook was into the pits and ofn.

When the dust settled, the top two cars were in the pits and Mike Lichty was the leader trailed by Timmy Jedrzejek, Mark Sammut and Dave McKnight. The battle up front would involve Lichty and Jedrzejek for the next ten laps or so as Timmy J tried every which way to get around Lichty for the lead. Just behind the dueling duo were Mark Sammut, Dave McKnight, Justin Belfiore, Dave Shullick Sr. Perley and Dave Shullick Jr.

On lap 20 Jack Smith slowed dramatically off turn two and while trying to limp to the pits, was accosted by Justin Belfiore who was full throttle trying to hold off Perley’s charge to the front. The yellow flew and both cars were towed away.

It was still Lichty, Timmy J, Sammut and McKnight out front of Perley as the yellow flew again on lap 24 for a spin by Vern Romanoski. This was easily taken car of but on the restart, mayhem ensued. Bobby Dawson, who was running strong, lost a wheel and in so doing, shot across the track right in front of Shullick Sr. while cars scattered down the front straight to try and miss the accident. Involved were Rich Reid, Bob Magner, Michael Barnes, Mike Ordway Jr. and Lou Cicconi, who spun to avoid. Red was out and refueling allowed as the cleanup took place. Out of the action were Shullick Sr. and Dawson. Ordway was able to get back on track as was Magner, Barnes and Cicconi, who went to the rear because of a no-spin to avoid rule adopted by ISMA last year.

Back underway, Lichty was still in command with Timmy J breathing down his back. The action was heated as Canadians Sammut and McKnight tried to hold Perley back.  It didn’t work for too long as the 11 moved into third on lap 28. Behind the 94 and 78 were Didero, Shullick Jr., Charlie Shultz, Moe Lilje and Johnny Benson Jr.

On lap 30, Lichty seemed to be pulling away from Timmy J out front. Perley continued his march and was second by lap 34. On lap 37, Perley was able to get ahead of Lichty but yellow saved the young driver when Rich Reid spun in 3.

On the restart Lichty was well aware of who was knocking on the door and he was able to slam it several times before Perley got alongside on lap 44. The pair rode around side by side for almost a lap before Perley nosed ahead for the lead.

Lap cars started to dot the way between Perley and Lichty as the halfway mark came and went. Lichty, Timmy J, McKnight and now Shullick Jr. also had to contend with the cars Perley left in his wake. The final yellow of the race fell on lap 60 when Charlie Shultz had a tire going down. He was able to pit and return.

The race was Perley’s now to lose and that was not about to happen. In the interim Mark Sammut’s good run came to an end with a broken steering arm.

Perley laid waste to the field in the remaining twenty laps as Lichty, McKnight, Shullick Jr, Didero and Timmy J wove through traffic behind him. On lap 93 Perley was up behind Didero. Chris said later that he was just trying to keep the guys behind him who soon ended up ahead of him as he lapped them. Lichty’s fine run fell short of fuel giving Shullick Jr. second, Didero third, the 84 fourth and teammate McKnight fifth as Perley was doing his victory lap.

Lichty settled for fourth but would have liked the second. “We had a good run going there. We just missed a bit on the tires and Perley got by us. I mean boy is he tough. He was just flying tonight. I don’t even know if we had the tires we could have run with him or not. We were just a little bit off from the tires and that hurt us. We definitely had second wrapped up until the white flag when we ran out of fuel. I’m not sure what happened. Last night was my night and I made a mistake. Tonight it was someone else’s. I guess that evens it out.”

Dave McKnight was once again in the Perley hunt. “Fifth place. What can we say? All three cars had a good run. We’re all in one piece. We’re still struggling. We haven’t got quite what we need. Hats off to Chris again. That team is just on a roll. So, we’ll just have to get our stuff together and go to Mansfield and see what happens. We seem to be right there all the time but in the bridesmaid spot. We just have to stay focused and keep working at it. We’ll get it. All in all we’re happy with the Patco-Stage Door team performance tonight.”