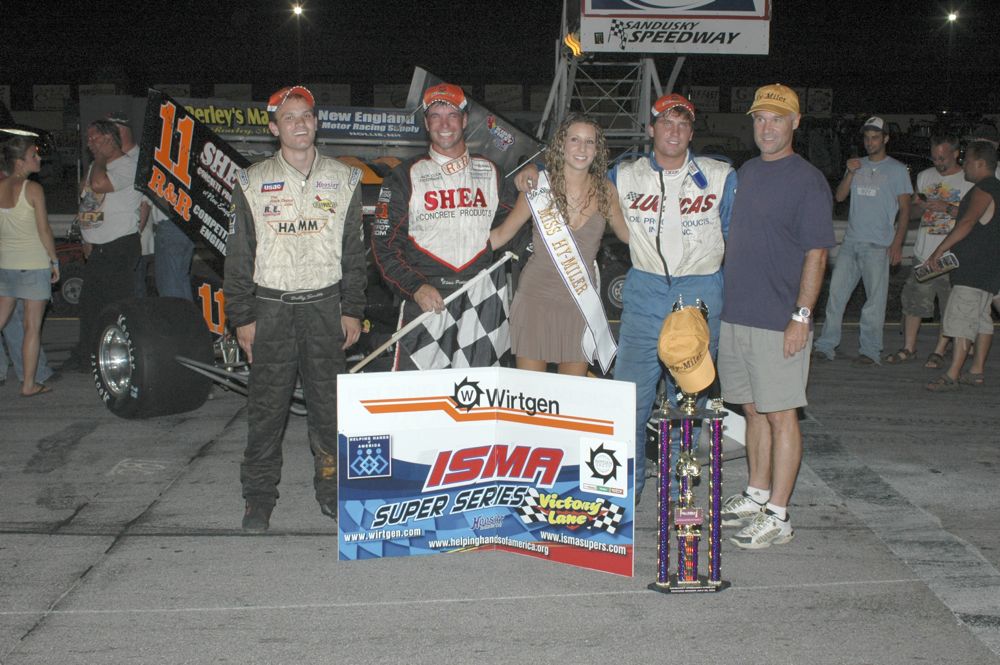 Sandusky, OH – Chris Perley has never had good luck at Sandusky. As a matter of fact he’s probably not finished a race there. But, on Friday night his luck turned. Starting twelfth on the field of 26, Perley ran down Bobby Santos and Mike Lichty to take the lead with five laps to go. Perley had the yellows fall his way this time, but that’s how it’s been most of this season. Perley admitted in victory lane that he’d been lucky once again.

“Mike Lichty was gone. I never would have touched him. I really didn’t think I’d get either Mike or Bobby Santos. I got loose but on restarts the right rear cooled down just enough so I got one attempt. I got Bobby on the first one and then we had another caution. Unfortunately for Mike, I got by him too. I didn’t want to take it away from him. He’s been knocking on the door. I got a run. Somehow I stayed in front of him afterwards. What a race. This is awesome. I can’t believe I won at Sandusky! One more track.

“We’ve been on a roll, but it’s not without the work behind the scenes and everybody just stays with it. Yes the momentum is running us right now. We’ll just stay on the wave until it kicks us off and see what today, tomorrow and the next week brings us. Thanks to all for coming tonight and we’ll probably have a little party later.”

Mike Lichty, who took the lead after just four laps into the 40-lapper, looked to be headed for his first win of his ISMA career. But, the yellows were not with Mike and the shoe was on the other foot for Perley. A bit disappointed in victory lane, Mike commented, “I didn’t need those cautions. I thought I had the race in the bag with about ten to go. But then caution, after caution after caution. On the last restart I think I got out driven by Chris Perley. That’s how it goes though. Hopefully tomorrow we’ll be in front of the number 11 car. Tomorrow is a long race and we’ll see what happens. I’d like to thank everybody on the crew. We were third last year here and tonight second. Maybe first tomorrow.”

Bobby Santos, who has been a tear in the USAC midgets, ran second to Lichty for many laps until Perley got them both using the cautions. “Chris is pretty good. He took advantage of me on that restart. He beat me. I made the wrong move and he got me. It was a good run and I have to thank Howie and all the guys for doing a good job. I’m a little disappointed with third. We’ve been having a good year with the USAC midgets and it’s fun to race the supermodified also. Everything you get in from both divisions gives you experience. The more seat time the better.”

After three heats and two consolations, the Hy-Miler ISMA-Wirtgen field was pared down to 26 cars. Doug Heveron, driving the Holbrook 35 took the early lead but Mike Lichty stormed by on lap four leaving the Florida resident to contend with Scott Martel, Santos, Michael Barnes and Dave McKnight.

By lap 15 nineteen-year old Lichty had a healthy lead as he began to lap the tail of the field. He had some lap cars as a cushion, but not for long as Santos moved by the same cars to take over second while McKnight, Perley, Heveron and Barnes chased at the halfway mark.

Perley was moving the Vic Miller 11 up each lap and by lap 25 he was third behind Lichty and Santos. The top trio moved away from McKnight. Oswego limited super driver Barnes, in his first-ever trip to Sandusky and his fifth supermodified ride, held a firm fifth over Scott Martel, Dave Shullick Jr. Nokie Fornoro, Heveron and Bob Magner.

The first yellow of the race fell for Heveron on lap 35 who had planted the Holbrook 35 in the fourth turn wall.

On the restart, the field bunched but a lap car sat between Lichty, Santos and Perley with a top more lap cars between them and fourth-place runner McKnight. That restart never completed as the flag unfurled again for Justin Belfiore who sat sideways in turn three.

This was the first of advantages for Perley. On the next restart, the “Rowley Rocket” grabbed second from Santos. Another yellow flew after that lap was complete when Magner, Shullick and Ryan Coniam were involved in a front straight melee. All three were hooked.

Perley’s cooled right rear used the next restart to get Lichty diving low under the 84 in turn one. Five quick laps flew by with Lichty now chasing Perley as Santos, McKnight and Martel chased them.

Perley crossed safely under his first-ever Sandusky checkereds and his sixth feature out of eight ISMA races run, as the above-mentioned quartet finished behind him.

McKnight, the second team Patco car to finish in the top four was content with finishing let alone fourth. “It was a good night for the Stage Door-Patco transportation super number 94. We have struggled the last four races with a dnf, a dnf and a couple more problems – a no show at Stafford. Just getting back in our game made us happy with the run tonight. The guys did a good job and worked hard. Chris won again tonight but I think everyone is catching up. Tomorrow is 100 laps. I’m happy the motor just stayed together. A sold fourth and a good run tonight for Mike. Too bad the cautions fell where they did. I’m sure he could have won the show, but that’s racing. Someday it will work in his advantage.”

Martel, who took over the driving chores of the Budnick 88 when Randy Ritskes was injured at Waterford, was pleased with another fifth place.

“The Shea Concrete, -Bruce Budnick -owned 88 was running really good. We’re getting there. We don’t have anything for Chris but we’re getting to be a consistent top five car and I feel good and Bruce feels good. Tomorrow night is my kind of race so we’ll perform in that one. ”

Sixth through tenth place finishers were Nokie Fornoro, Lou Cicconi, Barnes, whose car went away on the cautions, Dave Trytek and Justin Belfiore.