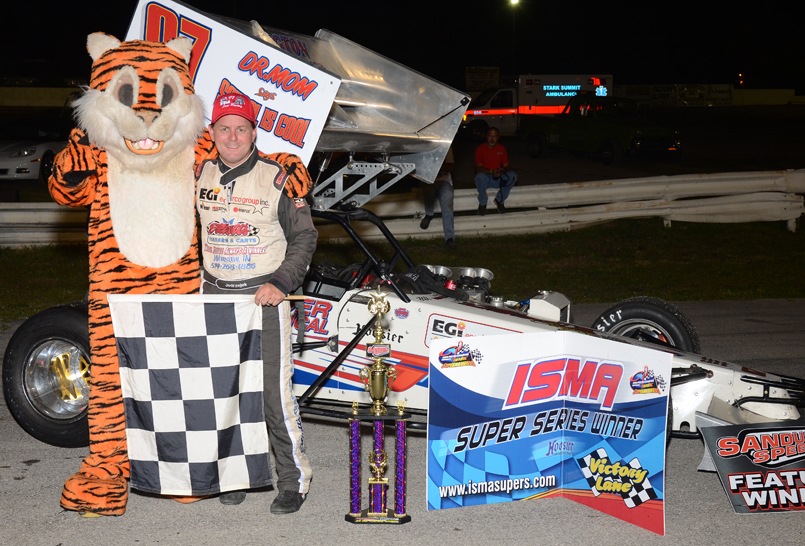 Sandusky, OH – If Friday night’s Fast Forty supermodified main event at Sandusky was any indication of things to come on Saturday, well hold on to your hats fans, you’re in for a wild ride. The battle to the finish between race leader Timmy Jedrzejek and fellow Ohioan Dave Shullick Jr. was one for the ages. In the end, after a couple late race yellows, Jedrzejek came home with the checkered flag with Shullick not far behind in second. The results brought out the approval or disapproval of the large, vociferous crowd on hand as the dueling duo pulled into victory lane. There were moments when any slight slip up of the two might have ended with one or both not in the victory circle.

Jedrzejek described his race and those last laps in the post-race interview: “It was an exciting race. We started in the 5 spot and after being the 16th place qualifier, I wasn’t happy. The crew kept telling me to hang in there, hang in there. We made some good improvements for the heat race. We raced from sixth up to third and got that transfer spot that we needed. Then I got a fifth starting spot in the main, The car was working really good. I don’t know how many cars I passed on the outside, but it must have been all of them to get up there. The 64 got little high going into three and I don’t know if he missed a corner or not, but he opened the door. I just went around on the bottom. He just sort of gave it to me. I think he was starting to slip a little bit due to his tires. I then felt like I had a good lead going but then that caution flag came out with seven laps to go. I don’t know how big my lead was but I didn’t hear anybody up to that point. A car showed me a wheel there at the end and I defended the best I could. I think it’s my race until he does get a position on me and then he’s in control. I raced hard. Maybe I used up some, but with five laps to go it’s going to be a battle. We both ended up here on the front stretch. One of us is happy and one us is not. Hopefully, we put on a good who for the fans. That’s what it’s all about really. Congrats to DJ and Mikey Barnes for finishing second and third. We’ll move on to tomorrow. It’s all we can do.”

Shullick, who finished second coming up through the field from his 14th starting spot, had just a few words. “I just came from a long way back. I was disappointed with the outcome, but we’ll be back tomorrow.”

Michael Barnes, who drove the Vic Miller 11 to a third place podium finish, sat in what might be called the best seat in the house as he watched the battle in front of him unfold. He acknowledged that fact saying, “We were pretty good once we got going after about 10-12 laps the car started coming in real good. Guys started fading a little bit and my car got tighter and tighter. Actually it was getting a little too tight. But it was good. We reeled them in. When the caution came out toward the end, after we had gotten up to third, that one kind of hurt us. I would have liked to have just stayed green because we were actually reeling in the 95. After the last couple restarts I just couldn’t keep up with Timmy and DJ. The way they were running together I thought maybe we were going to inherit one. I wouldn’t want to have seen anyone wreck but I would have been ok with it. That was entertaining…watching those two for sure. I want to thank Eddie Shea and Vic for the opportunity and Leo, Scotty and Steve for all their hard work today.”

Jim Paller and Rich Reid led the field of 23 down to the green with a quick yellow affecting Trent Stephens and his brother Talon before a lap was complete. Trent ducked in for a tire change and Talon was restarted after a spin.

By lap 5, Paller was able to get a small lead over McVetta , Reid, Seitz and Jedrzejek as the race began to play out.

A lap 7 yellow saw the May Motorsports machines of AJ Lesiecki and Preston Walker take twin loops in turn 2. Both would restart and the racing resumed with Paller out front.

Jedrzejek got his chance at Paller just before the lap 20 halfway mark leaving Paller to contend with McVetta, Shullick, Seitz, Edwards, Barnes and more in the fast-paced race.

With ten to go, Jedrzejek had put a lap car or two in between the Lane 97 and Paller, Shullick, McVetta, Barnes, Seitz, Edwards, Reid, Benson, Sammut and Lilje still hot on the trail.

A lap 33 yellow proved to be the game changer so to speak. It was here that Paller spun the 64 in turn two. He was able to restart, but this bunched the hungry masses behind the 97.

Shullick who had taken second just prior to Paller’s spin, was now on Timmy J’s number when the green waved with seven to go. The two ran side by side until Jedrzejek was able to pull slightly ahead as Barnes, McVetta, Seitz, Edwards and Benson were still trying to close the gap.

One more yellow fell on lap 37 when the 74 of Lilje pulled quickly into the pits and a piece of debris was needed to be removed from the first turn.

The shoot out that transpired between Jedrzejek and Shullick on this restart was intense as the duo once again rode side by side into the corners. At the checkers it was Timmy J, Shullick, Barnes, McVetta and Seitz the top five.

McVetta, who had brought his old car and new car to the track to run each in practice, pulled into fourth with the old car. He said later of his fourth, “The car was good but it was just too tight. We couldn’t really do too much with it unfortunately, but to come home fourth is a great day. Anytime on the ISMA trail a fourth with so many good cars. I can’t thank my guys enough for giving me a good car. It was reliable today so that’s a big plus. We’ve been fighting that with this one. So we’ll see what tomorrow brings. We’ll build on it. We were running the old car tonight. Maybe we’ll bring the new one out. It all depends on how they practice.”

Seitz, in the Soule 32, finished fifth, his best finish to date with the new creation, was pleased. “It was a good run. We started third. We were really tight. It’s a new car and we still have a lot of work to do. But, it has potential. We were happy with a fifth. After kind of playing defense most of the race fifth is not too bad. The guys really have worked hard. At Monadnock we were pretty far off and they basically changed the whole front end of this car. They did a lot of work. I’m really happy with the results. I need to thank all the crew, Danny, my sponsor Cape Cod Aggregates, Ken’s Collision, Dave’s Body Shop, Saves… all those guys help keep us on the track.”

The action continues Saturday with the Hy-Miler Nationals 100 and with the Fast Friday combatants each having two Hy-Miler wins to their credit, the duel for a possible third should be one not to miss!