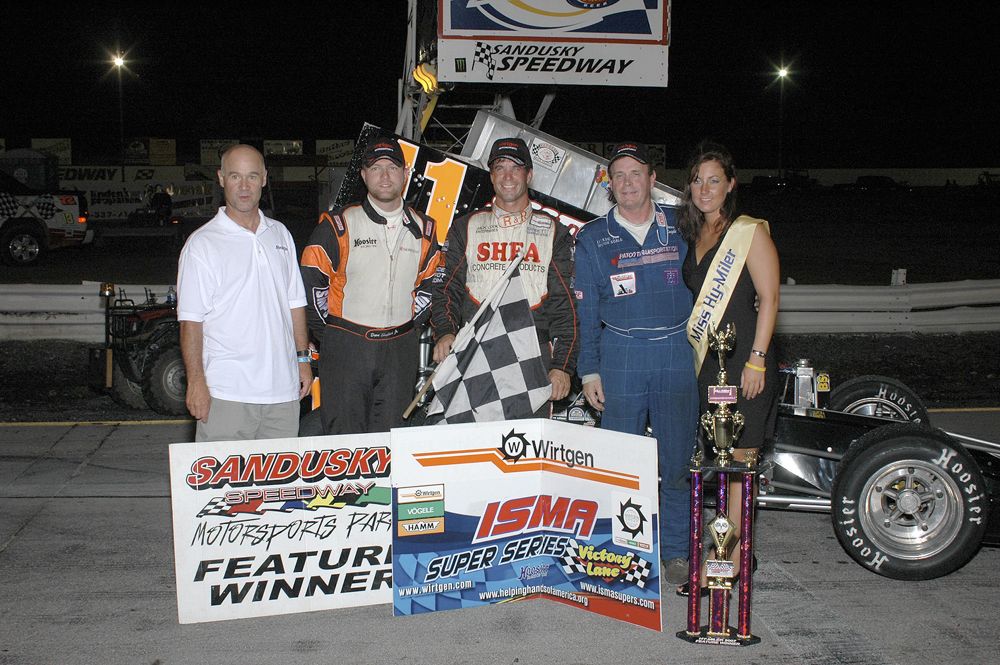 Sandusky, OH – Chris Perley continued his unbelievable performance on the ISMA-Wirtgen super series circuit Friday night at Sandusky. And, Perley continues to shake his head in disbelief. He once again set fast time and after starting 12th in a strong field of winged supers he worked his way quickly to the front. A challenge of his seemingly omnipresent rival Dave McKnight came once again as McKnight took the lead of the 40-lapper on lap 21 with Perley behind him. On lap 30, the 11 slung outside by the 94 off the fourth corner of the Sandusky half-mile, to take the lead from the Canadian – once again.

Standing in victory lane for the second consecutive year at Sandusky’s Hy-Miler prelim moments later Perley exclaimed, “This is crazy,” said the Rowley Rocket. “This was an intense, intense forty lapper. I got there and I couldn’t get there. On the restarts I was slower and couldn’t get going. I caught Dave and then I couldn’t do anything. I couldn’t get to the outside. I thought I’d used it all up and then my car starting coming in. I just kept it out there – heating up the tires. Then all of a sudden I had a shot. I bounced off his right rear once down in three and four. Luckily it didn’t hurt either one of us. I made it stick. It’s phenomenal. I’d even take a second over a first if I can’t have a first. We’ll just see what tomorrow brings.”

McKnight, who had taken over the lead after his teammate Mike Lichty lost the lead to a spin on lap 21, was once again standing in second next to Perley on the podium. “Always the bridesmaid it seems this year… always the same car,” said the Brampton, Ontario driver. “The wreck at the beginning of the year set us back, but we’re real close. We’ll work on it some more and maybe we’ll have something for Chris. Again, it was a great job for Chris and hats off to the team. Everybody there did a great job and my guys did a great job too. We’re real happy.”

Finishing third after a great move in traffic in the waning laps was Dave Shullick Jr. He had passed under both Nokie Fornoro and Lou Cicconi – no easy task- to take the spot. He had passed his dad, filling in for the injured Randy Burch, earlier in the race, also in traffic. Said the Shullick Jr., “We know how traffic goes here. All three of us were about pretty much the same. I just tried to bide my time. They were being pretty aggressive and Nokie got pushed up there and I tried to take advantage of it. I just tried to capitalize on restarts. I got my father on one. Other than that it was a pretty clean race. Dad did pretty good. He got loose a couple times and was able to save it. He had never driven that car and he’ll be back tomorrow to see if he can do even better. Perley is a tough nut to crack but we’ll go home and keep working on it. We’ll come back tomorrow and hopefully we can one better him.”

Despite threatening rain, things progressed nicely at the Friday Hy-Miler prelim. With 41 supers in the pits and after time trials, four heats and two consis, the 26-car field was filled. Lou Cicconi and Mike Lichty were out front at the green with Lichty taking the front spot from the git go only to see the yellow fly for Gene Gibson who had brushed the wall and exited the race.

Lichty, who narrowly lost both legs of the Sandusky tradition last year, took off again in the lead on the restart. He was lapping cars by the eleventh circuit as Dave McKnight and Lou Cicconi battled for second.

When the yellow flew again on lap 13, Robbie Summers, the most recent ISMA winner at Stafford, was off the track in turn one. A brush with Doug Didero was the possible cause. The yellow fell again due to a jumble on this restart between Joe Grunda, Ray Graham, Jr. and Larry Lehnert.

The race resumed with Lichty holding a lengthy lead as McKnight, Cicconi, Nokie Fornoro and now Perley, in the top five. Sitting a tick back were Dave Shullick Sr. and Shullick Jr., Mark Sammut and Jeff Holbrook.

By lap 19, the Perley had put the Vic Miller 11 into third in a scenario oft repeated in the past year and a half. On lap 21, leader Lichty was the cause of the final race yellow, as he got up in the loose stuff between three and four. He was able to restart, but his lead was gone.

Dave McKnight was now the new leader but that left Perley in second right behind. Cicconi and Fornoro had the “Shoes” right behind as Sammut, Holbrook, Didero, Timmy Jedrzejek and Moe Lilje were still locked in battle behind.

For the next seven laps, Perley tried to maneuver around McKnight, but Dave, bent on getting that elusive win, held him off.

On lap 29, Perley tried McKnight but the door was shut. On lap 30, Chris put the 11 outside McKnight off the fourth turn and made it stick this time. He was on his way to win number five on the season. Dave was able to get close in traffic in the last laps, but never close enough to pass. Working every lap behind, Dave Shullick Jr. was able to pass not only his legendary father but also Nokie Fornoro and Lou Cicconi to take the third spot. Cicconi and Fornoro settle into the top five.

Cicconi, who had just a couple races on his new 75, was content with fourth. “Everything was good tonight. We’ve made a lot of progress on the car. I really enjoy working with Timmy, Eddie and Matt. I’m looking forward to tomorrow’s race.”

Fornoro applauded Perley’s prowess once again. “Hopefully everyone had a good, safe night and it seemed like everyone did. Once again congratulations to Vic and Chris on their win. Hopefully we can have something for them tomorrow. It was great that there was a great crowd tonight. Thanks to the Soule racing team for a great job and all the sponsors for supporting us.”

Dave Shullick Sr., jumped aboard the Burch 52 and showed he hadn’t lost much after a four-year hiatus. Even getting passed by his son, didn’t faze the driver in his fourth decade of supermodified running. “The car felt really good tonight. It didn’t go away. To be honest I was a little conservative. We wanted to save it and make some changes for tomorrow. I physically felt very good. I had a cramp in my leg and my side earlier, but it all went away. I was really disappointed when the white flag came out because I was just starting to get my groove on. I didn’t want to see it end. Earlier I wasn’t sure I could do this. It’s been four years since I was racing a lot. I did one race a few years ago, but I felt very comfortable in the car.”