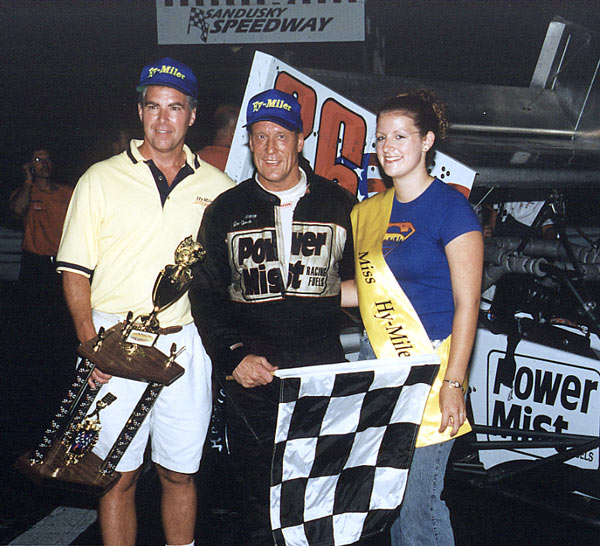 Sandusky, OH – Joe Gosek stood in victory lane on what was actually Sunday morning at Sandusky Speedway after a long rain delay tried, but failed, to finish the race before Joe did. What could have been a complete washout turned into a third Hy-Miler win for the Oswego driver who, along with others, waited out a hard rain storm that hit the Ohio speedway just as two laps of the 100 scheduled were complete. Thanks to the perseverance and hard work of all involved, the race was able to continue, albeit much later than expected. Joe was a tired, hot and happy victor in the winner’s circle. Despite the rain, his Dunigan-owned 26 performed flawlessly to give Gosek the $6,000 win.

Gosek described his race to the huge crowd that had waited patiently to see the 25th running of this prestigious Hy-Miler event. “Last night we had a good car and we got in a jingle. Maybe not being as patient as I should have been. The guys kind of busted me for that. I came back tonight and tried to drive a smooth race and the win came. The car just worked good at the start and it worked good at the end. Thanks to Paul Dunigan, Brian Allegresso, Doc and all the guys. This is a great win for us. My crew chief said we were

going with the car the way it was after the rain and it worked. I kind of hung in there at first and bided my time. The car came to me late and I just picked it up and got the lead. I saw that Russell wanted to stay on the bottom and I had a car that could go up top. I just watched where he was slow and I was quicker. I figured I’d make that one jump and surprise him. Once you do that it’s kind of like ‘who the heck was that’! So, I got the chance to surprise him and got the lead. I just ran as hard as I could the last twenty or so laps. I don’t know how much I was in the lead but I don’t think anyone was knocking on the door.A third Hy-Miler. That’s a good accomplishment. Paul Dunigan couldn’t be here. He had some tests in the hospital. This win’s for him. This is a good team and we have fun.”

Gosek’s teammate, a three-time Hy-Miler winner in his own right, Russ Wood had taken the lead from Gosek on lap 44, but lost it again on lap 79 as the two fought for the title. Said Russ later, “I’m glad it’s over. It was a long night. My car was good in the middle of the race but I just started getting tight and Joe started to get better there. He just blew us away. We didn’t hold back tonight. We were going to take what we could get. Once I got in the lead I figured I might just as well go in case it rained again. I just got tight and Joe was hooked up. He got me there in three and four like nothing… he was gone. ”

Mike Ordway, who settled into third late in the going, felt that was all he could get this night. “This was a rough one,” said Mike simply.. “This was the 24 hours of Sandusky. Tough. It was a tough race. We were coming up but just got worn out. We just couldn’t go any further. That was all I could do… third spot.”

Chris Perley set fast time earlier in the afternoon in time trials. Scott Martel, Dave McKnight and Gene Lee Gibson, driving a Bill Kovacs super, won the qualifying heats. A four-teen car consolation qualified the last six in the field with Denny Fisher the winner in this 12-lapper. Jamie Letcher used his ISMA option to bring the starting field to 25.

Gene Lee Gibson led exactly two laps when a yellow fell for Friday night’s winner Ken Bell and the 88 of Jon Gambuti. As the 32 and 88 were being tended to, rain began to fall and things began to look dismal. Thunder, lightning and huge raindrops hit the Sandusky 5/8th mile scattering fans and competitors to seek shelter. But weather reports had the storm moving fast and with a brisk wind to assist, vehicles began to dry up the track and at just after midnight, the green miraculously fell.

It was Gibson, Bentley Warren, Gosek, Dave Shullick Jr. and Dave McKnight the top five as racing resumed, with Pat Shullick, Chris Perley, Scott Martel, Wood, Ordway and Cicconi all looking for a Hy-Miler win right behind. Gibson’s lead continued until a lap 8 yellow fell for a spinning Howard Page. Gibson had Bentley Warren on his tail on the restart and by lap 14, Gosek had moved into third around Dave Shullick Jr. On lap 15, Gosek passed another of his Dunigan teammates, Bentley Warren, for the runner-up spot. Back in the

pack, Mike Ordway appeared on the move as he picked off Martel, Perley and then Pat Shullick to sit sixth by lap 20.

Gosek was chasing Gibson through traffic when another yellow fell. Bentley Warren’s 17 slowed suddenly on the front stretch and blew its motor as Warren tried to head into the pits. Dave McKnight, with no where to go, was collected in the incident. A lengthy cleanup allowed McKnight to pit and get back out into the fray.

On this restart, Gibson seemed to be pulling away from Gosek while Ordway and Russ Wood moved into the top five, but the top five was about to change quickly.

On lap 33, Gene Gibson’s 77 went high and then spun low as Gosek and Dave Shullick Jr. tried to avoid the leader. Said Gosek of his near miss, “For some reason we all got high and it seemed like there was oil on the track and all of a sudden guys just spun. I don’t know how I got through.”

Gibson and Shullick Jr. were out of the picture now as Gosek took up the front spot on the green trailed by Ordway, Wood, Martel and Pat Shullick. But, Wood was on the move and by lap 42 he was tucked up behind his teammate Gosek, looking for a way around. He found it on lap 43 to take the lead. The raced passed the halfway mark, and was into the record books with Wood and Gosek out front. On lap 55 Eric Shirey brought out the yellow with a spin off turn three, bunching the field.

Ordway made a run at Gosek on this restart, but couldn’t make the pass, leaving Wood and Gosek alone out front once again. Martel began to challenge Ordway as Pat Shullick had Chris Perley trying to take away fifth. Lou Cicconi and Greg Furlong joined in the battle for a chance at Hy-Miler gold. A Jamie Timmons spin on lap 67 slowed things once again but Wood and Ordway were able to pull away from the next six in line on the restart.

Gosek started to gnaw away at Wood, looking, as he said, for a weak spot to pass. He soon found it and on lap 79, took away the point from the Pelham driver. Wood’s New Hampshire compatriot, Ordway held off a pack consisting of Martel, Pat Shullick, Perley, Furlong, Joey Payne and Timmy Jedrzejek as the laps wore down.

As soon as Gosek made the pass of Wood, “he was gone” as Russ put it later. A few lap cars allowed for some furious battling near race end, but as the checkered fell on the 26, there was no one close by. Nor did Wood have any challengers at race end, but Ordway, Martel, Pat Shullick, Perley, with a broken side panel on his wing, Timmy J. Furlong and Payne fought to the finish in that order. Dave McKnight, a victim of several pitstops, finished up the top ten.

Said Martel of his fourth place finish, “That was a long 100 laps. We’re happy. You come into one of the Classics and hope to get a good finish. I thought at one point we had a shot at a win. It was early enough. I was pacing myself. But the car stayed consistently loose the entire race. I was able to race and have a good fight with Mike. I’m happy to come out of it with fourth. The way things have been going, I’m happy with fourth. I was glad I was able to stay down on the bottom groove because after the rain, I knew no one was going to go around me. Mike was leaving me the whole inside to attempt to pass him. I just couldn’t get enough bite to get out of the corner and under him. I’m happy for the crew. It’s been a long stretch here with ISMA. A lot of races and a lot of travelling We’re looking forward to getting home.”

The first Ohioan over the line, Pat Shullick, was grateful for fifth. “It was a well fought fifth place for me. It was tough. The car just wasn’t right for me We were a fifth place car. and that’s where we ended up. I knew Perley was here. He poked a nose in a couple times. I did see him. I gave him room but he never made it quite far enough to get by. ”