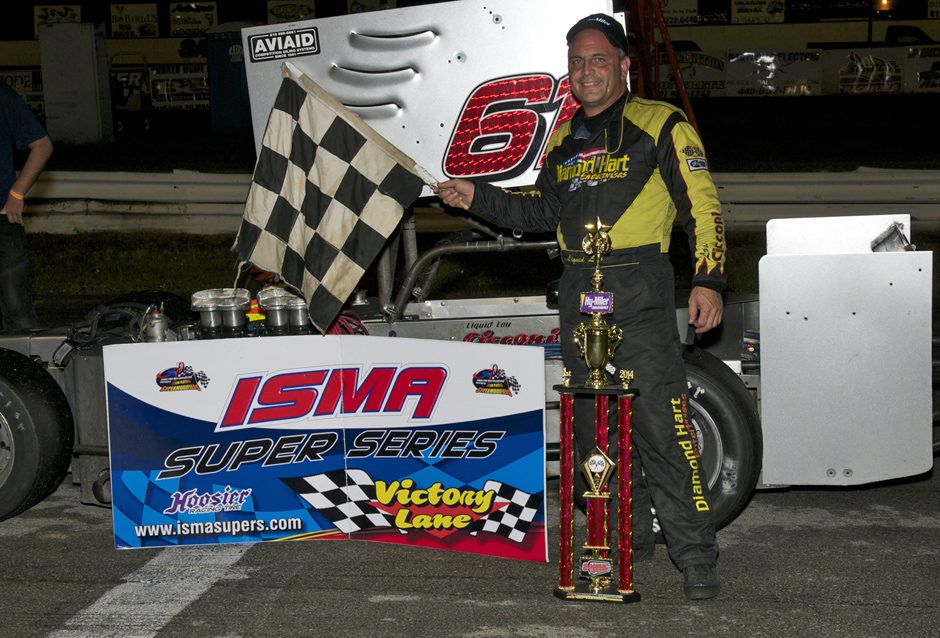 Sandusky, OH – In the early hours of Sunday morning, the frontstretch of Sandusky Speedway in Sandusky, Ohio turned into a big party after Lou Cicconi captured his first Hy-Miler Supermodified Nationals win by holding off Moe Lilje in a classic ISMA Supermodified event.

Cicconi started on the outside of the front row and would take over the top spot from Jeff Locke on lap 16 of the 100-lap event.  Ciccone held on to the lead as the red flag flew after 37 laps for rain that surprisingly popped up over the track.

After a three and a half hour delay for the rain to stop and dry off the track, Cicconi brought the field back to the green flag.

Cicconi kept leading lap after lap while working his way through lap traffic.  Behind him, Bobby Santos, Mike Lichty, Moe Lilje and DJ Shullick were trying to chase down the leader.

Lichty would fall of the pace with a mechanical problem on lap 65.

With 20 laps to go, while in heavy lap traffic, Santos tried to make a move for the lead, but Cicconi wasn’t going to give up the top spot.

On lap 82, Santos began to fade and Shullick took over the second spot.

With seven laps to go, Shullick would go to the outside of Cicconi going into turn one, but couldn’t get the bite needed to make the pass. Lilje then challenged Shullick for the second spot and would get by him with four laps to go.

Lilje tried to chase down Cicconi, but it was he ran out of laps as Cicconi gets the win.

After the checkered flag, Lilje got alongside Cicconi to congratulate him but the two touched and spun in turns one and two.  Cicconi joyfully walked to victory lane with is car being pushed behind him.

“I think half of the battle for me was the starting spot.  I just knew if I drove smooth and precise, they weren’t going to pass me,” Cicconi said after the race.  “I didn’t know if the lap traffic was going to hurt me, because my car wasn’t good on the outside.  I wasn’t sure what was going to happen.”

Cicconi was very focused on getting through the lap traffic, that he didn’t know when he was being challenged for the lead.

“I don’t know who was beside me.  I just heard the noises and the flashes,” Cicconi admitted.

What does the win mean for Cicconi?

“It means everything man.  I almost won this race before but got in a crash and came close a couple of other times, but never got it,” Cicconi said.  “Now, I finally did it.”

Lilje was hoping to give Cicconi a run for the win, but was still smiling with his second place finish.

“We were close.  We were right there,” Lilje said.  “There ain’t much left in the tank for the old girl and I let it all hang out with about 20 to go and used the whole thing up.  I would like to think that if I could have cleared DJ (Shullick) two laps earlier, that I might have had a better chance.  But it was a hard fought battle.  DJ and I have raced for a long time and have a pretty good mutual respect for each other.  I was right there but not enough.”

Shullick, who was the fast qualifier, came home third.

“We just gave it everything we had, and we probably didn’t have a car that could win this race, but we were close to doing it,” Shullick said.  “I gave it everything I had.  We got shuffled back there a little bit.  I think in clean air we could have won it.”

The ISMA Supermodifieds will return to Lee USA Speedway in Lee, NH on Friday, August 8th for the Ollie Silva Memorial.