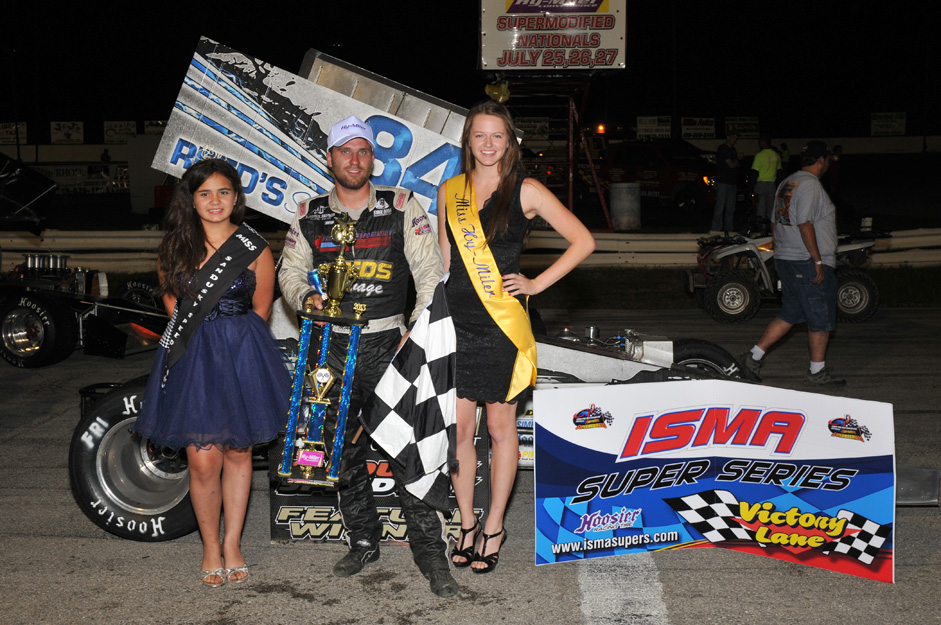 Sandusky, OH – Innerkip, Ontario’s Mike Lichty had swept the last two ISMA feature events with relative ease but Friday night he had to contend with a strong running Dave Shullick Jr. for a number of laps before claiming a third consecutive victory. The side-by side, lead swapping racing between Lichty and Shullick started on lap 9 and ended on lap 28 when Shullick’s 94 broke a brake caliper ending the heart-stopping battle out front. Lichty admitted in victory lane that the battle would have continued had Shullick stayed in the fray.

“We were totally a mess in practice to be honest with you. Then we went on to set quick time and had a decent heat race. Coming into the feature we really didn’t know what we had because there has been so much rain here. The first 12 – 15 laps the car didn’t feel that well on the track. I wasn’t sure it was because of the fuel load or not. I’d like to thank Louie for racing me clean. I love racing with him and the whole Vic Miller crew.

“When DJ got by me, I knew he was hooked up rolling along good. I was down on the inside pinching myself trying to get back by him. I think I used up a little of the tire. I slipped the tires a bit so I just calmed myself down and got behind him. He checked out about three or four car lengths but we were fortunate enough to reel him back in a bit in traffic. But then he pulled out. I think it would have been a heck of a battle if he’d stayed in.

“I just want to thank Reeds Salvage, Patco Transportation, everybody at Rockaway Building Supply, Stage Door Transportation, Tommy Ecstruth, Stewarts Appliance, all the guys in the shop, Dickie. Ryan and Zack. Dennis Level and the guys at the motor shop they build a helluva motor. They all work their butts off. It’s good to see my teammate Moe in third. We’re on a roll and that just shows how hard these guys work. I’m just fortunate to come and drive this car.”

Early race leader Lou Cicconi lost the point to Lichty on lap 6 after several yellows plagued the start of the 40-lapper. Cicconi had a great view of the 84-94 battle from third until Shullick’s demise left him in second but no match for the high-flying Lichty.

Said Cicconi, “I don’t know how entertaining it was for us when DJ and Mikey outclassed us all. I got first in class! We didn’t do too good making changes today now we’ll have to change a lot. We’ll evaluate tonight and see what’s happening and hopefully we can make some changes to help us keep up.”

Moe Lilje trailed Cicconi by a couple car lengths at race end but he was happy with a podium finish. “Since my win at Chaudiere we have had some problems but I think we got them ironed out. We started off pretty fast today. We got going but the tires and stagger closed up. We didn’t have anything for Mike or DJ, but if there had been a longer green flag run we might have got Louie. But, I had her hung out there the last couple laps so I’m not sure. The run was good enough for a podium and the important thing is we got two good runs for Mr. Reed. And, we have a good piece for tomorrow.”

Thirty winged supers filled the pits and ran through time trials, heats and a consi to setup the 26-car field for the usually quick 40-lap go. Unfortunately, this race saw more than its share of yellows causing the double checkereds to fall just before midnight.

Four caution flags fell between laps one and ten affecting Mike McVetta, Bob Dawson, Ryan Litt, Jim Paller, Dave McKnight and Kevin Jaycox Jr. and seeing a pit stop by Charlie Schultz. Most cars were able to return and the slow and go activity saw Cicconi lose his lead to Lichty on a restart and then set up the side-by-side battle between the Canadian driver and Dave Shullick Jr.

Lichty would lose his lead to Shullick but then run alongside nosing out front of the Ohio driver time and time again until Shullick appeared to pull slightly away but Lichty was never far away for very long. Back a good distance Cicconi held off Lilje, Tim Ice, Trent Stephens, Jeff Locke, Ben Seitz and more as the race ran green.

Traffic began to play a key role just past lap 25 as the dynamic duo out front entered some tail end cars. Suddenly, the whole exciting scene ended when Shullick pulled to a stop near the flag stand and was done for the night.

Back underway and one lap later, fourth place runner Stephens spun putting him to the back of the field. Two more laps saw Lichty in command with Cicconi a distance behind when Ben Seitz followed Shullick’s lead stopping in front. He was sixth at the time. He also was into the pits and done for the night.

With ten to go, fourth place runner Tim Ice flew the red when his 65 sailed off the third turn and into the muddy field below. While his car was extricated from the quagmire left from the previous week’s rain, the cars on the track were allowed to refuel due to the number of caution laps run.

Finally, the green fell on what would be the final laps of the race without stops. Lichty was certainly the class of the field now as he pulled quickly away from Cicconi, Lilje, Locke, Charlie Schultz who had been coming like gangbusters, Kyle Edwards, Stephens, Sammut, Trevor Berry and Matt Marlowe, the top ten.

Schultz, who had started tenth, gone to the pits and to the rear, was happy with his fifth. “Coming from back there twice was tough but I think we have a pretty good piece for tomorrow. The first 10-12 laps I knew it was way too free. I knew I wasn’t going to be able to go anywhere. I thought I better come in and make some adjustments to try for tomorrow. I came back out, started at the rear and the car was pretty decent at the beginning and then it kind of just stabilized and there at the end it was really good.”

Fourth place finisher Jeff Locke had left the pits due to the lateness of the hour and was unavailable for comment.