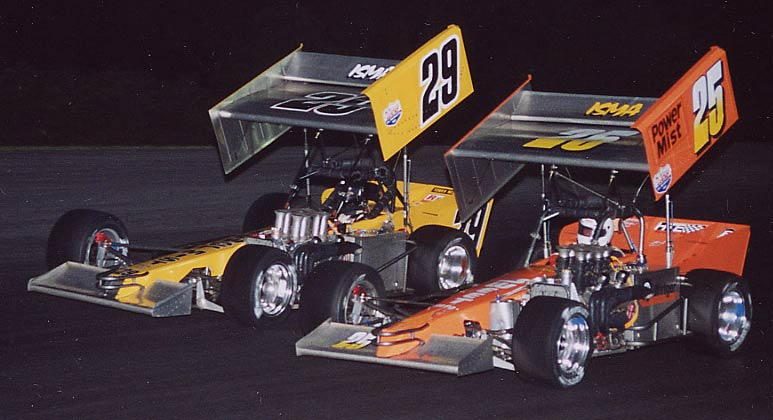 Sandusky, OH – “It wasn’t looking good earlier,” said ISMA point leader Russ Wood after his Sandusky Hy-Miler 100 win Saturday night. But, it certainly looked better from where he stood in victory lane hours later, with his fourth career Hy-Miler win and the $10,000 check that went with it. Wood blew a motor in practice laps prior to the time trailing and the Dunigan crew worked feverishly to replace it in time to get the Pelham, NH driver into the prestigious event. Starting 23rd in the 26-car field, Wood worked methodically forward until he passed race leader Joe Gosek off the third turn on lap 94 to lead only the last five laps of the 26th annual 100 lapper.

Wood replayed his day and night later in victory lane. “It wasn’t looking good earlier, said Wood as his two children struggled to carry dad’s trophy back to the pits. “We lost the motor and of course that is

never good. I always have an outlook that whatever happens, happens. We changed the motor, didn’t make it in the heat and then ran the consi just to get in the race. All that mattered was to get in and then stay out of trouble. Fortunately the racecar was good. I missed a few close wrecks. We just got all the breaks. The crew did a heck of a job. I did all right. The whole package was there. Pat and Bentley also had good finishes. So it’s a good night for the team. This was a hard Hy-Miler win. It was nerve racking with the motor change. I really didn’t like how it was running. I just wasn’t as smooth. I told Brian we’d just do the best. We started way back and went into it with a positive outlook. It all worked out. . This is a fun racetrack. The action is heavy and there are a lot of good local guys. We like to step it up and try to run good with them. This track has been good to me. This track suits my driving style. I love running here.”

Joe Gosek, driving the Dave May 77 for only his second outing, led the way from lap 35 until Wood took over late in the going. Also looking for his fourth Hy-Miler win and the first for his car owner, Gosek had it almost all in hand but just missed his goal.

“It was a good run for me,” said Joe. “To come out here and get in a car they really haven’t run that much. They kind of let us do what we wanted with it. We talked back and forth. Last night it was all right and today I think we made it a little bit better for a longer run. Last night I got a little loose. I

think everyone is happy with a third and a second. It’s not like a win. David was looking for a win, which he has never gotten in all his years here. We tried. Russell was better. We raced him clean. He just had the better car and he got the job done. My hats off to him. It’s a great team and I know how good they are. I’m proud of these guys here too. They gave me a great opportunity for one, since I don’t have a ride. I’ve had a great year all around for not having a steady ride. I’m disappointed to lose that late in the race. But, naturally that’s normal. I’m just proud of the whole thing. It was a fun time and we got some good results.”

Finishing a solid third was one of Wood’s teammates, Pat Abold, a former Hy-Miler winner in his own right. Said the Pennellville, NY driver who had set fast time earlier in the afternoon, “It was a great run. Three cars in the top five – we’re extremely pleased. I certainly would like to see the outcome switch a little bit, once in a while. I’m really getting used to the team and the car. Tonight proved it. The car was sort of consistent with the last three races, last night. And I communicated with Brian and Doc and they did a wonderful job changing the complete car around and giving me something I could work with tonight. So, we’re one step closer. This isn’t an easy deal to win anymore. There’s a start to the season again, but we’re starting to come on strong again. . Once we loaded it up with fuel, it freed up the car a little. We had a good car but there were just too many guys going really good. I think it’s coming. We are really jelling well and I’m really having a lot of fun.”

A long, warm Hy-Miler day began with time trials, which saw the top, twelve lined up front in the heats. With seven cars taken from each of three 10-lappers, only three spots remained to be filled from a 17-car consolation. Justin Belfiore, Russ Wood and Lee Boss were the three in the wild affair. 2001

Hy-Miler champ Dave McKnight was not and he used his ISMA option to enter the field as did Moe Lilje from the MSA organization.

Scot Martel jumped out to the early lead in the 100-lap go leaving a strong-running Jamie Letcher in his wake. Martel’s race ended just ten laps in when the drive shaft went on the Martel 14 leaving Letcher at the point with Pat Shullick, Gosek, Abold and Randy Ritskes vying for position.

Shullick was all over Letcher for several laps before getting by on lap 22 to take over the front. The Vermilion driver was looking for his first Hy-Miler win before a hometown crowd. Joe Gosek moved into second on lap 26 but Pat Shullick was a distance away at this point. Letcher still held third with Abold, Ritskes, Mike Ordway, AJ Davis, Greg Furlong, Bentley Warren and Chris Perley sorting things out behind.

Being the leader wasn’t too lucky as things turned out. First Letcher exited the field on lap 33 with a blown radiator then moment’s later leader Shullick was over the bank between three and four. A flat rear was the culprit and he was able to reenter the field. Brad Lichty, Ken Bell and Ritskes used the time to pit.

It was now Joe Gosek’s turn to lead, as Abold and Ordway were the hot pursuers. Gosek was able to pull away as Abold and Ordway battled each other lap after lap. At the midway mark, the boys began to close up the gap that Gosek had built as a few lap cars were cleared from between them. Furlong pulled into the mix and the large crowd on hand watched the action with anticipation of a classic battle to come. But, back in ninth now was Wood, picking his way through the crowd in the long green run. But, one of his main contenders in the point battle, Chris Perley lay ahead as did a strong running Jim Shirey, a one-time Hy-Miler winner, Davis and Bentley Warren. And, that was not including the top trio.

The man on a mission, however, was Ordway. Having won the Friday night prelim on several occasions, Mike had indicated that Saturday’s event was the one he wanted. By lap 65 the 77-26 and 61 were nose to tail but Ordway finally put his car around Abold for second on lap 68. With thirty to go, Gosek had his hands full with now Ordway and Abold pressuring him every inch of the way. Gosek

was able to hold out for only two more laps before Ordway took command. Once again, however, the lead was not the lucky place to be.

Mike Ordway would be denied for the umpteenth time, his Hy-Miler win. In just one sweep of the fast Sandusky oval, Ordway went from first to the pits. On lap 73, Johnny Payne spun off the speedway. Spiking the brakes and making a sharp turned doomed Ordway as he broke a steering bolt, ending up against the inner guardrail as the yellow flew. The 61 was done.

Joe Gosek reclaimed the lead with Abold, Furlong and soon, Russ Wood challenging. Bentley Warren. Jim Shirey, Davis and Perley were right there in the hunt.

The last caution of the race flew on lap 80 for a minor spin, but it was enough to red flag the race for fuel. Spartanburg, SC’s Davis lost his top ten finish as he pitted. Also heading into the infield was Perley, who was just behind Davis in eighth at the time. Chris, who had been up to fifth behind Warren, was obviously in need of a stop. Said the Rowley, Mass driver who had moved to

Back underway and headed for the last 20 laps, Gosek kept the 77 out front of Abold and Wood as Furlong held off Warren, Shirey and Timmy Jedrzejek. Gosek glided around a couple lap cars and as the Dunigan teammates did likewise, Wood was able to maneuver around Abold for second. Once clear of a few more cars, Wood put the pedal down and took Gosek off turn three for the lead on lap 95. A long tough day ended in victory for the Pelham, NH veteran with Gosek, Abold, Furlong and Bentley Warren coming in just behind. Jim Shirey, Timmy J, Perley, Dave Shullick Jr. and Howie Page were the top five.

Said Furlong after one exciting Hy-Miler race, “The car was good. It was a nice long race. Even though we finished poorly last night – the car was way too tight – we knew that that would be a good setup for tonight. We did the exact same setup for tonight and sure enough, it worked guys in front of us had a

better car. Maybe in another ten or fifteen laps I might of caught back up to Pat. But on restarts it took me four or five laps to get going. The Dunigan cars are always good and Gosek had a good race. But, hey, I’m happy. We had a slow start this season, but we’re coming on strong again.”

The ageless Bentley Warren was to the point, “I finished fifth. It’s better than last. It was a good night for the team. The car was working good. We still have a few little problems but we’re starting to catch up.”