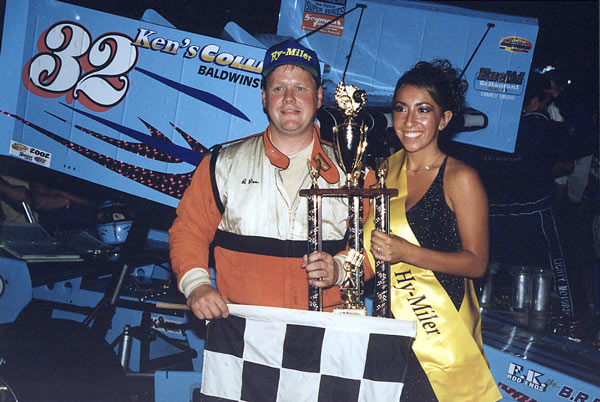 Sandusky, OH – The Soule Racing team, founded by Jim Soule, has fielded a race car in ISMA competition since the organization was formed 28 years ago. They sit atop the all-time ISMA point standings. They’ve been consistent and dedicated. But, as of Friday night, the collective team had only one previous feature, a Gary Allbritain win at Tioga(NY) Speedway more than ten years ago.

Ken Bell made it two on Friday night staving off the advances of Canadian Dave McKnight at every turn over three-quarters of the way. When Bell crossed the finish line a car length ahead of McKnight, a huge cheer erupted from the stands. This was a deserving $2400-win by a deserving team who’d paid their dues. Dan Soule, son of the team patriarch who passed away several years ago, savored the poignant moment.

Said Dan, a talented driver in his own right, “We’re happy. The guys have worked very hard and they deserved this. Ken’s done an excellent job all year. They are a great bunch of guys and the deserve more wins. I hope they get them. This is the first for the team since dad died. This one’s for him.”

Bell, who started fifth on the field, led all but the first lap. He definitely did not have it easy as he survived a rash of yellows and reds along the way. His smile was wide in victory lane when he said, “It was a tough race. I felt the 94 behind me the whole time. The car was pretty good. It felt good. I felt Dave a couple times and I saw him a couple times. I was waiting for him to come up on the outside once or twice, but I didn’t see him. Then he came underneath and I said ‘time to stay low’. The car was pretty neutral at first then it started to get a push to it. The nose wing got bent up and that might have contributed to it. It was getting tighter and tighter and I couldn’t turn it was quick.Everybody is tough here. They’re in a couple tenths and it’s hard to pass. But, my car was strong. It had been strong all day. Hopefully it will be strong tomorrow.”

2001 ISMA champ Dave McKnight knocked on Bell’s door for most of the race. During the last five laps, after a caution, he got extremely close, but Bell held him off looking for that elusive career-first. Said McKnight later, “It wasn’t bad. Second again. We’re getting closer. It was hard to pass out there tonight. The caution hurt us near the end. The car got better as the laps went on. I was able to get a lot more maneuverability The last caution with five to go just hurt me. I needed four of them to get the car back. Once I got it back I had a couple shots at Ken but it just wasn’t enough. Too late, that’s all. Tomorrow’s a 100. Another 60 tonight might have made a big difference tonight. But, we’re good for tomorrow. We’re tight and one piece for second. We’ve gained in our points battle. It was a good night. I’m happy for Kenny Bell.”

A thirty-three car field was pared down to 25 with a 12 car consi finding Lou Cicconi and Russ Wood just catching the last two qualifier spots as Jon Gambuti took the win. A lot of fast cars laid out back when the race began with John Henes and Jamie Letcher out front. And it began in a mess.

Yellow flew before one lap was complete and it took out Chris Perley’s 11 while sending several cars into the pits. Perley indicated later that the Shirey 16 had gotten crossed up with Perley diving low to avoid. But a pack of supers poured in, one clipping Perley’s front end. Scott Martel was also into the pits as was Shirey and Martel. All restarted except Perley.

The restart saw yet another yellow and the elimination of two strong cars in Howie Page and Joe Gosek. Page got loose coming out of turn two, sending his 18 down and unfortunately collecting Gosek’s 26. Both were hooked. The race finally shook off the anxiousness and got underway with Bell picking off Jamie Letcher for the lead on the backstretch. Dave McKnight almost immediately moved into second and the chase was on.

Bell was able to put a lot of distance on the pack out front until a lap 14 yellow closed the gap between his 32 and the blue Lichty team cars of McKnight and Brad Lichty. An Ohio contingent of Jon Henes, Denny Fisher and Pat Shullick ran behind Lichty with the venerable Bentley Warren trailing Shullick.

The yellow-red dropped on this circuit when the 16 of Jim Shirey climbed aboard the 72, driven by son Eric. Carefully extracting the 16 from the 72 took a few minutes, but the damage was not as bad as it could have been. Eric Shirey said later that a car seemed to have brushed the wall causing a checkup and the resulting accident. Both cars were hooked.

The green flew and the pressure was on Bell as McKnight was right there. Lichty, Pat Shullick, Joey Payne, Jamie Letcher and Lou Cicconi, up from the tail of the field, were the next contenders.

The lead duo began to catch up with slower cars and all eyes were on the Bell and McKnight cars. Would Bell be able to hold off the six-time feature winner in 2001? The answer was yes as they maneuvered around in traffic that wasn’t running all that slow either.

With five to go, the drama intensified when the yellow. then red, flew for a multi-car track block came in turn two. A sliding Timmy Jedrzejek brought the Timmons 27 around, collecting Jon Gambuti, Bentley Warren and Russ Wood in the action. Wood and Warren were basically avoidances, but Warren had to head pitside for some minor repairs. Timmons was able to do likewise .

It was a five lap drag race for Bell now as McKnight pressured the Pennellville, NY driver high and low. But it was Bell’s race to win and he took it. Bearing down on him as he took his first victory were McKnight, Lichty, Joey Payne, and Lou Cicconi. Dave Shullick Jr., Greg Furlong, Pat Shullick, Mike Ordway, and Russ Wood finished up the top ten.