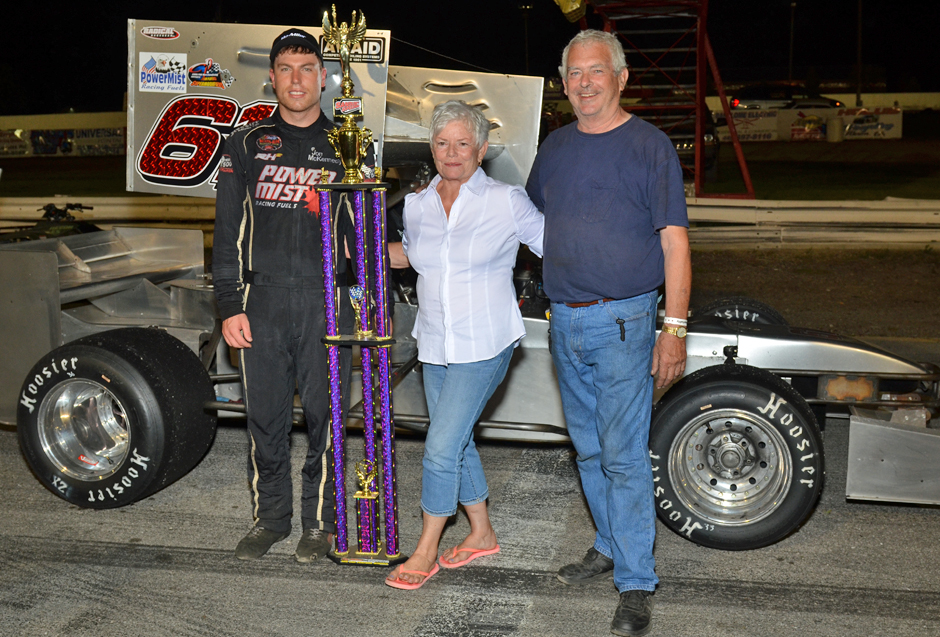 Sandusky, OH – Jon McKennedy became the seventh different ISMA winner this season when he came home with a first-ever Hy-Miler 100 win Saturday night. While Jon had not been in victory lane at this prestigious race which dates back 38 years, the car he was driving had been. Last season owners Clyde and Susan Booth stood in victory lane with Lou Cicconi who took his first ever Hy-Miler victory in the same car. For Chelmsford, Mass. driver McKennedy it was his seventh ISMA victory and the biggest to date. Jon acknowledged that fact in victory lane.

“I want to thank all the guys who make this possible especially Clyde and Susan Booth who gave me the opportunity drive this car. I want to thank my crew and every one who as helped me. I really appreciate it. The first few races this year have been a bit of a struggle for us. We showed a lot of speed but we seemed to have some little issues that would always bite us. Tonight everything worked out great. Earlier today we were struggling. Clyde took out his notebook and got things straightened out. Again I have to thank him and the crew.

“This is a great win and it’s cool to be a part of it. Tim had a good race going in front of me. Somewhere around lap 15 I made a good charge at him on one of the restarts. I felt I was going real hard and I slowed up the pace a little. Around halfway I started going and the car was good. I want to thank all the fans for coming out to see this.”

Kyle Edwards definitely had a great run to second place after starting eleventh on the field. Hailing from Tennessee, Edwards moved into second after a series of mechanical ills sent leader Tim Ice, second place runner Dave Shullick Jr. and Danny Shirey to exit the field. Edwards then chased eventual winner McKennedy for most of the second half of the race.

Said Kyle, “All in all it was a great weekend although toward the end there it kind of hurt us when it started to get loose the last part of the race.. But, I can’t say enough about that Level Performance motor. We have some serious power. Right now I’m happy with second. We’ll go out and drink a lot of beer and talk about it. I have to thank my dad, Mark, everybody who helps us out, especially Level Performance. Johnny Benson who fixed this race car – it was junk a couple years ago. It turns real nice now. We’re happy.”

Twelfth place starter Mike McVetta found himself on the podium for the second straight night as he pulled into victory lane behind McKennedy and Edwards. “I’ll tell you what, just call me Mr. Third place this weekend. Every start the car was great for about a lap or two and then it would go away for a lap or two. And the guys in front of me would run away. Then we’d get in a nice rhythm and would reel them in. Then a caution would come and negated all that. Hats off to the guys who do a great job.. my dad, Doug, Deano, Nick my wife, my mom. I have so many great sponsors. Perfection Fabricators, Adkins Glass, Euphoria Vapor, Fallsway Equipment, Cerni Trucks, Fourth Turn Crazies, Bank Manufacturing, Icandi, and a big thanks to all of you fans out there. You are the best.”

For the first time in a long time, looming weather was not a factor in the 38th running of the Hy-Miler as Tim Ice and Mike Lichty led the field to green. Unfortunately, for Lichty, his night would end quickly when on lap 5, he stopped in turn 3 and was pushed to the pits out of the action.

Ice was soon on cruise control a good distance away from the pack of some winged supermodifieds best, but only enjoyed his healthy lead until lap 15 when the yellow flew for Alison Cumens who was stopped in turn 2. She was straightened around and restarted at the tail of the field.

Once again the “Iceman” gained control while McKennedy, Shullick, Shirey, Jedrzejek, now Edwards, Seitz and McVetta were the top guns behind. And, soon Ice was sliding away from the second and third place combatants of McKennedy and Shullick.

Ice passed by the first 25 laps and was soon putting back-markers down a lap as he continued his domination out front.

The race finally slowed for the high-flying Ice on lap 39 when Ryan Coniam had stopped on he backstretch. Coniam was done for the night.

The McKennedy didn’t get much of an advantage on the restart of this lap as Ice once again took off leaving the 61 in his dust. Shullick, Shirey, Edwards and Jedrzejek were the next six as McVetta, Trent Stephens, Ben Seitz and Summers were top ten.

Ice looked to be the man to beat out there in front until suddenly on lap 43, he slowed and came to a halt. The front crank bolt had broken sending pulleys and belts off his motor. His impressive run expired with the unfortunate break.

Jon McKennedy found himself the new leader and he excepted the position graciously. Shullick and Edwards were hot on his tail and Shirey battled McVetta, Jedrzejek, Stephens and Eddie Witkum behind.

Lap 52 found Shirey puffing some smoke and bringing out the flag once again as he was pushed into the pits leaving a trail of tell-tale fluids on the track. At the same time, a strong running Dave Shullick suddenly exited the race also, leaving his large group of fans in disbelief.

Back underway it was McKennedy now with Edwards his nearest challengers while McVetta had taken over third, trailed by Timmy J, Trent Stephens and Witkum.

The laps clicked away quickly for Jon until on lap 64 yellow flew once again and this time refueling had to be allowed as the maximum fuel laps had been run.

McKennedy enjoyed a comfortable lead as the twenty-to-go mark came and went and then the ten lap to go signal came. Those trailing remained the same until with four laps remaining, Stephens brought out the final yellow when his 19 came around on the backstretch. He was able to restart, but lost out on a potential top five finish.

On this restart, with four to go, McVetta tried in vain to get by Edwards as Witkum had moved up to challenge the 22.

The checkered came out shortly thereafter for McKennedy with Edwards, McVetta, Witkum and Jedrzejek the top five.

For Witkum it was his best finish to date. “It was a typical Sandusky. It was hard. We didn’t qualify which didn’t work out too well but we knew we had a good car. We knew it would race good. Maybe if we had qualified it would have been a little bit better than fourth. We started fifteen and worked up to fourth. We’re happy. We haven’t had a fourth all year. I want to thank my car owners Pam and Lee for sticking with it through the ups and downs of the past few days. Sandusky is a fun place and hopefully we can keep the car rolling and finish a little bit better than fourth. Thanks also to Harrington Paving, Vinal Excavating, and Baldwin Crane… they help me get out of work on time. Car was good on the most part. We were able to get a bunch of guys on the outside. It’s hard to do here. The competition is tight right now. Everybody is running equally. We were fortunate to be fourth.”

Timmy J was pleased with the fifth place. “Congratulations to Jon and Clyde. They were the class of the field out there. There was a lot of cars dropping out which helped out our cause quite a bit, but you know it’s Hy-Miler and 100 laps. That’s pretty standard in this race. Howie Lane and the guys are giving me a car that preforms and we’re finishing races and another top five. Every week I learn with these guys and we’re jelling a little better. I’m looking forward to the New England swing.”