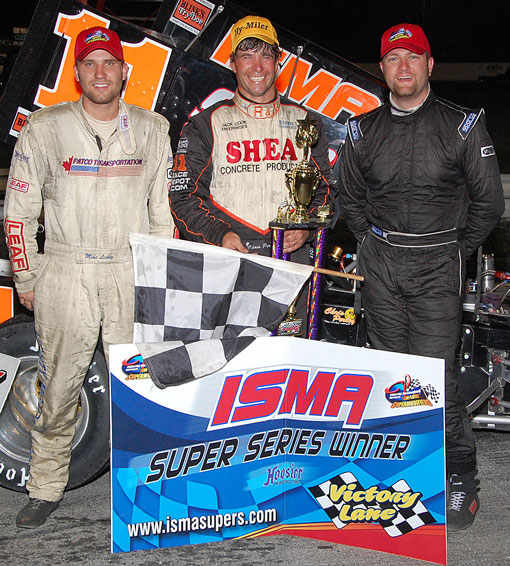 Sandusky OH – No supermodified driver had ever won four-straight Sandusky Hy-Miler 100s going into the 32nd running of the prestigious event Saturday night. Chris Perley now had the chance but also had his doubts. A sixth place finish in Friday night’s Fast 40, made him more uncertain that he could be the first 4-time consecutive winner. He wasn’t the fastest in time trials Saturday. He finished second in his heat. The Vic Miller crew set to work to make the car right. It was about halfway into the race that Perley knew he had a chance. Later that night he stood in victory lane with his fourth Hy-Miler trophy, the doubts erased. The Rowley, Mass. driver had received a call on Friday that his maternal grandmother had passed away in Floridaafter a bout with cancer. He chose to dedicate his record-breaking win to his “Nana.”

Said Perley in victory lane, “This is amazing. We were a little off yesterday. We worked on it today and made some changes. The crew is pretty sharp. I didn’t think we had the car tonight. I didn’t want to get down and disappoint the crew. By halfway I knew we had a pretty good car to win. It’s just unbelievable. It shows how good this crew is. I was happy to put on a show for the fans. It was kind of drawn out with the reds but it was a blast. It was fun partying. This place is great. This place is my favorite track. I would never have believed yesterday that I would have been here today.”

The race became a battle to the end between Perley and fast time trialer Dave Shullick Jr. Shoe II had taken the race lead on lap 49 from Tim Ice, and built up a strong lead but Perley gradually caught up and took the lead on lap 61 when he had the right opportunity to catch the high-flying Ohio driver. Perley described the winning pass. “I was running behind him on a restart and I think he got tight and couldn’t quite gas it. I popped to the outside and I think I got him then. I figured I wouldn’t be able to get him on an open track when he was running hard.”

Shullick, who has suffered heartbreak in this race in the past, was determined to finish this one, hopefully in first. Not only was he trying to fight for the lead, he had heavy pressure from the third place man, Mike Lichty “We were really tight off the corner and I was playing the throttle game off. I’d catch Chris getting in, reeling him in in the center and then coming off on the restart when he got by me, I just couldn’t get on the gas. But it was a good race overall. I saw Lichty a couple times on the outside and inside. I just had to fight him off. I wasn’t going to let him by me. I knew he was coming and I knew he’d be there. It was just a good race. Two second-place finishes in two nights is great. “

Lichty, who had broken a torque in his heat and did not make the consi, started the race in via ISMA option in 25th. He made a spectacular effort to get to the front, moving by Russ Wood for third on a lap 63 restart. He was able to show a wheel to Shullick several times before time ran out. Once again he came up just short of that first ISMA win.

“After the red flag the tires just wouldn’t come in,” said the Canadian driver. “Prior to the red I thought we had a really good race car. And, I thought we would have had something for DJ and Perley. I don’t know the deal is with the tires. This is our third set. I don’t know what Hoosier is doing, but I’m disappointed in the quality of the tire. We’ve had issues at Cayuga, Oswego and last night and tonight here. That’s four batches. All in all it was a good run. I want to thank everyone on the crew. We’ve got a lot of important people here – especially the crowd – thanks for sticking around through this long race. If it weren’t for you guys we wouldn’t be here.”

The 32nd Hy-Miler 100 was filled with action and drama. The severe thunderstorms forecasted for the day stayed away and allowed the race to go on as planned. Ohio’s Tim Ice, trailed by New Hampshire rookie Jeff Locke, led the 26-car field from the start. The race was just sorting out when the first of several reds stopped the race. On lap 12, Mark Sammut blew the rear end on the 78, leaving a trail of fluid catching up a slew of cars in the first turn, including leaders Ice and Locke. Several cars were hooked including Jon Henes and Sammut.

After the massive cleanup, Ice and Locke restarted in their original spots as it was deemed they were not involved directly in the caution; stopping only because the track was blocked. Ice shot out to the lead trailed by Locke, Russ Wood, Bobby Magner, Trent Stephens and Lou Cicconi. Locke was to fly the next yellow with a spin on lap 19. He left his second place spot for the rear.

A long green spell saw Ice out front, but not shaking his nearest competitor Russ Wood by any means. Wood, a four-time Hy-Miler winner, had lost the motor on his 29 on Friday, jumping behind the Eric Lewis 28 Saturday. Wood had a battle behind him ensuing between Dave Shullick Jr. and Chris Perley. Shullick was a man on the move and he was into third by lap 31 with Perley tucked behind. Perley said, “I followed him up through there, kind of playing cat and mouse. I said to an interviewer earlier that it was going to be a flat out 100-lapper and it certainly turned out that way.”

Ice was able to move around some slower cars while Wood, Shullick and Perley provided an action-packed fight for second. Magner, Trent Stephens, Lou Cicconi and now Mike Lichty were a slight distance behind just past the lap 40 mark. Shullick didn’t waste any time moving into second by Wood on lap 44. Several laps later, he put the Booth 61 into the lead. Perley moved into third, still keeping Shoe II in sight. Perley moved into second on lap 52. The battle of the two fastest time trialers was on.

Shullick knew the Rocket was there and he was able to put some lap cars in between for some cushion, but Perley would catch up.

On lap 61, the yellow flew for Friday night’s winner Randy Burch and Perley now would have a clean shot at the 61. Wood, Lichty, Ice, Trent Stephens, Cicconi, Schultz and Rob Summers were all within range.

It was on this restart that Perley was ready to make his move when Shullick “got tight and couldn’t quite gas it.” Perley was the leader on lap 62. What might have been a 40 lap lead battle to the end had trouble materializing. Things went downhill for many from here on in. On lap 63 Danny Lane flew the yellow for a spin. The field bunched. On lap 70, Bobby Magner brought out the yellow for a spin. The field bunched. The driver taking the advantage now was Lichty who was able to move into third after the first spin.

Total mayhem broke out on the restart of lap 70 when Wood and Cicconi tried to maneuver around Jeff Holbrook’s lapped 35 just ahead of them off turn four. Holbrook got up on the fence in the front straight with several cars including Cicconi, Tim Ice, Stephens and Jeff Abold all ending up against the inner rail. The red flew and the ambulance crew checked out Holbrook after the hard hit. He was okay. Ice was done, as was Cicconi. Stephens was able to rejoin the field after repairs during the lengthy cleanup.

Perley pulled away from Shullick slightly on the restart, but Shullick was still able to keep up. Lichty, Wood, Schulz and Timmy Jedrzejek were now the fourth through sixth players.

Lap 79 saw Friday night’s winner Randy Burch pulling the flag and joining others in the pits to decrease the car count on the track to 17.

With 20 to go, it looked again like a clear shot for Perley to claim his fourth straight as green flag laps allowed him to get some lap car cushion. With 10 to go, the end appeared to be in sight. But one lap later, Trent Stephens, in an attempt to move by Ben Seitz, may have brushed slightly with the 88, sending the 19 off the first turn so far that he cleared the tire barrier and hit the soybean fields. Stephens was not injured but red was dropped in order for the track crew to extricate the Stout 19 from the field.

Finally, after two hours of waiting, Chris Perley was closing in on Hy-Miler history on this final restart. With two to go, Shoe II made one last valiant attempt at taking his first Hy-Miler win, but was denied and actually found himself fighting off the Lichty 84 in those last laps. Russ Wood and Charlie Schultz were still running a competitive top five at the checkered.

Wood in his borrowed ride, commented, “Another Hy-Miler. I was happy with our night. I had gotten into a car I hadn’t driven before and to come in fourth against those guys – I think is pretty good. We were a little tight. I’d like to thank Eric for letting me run the car. We were there. The heat was good. It’s an excellent car. I think we did good for the time we had today. We definitely could have made it better with some more time.”

Schultz, after starting 11th, was happy just to finish. “It was a hard earned fifth. We definitely didn’t have the car for a fifth place tonight. We would have been lucky to be in the top eight. We just missed on the setup for the long race. The car was decent on the long run there, but we kept getting cautions and red flags. It turned into more of an endurance race. Unfortunately coming down for the checkered flag I either dropped a valve or broke a rocker arm or something. So we have a lot of work to do between the two cars before next week.”