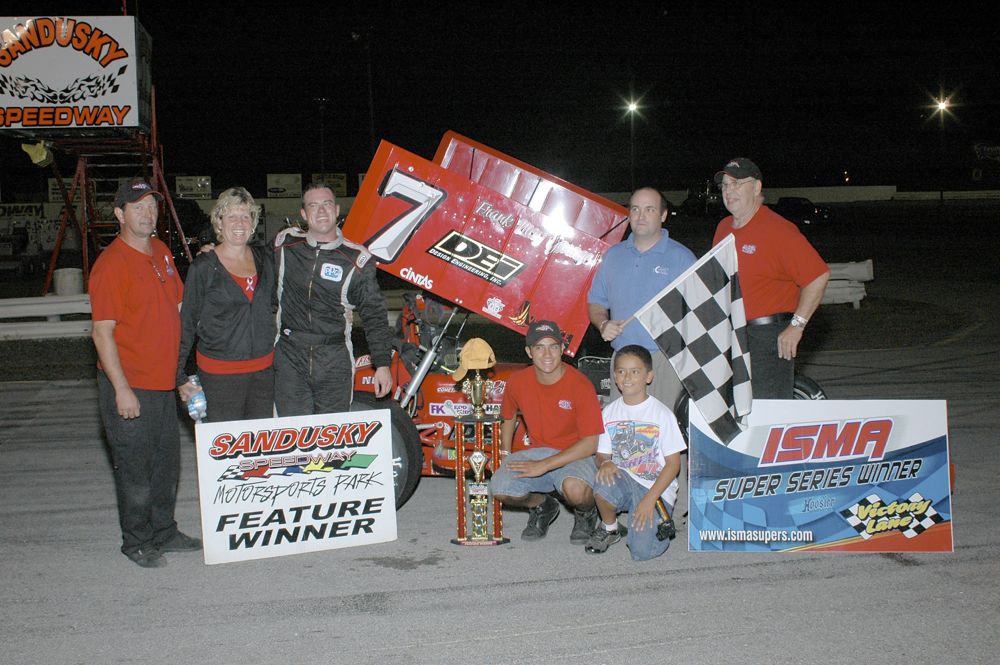 Sandusky, OH – Charlie Schultz was certainly not a stranger to victory lane at Sandusky Speedway having won several times before in MSA action. But, Friday night’s 40-lap victory was his first victory in ISMA competition in his successful career. Schultz acquired the lead just after a lap 11 incident, which saw leader Dave Shullick Jr., lose a wheel nut on the 61, creating a massive pileup in turn three. Schultz was able to build a healthy lead, survive several other yellows, one of which was a near miss for the May Motorsports 7 with just 10 laps to go.

Schultz exclaimed in victory lane, “This is awesome. I want to thank the entire crew and everyone who came out here tonight. I hope this is a preview of things to come tomorrow night. I want to thank Hempel Int’l Transport, Frank May Garage, DEI, Cintas, Bell Helmet, Burke’s HomeCenter, Fisher Performance– everybody in this whole deal. Everybody puts in 100 percent.

“This first ISMA win means a whole lot. It’s really special. You have guys here who are some of the best supermodified racers in the country. We’ve won races in MSA but this means we’ve just stepped up our program enough to win some ISMA shows too. There were guys out there tonight who have won a lot of ISMA races and hopefully this is a prelude for tomorrow – that we can run strong and be around at the end of 100 laps.”

Taking over second on lap 27, Mike Lichty was a distant challenger to Schultz. Said the young Canadian who narrowly missed winning both legs of the 2006 Hy-Miler weekend, “We were close tonight. Charlie drove away from us but we were definitely close. We just missed the setup a bit tonight. But we have our baseline for tomorrow. I’ve got three wins here in the MSA racing but we’re still looking for that first ISMA win. We’ve run here good in the past. Tonight’s pace was real good. Everyone ran strong. But tomorrow is going to be a little different. Everybody will be more cautious in the first 40 laps or so and then step it up for the next part. We’ll see what happens.”

Four-time Hy-Miler winner Russ Wood looked to be back in form as he battled by his teammate Dave Trytek to take third with five laps to go. “We have to be happy with this finish in the second race out in a brand new car, said Wood. “It’s a good tune up for tomorrow’s race. These guys are running hard. We had to work pretty hard for a third. My car was great but obviously a couple guys were a little better. This track has been good to us in the past. It must like my driving style. I like this track. The car is really good and we’ll work on tonight’s setup and try to make it better for the long run tomorrow. Congratulations to Charlie and the team for a fine win.”

Twenty-six supers hit the track for the traditional tune up for the Hy-Miler Nationals and it was Dave Shullick Jr. taking charge from the start in the Booth 61. A quick yellow on lap six slowed Shullick when the 71 of Kyle Edwards and the 25 of Bob Bond brushed. Another stoppage came on lap 10 when Randy Burch blew a motor taking Howard Page and Bob Dawson with him. Dave McKnight also was towed away here in an unrelated incident.

Shullick Jr. pulled away on the restart, but unfortunately he would be the cause of the next stoppage before a circuit was complete. The red flew for this one, which took out many of the top runners along with the 61. Shullick described the incident, “The left rear wheel nut came off. I went down the back straightaway like sideways – left right, left right. When I finally caught it I moved down but it was too late. I had already caused a big wreck.”

Perley, the defending race champion, quipped later while talking to Romanoski about what had happened, “: I saw the nut come off earlier and then I forgot about it. Then a lap later it all happened in turn three. I yelled at Kevin Jaycox afterwards and told him that he has to put a no parking sign in turn three. There just isn’t enough space for that amount of cars over there.”

The big wreck took out or affected Chris Perley, Shullick’s dad Dave Sr., driving the Stout 49, Shullick’s teammate, Moe Lilje, Mark Sammut, Jeffrey Abold, and Timmy Jedrzejek. Lilje and Jedrzejek were able to return to the fray, but Lilje was later called back into the pits by his crew and did not return.

Out in front after the lengthy cleanup was Baldwinsville, NY driver Dave Trytek in one of the three Holbrook cars in the field. Trytek was only able to hold off Charlie Schultz for two laps before the 7 shot by for the point.

Lap 15 saw yet about yellow for the afore mentioned Holbrook whose 35 spun after losing a wheel center. Jeff was on the hook and out of the race.

Schultz was riding high now after this restart as Trytek, Lichty and Wood put on a show right behind just a few car lengths ahead of Vern Romanoski and Joe Gosek who fought for fifth. Lichty grabbed second from Trytek on lap 26 and tried to close on Schultz to no avail.

A wheel to wheel battle developed between Russ Wood and Dave Trytek for third. A battle, which Wood, won eventually. Said Dave later in the Holbrook pit, after a fourth place finish. ” It was a good run considering the fact that in hot laps the car was awful. The crew made it better for the heat and in the feature it was really good. It was still a little tight but it was a strong car. I felt a little bad battling Russ. I didn’t realize it was him on the outside there. But I was fighting anybody who was trying to get by.”

The final race caution could have easily taken Schultz’ win away when Gene Lee Gibson slowed to pit causing a spin by Tim Ice in Schultz’ team car 77 and a near miss by the 7 who was coming up to pass. “It was pretty close in that caution. I had to go three-wide there to miss it.”

Schultz, Lichty and Wood ran under the checkers some distance away from Trytek and Romanoski for the top five. For the Maine driver of the bright green 5, it was great race.

“We had a lot of help today from Brad Lichty and Vic Miller. I’ve had a fuel problem for a while apparently. We kept thinking we were getting it fixed every race and we weren’t. With their help and the changes done to it, the car ran well. We almost had fourth at the line. On one of the restarts we had a little bit of stuff on my right front tire and I couldn’t get it off. I shoved up and a couple guys got by. But we stayed steady and kept clicking off the laps. We are very, very happy with our finish. It’s our best finish to date. And, I do feel bad about Chris Perley and all the guys getting wrecked. But we had a great finish. My crew, my wife – everybody’s happy. Thanks to everybody for their moral support. ISMA gives me so much support. We’re looking forward to tomorrow. Our hearts go our tonight to the family of Terry Gibson.”

Joe Gosek, Jon Henes, Timmy Jedrzejek, Tim Ice and Bobby Bond completed the top ten, the only cars remaining on the track in the attrition-filled prelude to the 100-lap Hy-Miler on Saturday.

Note: Gene Lee Gibson ran as the 00 as a tribute to his late brother Terry and Joe Gosek swapped numbers running the 0 of one of his former heroes, Todd Gibson.

Denny Fisher (81) and Larry Lehnert (92) both out due to motor problems.