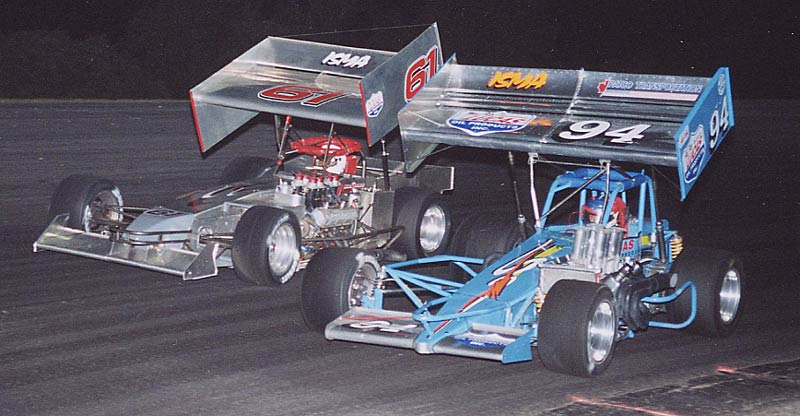 Sandusky, OH – Mike Ordway started on the pole for the Friday night preliminary to the Sandusky Hy-Miler weekend and that’s just where he finished the 40-lap ISMA event. Mike led the way from the beginning and by race end, had lapped a good number of the 35-car starting field. Only one caution slowed the pace on lap 5 when outside pole sitter Jamie Letcher had the rear end go on his car. The restart of that lap was about, as close as anyone got to the Clyde Booth owned 61 as Ordway dominated the remainder of the event to take home the precursor to Saturday night’s 100 lap Hy-Miler Nationals that this year carries a $10,000 payday.

Said Ordway after the event, “I had a good start tonight. I started up front and just stayed there. The car was good all night long. The car is awesome – it’s unreal. It’s running really good so we have a good chance for tomorrow night I hope. I’ve been here on Friday night before, but I haven’t ever won a Hy-Miler. That’s the one I want.”

Spartanburg, SC’s A.J. Davis, a first year supermodified runner, was a distant second to the veteran New Hampshire driver. Said the newcomer to the Hy-Miler wars, “ I don’t get to run with these guys much so it’s nice to come up here and have a good show as this is sort of my home track. Kasper Auto Group, Ott’s Auto Body, Wendy’s, Steve Stout – all the guys on the team. They do a great job for me and it makes my job easy. I show up on the weekend and drive for them. I’m really glad we could make it all worthwhile. I had a good car tonight and that made me happy. The 61 car did a good job tonight. Hopefully we can come back tomorrow night and do it all again.”

Finishing third in yet another new ride was Joe Gosek, the defending, Hy-Miler champion. Gosek in his first time out in the Bodnar chassied 77 owned by Dave May, started fifth and finished third. Said 3-time Hy-Miler champion, “This is a good opportunity to drive with these guys. I’d like to try and sort this thing out a little bit. I haven’t run it that much. We made some changes today but it was kind of tough with the new pavement and all that. I started fifth and passed a couple. I finished third with a couple guys hounding on me. Tomorrow night’s a whole different story with the longer race. We have to make the car a little bit better for tomorrow.”

Mike Ordway pulled easily away from Davis, Letcher, Joe Gosek and Lee Boss moments after the green dropped before a huge Sandusky crowd. But, as aforementioned, Letcher brought out the one and only yellow on lap 5 and was into the pits. Scott Martel also parked his 14 at this juncture.

Ordway stormed away on the restart and left the rest of the field to tend for themselves. Davis and Joe Gosek began a battle for second as Denny Fisher, Lee Boss, Pat Shullick and Jim Shirey chased.

Starting deeper in the field were the current top two contenders for the ISMA points lead – Wood and Perley moved up through the pack to fourth and fifth place respectively. But neither could mount a challenge to anyone in front of them as the race moved quickly by.

With ten to go, Ordway was in control, picking off car after car. With one to go, Mike had half a dozen cars between his 61 and the 19 of Davis in second. Gosek held onto third behind Davis while Perley had one more pass in him and that was of Wood on the last lap. But, it was too little too late.

Said Perley coming off a Cayuga win two weeks ago, “ I needed to catch them about three laps before I did. When I finally caught Russ it was right then that I went to the outside and that was the last lap my tire had on it. When I tucked it outside of him, I couldn’t go around the other two and I was loose on the bottom. We had a good car. But, I don’t know what to do for tomorrow. Tonight we had a forty lap car and tomorrow I guarantee you we’ll have a thirty lap car.”

Unofficially, Perley’s move put him just three points behind Wood for the ISMA point lead going into the Hy-Miler Nationals on Saturday.

Wood commented on his fifth place by saying, “We had a battle with Chris there at the end. The car started getting loose. I had to run real hard. It was a fast pace and we were kind of neutral when we started and we kind of did the right rear in and blistered the heck out of it. So, I was loose at the end, just hanging on and Chris got me.”