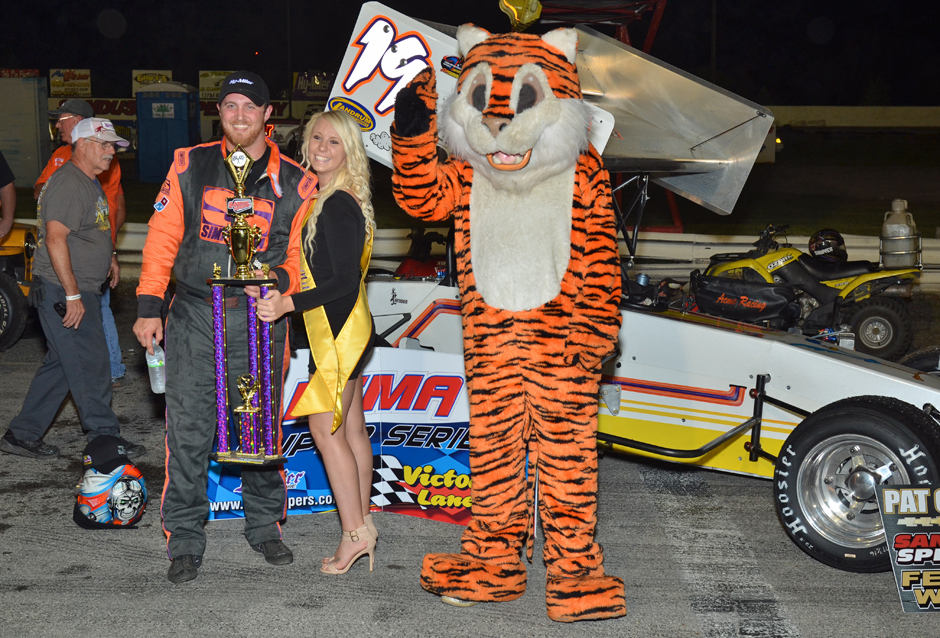 Sandusky, Ohio – Ravenna, Ohio’s Trent Stephens took command of the Friday Night Fast Forty at Sandusky Speedway from the drop of the green and never looked back.  And, for a while, that was perhaps a good thing as several competitors like Dan Bowes, Jeff Locke, and Ben Seitz were within striking distance in the early going. But quickly Stephens, looking for his first ISMA win, pulled away from the pack, leaving some distance between his Stout 19 and the Locke 37. Only one yellow past the midway mark, bunched up the field, but Trent put the 19 out front and kept it there. Stephens breathed a sigh of relief standing in victory lane, after what has been a rather difficult season to date.

He explained in his post race interview with large throng of well wishes surrounding him. “We’ve been having a lot of issues with this car. We finally changed some more things before this race and it helped it out a little bit. I think we still have areas to improve on but it’s definitely a lot better than it was. I can’t thank my guys enough. They built this car for me because I wanted it. They went through a lot to get it done. It’s been a slow go so far but I guess we got the monkey off out back. Hopefully we’ll keep going from here.

Was he worried about challengers? “I couldn’t hear anyone behind me. I knew it was a 40 lap race so I didn’t really pace myself. Actually we lost our brakes so we are going to have to figure out how to fix that because if it went bye, bye in 40 laps, it will definitely not last for 100. But, it’s obviously a faster car now for sure.  I have to thank Kasper Auto Group, Landrum Spring, Shaffer’s Oil, Real Wheel, all my guys, Steve, Rich, my entire crew and my family. It’s definitely been a rough year.”

New Hampshire’s Jeff Locke kept chase, but wasn’t able to get close enough in the quick running sprint. “We were just pushing a little bit too much. We couldn’t get back to the front like we wanted to Congratulations to Trent and the whole team. They have been struggling with that car. It’s good to see them with a win. They are a great group of guys. We’ll definitely use a lot of this race and build on it for tomorrow. I’d like to thank Locke Crane and Shawmut Equipment who takes care of all of our tires. It’s a big help. Thanks to my father for getting the car here for us to work on these things. I’m just privileged to drive these things. It’s a lot of fun”

Moving up from an eighth place starting spot was another recent new ISMA winner, Lorain County victor Mike McVetta. He had to track down and get by defending Fast Friday winner Ben Seitz, Danny Bowes, Jon McKennedy and Rob Summers before he moved into a podium spot behind Locke and Stephens. The young NASA engineer commented on his third place. “With this group it’s so hard to get to the front. Hats off to Trent for coming home with the win – their first ever in ISMA. I can’t thank my mom, dad, my wife, Doug, Deano, Nick – all the guys who help us, all our sponsors Perfection Fabricators, Euphoria Vapors, Fourth Turn Crazies, Adkins Glass, Icandi Graphics, Fallsway Equipment, Cerni Trucks and Banks Manufacturing.  I think we got a good piece. I think we wore the tires off coming through but it’s really good on the high side and that’s what important here.”

The 27-car starting Fast Friday field was led to green by Stephens and Dan Bowes but a trip off the track by Jim Paller before one circuit, caused an immediate slowdown. Paller was able to make it back into the race, but a broken power steering line found Alison Cumens stopping on the front stretch and eventually exiting the race.

Back underway, Stephens grabbed the lead trailed by Bowes, Locke, Seitz, McVetta, McKennedy and Rich Witkum. Dave McKnight, who had experienced a ride of turn three and a flip in the 70, had gotten back together in time for the race, only got four laps in before he also left the fray with no yellow dropped.

Out front Stephens was gaining momentum as he pulled away from the pack and he began to move around slower cars, adding some real estate to his lead. By the midway mark there were several lap cars between him and Locke in second. Seitz, Bowes, McVetta and McKennedy were still in the mix with Witkum, Otto Sitterly, Dave Shullick and Rob Summers in a tight line behind.

Yellow flew on lap 27 for debris on the backstretch to give Locke and the others a fighting chance, but Stephens was on a mission and never skipped a beat as he pulled away on the green. McVetta utilized the restart to grab third from Seitz with McKennedy parked on the 17’s back door.

The remaining 13 laps flew by in no time and Trent Stephens was home free with his first-career ISMA win. Locke and McVetta stood on the podium with Stephens with Seitz and McKennedy rounding out the top five.

Said Seitz after the race,  “We had a good run, but it got loose toward the end. We brought it home in one piece and we’ll fight for the 100 lapper tomorrow. The car was feeling better tonight. Hopefully we can come back and run real strong tomorrow.”

McKennedy was not displeased with his finish. “It was a decent run for us. We started fifth and ended fifth. We were off a little bit. Today we made a lot of improvements on the car. We time trialed up front and raced real decent. I think we have something pretty good to work with for tomorrow.”

70 McKnight wreck in time trials. Mike Lichty 84, blown motor in practice. Both were able to make the feature after repairs.