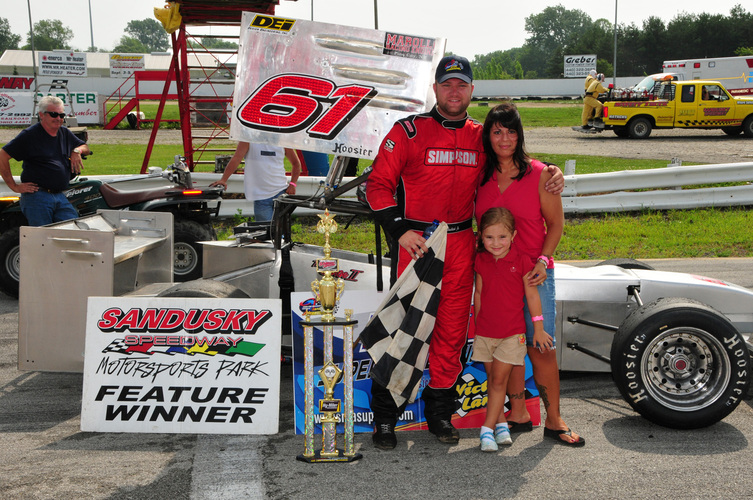 Sandusky, OH – Despite the fact that it was 10:30 Saturday morning at Sandusky Speedway,  Dave Shullick Jr. proved he was was wide-awake and ready to go racing. Shullick, starting fourth on the grid, moved by race leader Rob Summers on a lap 5 restart and proverbially never looked back. The 40-lap Hy-Miler ISMA preliminary had been rained out on Friday night and was begun at 10:30 am. It was the fifth different winner and team at the fifth different racetrack to date this ISMA season. Shullick, who exited the last race with mechanical ills, was more than pleased with Booth-61 ride.

“It was a good run, said Shullick Jr. “I wasn’t holding too much back just because I didn’t know where the guys were behind me. I got some hand signals up there in turn one on the cautions and they indicted I had a good distance on them. But, I didn’t really want to let up too much. I feel good about the run. There are a few things we have to work on. The car was tight and I dialed some brake around. I was able to take some push out. I got a good restart on Robbie there and after that I think I found it and the car was real good to the finish. I think if we were clear of traffic, Robbie would have been tough.

“Tonight is a different race. Obviously it’s a long race and it’s at night.  We didn’t really get loose in the 40-lapper so I think we have a pretty good setup for tonight. The track is typically looser during the day. We’ve raced a few Cavalcades during the day here. I think we’ll be good tonight. I like the Hy-Miler. You don’t have to go all out but you go at a pretty good clip. We only have to make a few minor adjustments for tonight.”

Rob Summers took the Holbrook 35 to a second although traffic had prevented him from getting too close at the end. He directed his appreciation to his team, first and foremost, “I’d like to thank Jeff Holbrook and the whole JWJ team – Brian Allegresso, Doc, Mike – everybody just did a heck of a job. I think we’ll be all right in the 100-lapper. If I keep it in one piece I should be okay. We’ll just have to make a few changes for the night race.  I’d like to thank the fans for coming out this morning after last night’s monsoons!”

Ohio hotshoe Charlie Schultz was on Summers’ bumper to the end and indicated he was pleased with his car as he looked toward the night’s Hy-Miler.

“I think the car was pretty good.  I think we had more of a long race setup under it for today just to try it. The car came in about half way through the race and the fuel load started coming off the car. It was just a little on the too tight side.  The guys who started up front have a little advantage but coming from back farther back, I think we did pretty good. Tim ended up fifth and me third. I’m pretty happy. The track wasn’t too bad. It actually picked up a lot of grip, especially during the feature. The more we ran, the more rubber was laid down. Should be pretty good show tonight if the rain holds out.”

It took a couple extra laps to get the feature started as Danny Lane flew the yellow for a little spin off turn four and then Lou Cicconi drove the Stout 49 off and on the track to bring out the flag quickly after lap 1.

Shullick Jr. wasted no time in making his move around Summers which started in turn one and finished up in turn 4. Shullick was the leader as the 6th lap was complete.

As Shullick was acquiring a lap-car cushion, things behind were fast and furious between Summers, Belfiore, Lichty, Schultz, Sammut, Ice, Gibson, Dawson and Wood.

Yellow for the 8 of Dave Shullick Sr., flew on lap 23 when the car slid into the inner guardrail out back landing in a massive puddle dampening Shoe’s chance at restarting.

After his dad was towed from the watery mess, Shullick Jr. continued on out front with at least one lap car in between a very racy bunch.

With ten laps to go, Shullick and Summers had separated themselves from that pack of Belfiore, Schultz, Lichty, Ice, Dawson, Sammut and Wood.

On lap 33, third place runner Belfiore was apparently fading as Schultz and Lichty and then Ice came by the slowing 98. Justin, coming off a great race at Airborne Speedway, said after the Fast 40, I had a good car. I figured we’d finish in the top 3. Then I developed a fuel problem…started running out around lap 30. We were lucky to make it to the finish.”

The racing continued with no flags, as Justin drifted backwards but was able to maintain speed. As the checkered flew, Shullick Jr. had a healthy lead over Summers, Schultz, Lichty and Ice.

Lichty, the current ISMA point leader, remarked afterwards on his fourth place, “We’ll take it I guess. We never have speed here during the day at Sandusky. That’s one of our biggest flaws when we come to this racetrack especially when we have 100 degrees during the day. We are usually four or five tenths off. We started 6th and finished 4th. We probably had a fifth place car but Ordway and Belfiore dropped out. We’ll take it. The big race – the Hy-Miler is tonight and this car seems to shine at night.”

Ice indicated that he had a time figuring out the track. “The race track is so different on the ends and I got really loose there in the groove. Finally Dawson got by me. I moved up and got to the outside and I got a better grip. I got by Gene too and I kind of run them down a little bit but you had to search around. The track was not very good. I think the weather and the time of day played a role. There was a little bit of water coming out. It’s sure to get better now if we don’t get any more rain. We’re satisfied with fifth for now. We just have to make sure we don’t do that in the next feature.

The racing at Sandusky continues later Saturday afternoon with the qualifying for the 33rd annual Sandusky ISMA Hy-Miler 100 starting around 4 pm.

Larry Lehnert and Rich Reed (dns due to mechanical difficulties)