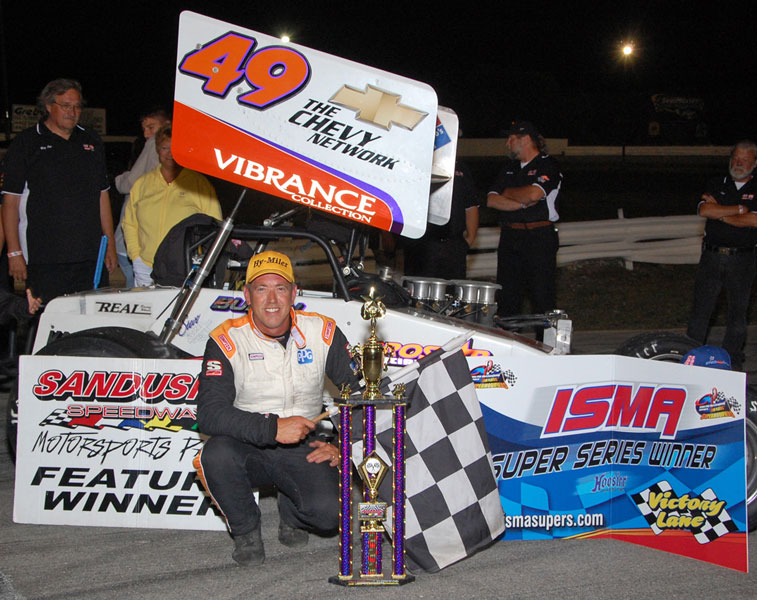 Sandusky, OH – History repeated itself Friday night at Sandusky Speedway when Randy Burch took home his first-ever ISMA feature win repeating what Charlie Schultz had done in 2008. Burch, who started 4th in the 27-car stellar field of supermodifieds, grabbed the lead on lap 9 and took the Steve Stout 49 home to victory 31 laps later. Burch pulled away from the field but his nearest challenger, Dave Shullick Jr., slowly reeled in the leader toward race end with lap traffic playing a critical role. Schultz got into the mix to make things very interesting. At the end the top 3 hailed from the “Buckeye” State much to the delight of the record-breaking crowd on hand who stayed despite the past-midnight start.

Said Burch, surrounded by the large Stout crew in victory lane, “I figured Shullick would be coming. I didn’t know how close he was. I figured there were a couple other guys out there when I ran into lap traffic. And, then I realized they weren’t there. Tomorrow’s the big one. And, tonight I thought I might take it easy, but with 40 laps you just have to go. With the guys out there tonight, it was a real honor to win. These guys out here tonight are real great. It’s great that the fans stayed. It was a long night. Hopefully, we get some good weather tomorrow and get the race in. This is a great night for our team.

Dave Shullick Jr., who worked his way up from a tenth starting spot, said of his run, “I think we could have gotten by if there had been about ten more laps. He was using up the groove. We only had a few more laps when we got there. It was going to be a good race. It looked like he was backed up a little bit. Our car wasn’t perfect tonight and we have a lot to build on. We’re looking forward to 100. I have no doubt this car will make it. It’s been phenomenal. As I said I think we have the car to beat for 100 laps tomorrow.”

“Charging” Charlie Schultz, fresh off his $10,000 victory at Oswego’s King of Wings, came on like a house of fire from his eleventh starting spot, to be what looked like the fastest car on the track, but fell short of reaching the top two until late in the quick event. He was almost as happy for the new ISMA winner as anyone. He had been there. “It means a lot to win a show here at Sandusky, especially on Hy-Miler weekend. We came up a little short but I think we have a good car for tomorrow. Maybe if there had been ten more laps there might have been a different order tonight. It was good. I sure hope this show was worth waiting around for. We had a good car for a long run. I think we’ll be in good shape for the 100-lapper. We just came on a little late there at the end. I think it would have been interesting if it had gone green for another ten laps. I can’t thank the fans enough, Dave and Lori May, my mom, my dad, my girlfriend Sarah… all the guys who help me on the crew. This is a great team.”

Brandon Bellinger and Robbie Summers, in his first outing in a newly acquired Lane 97 super, led the 27-car field to the green, but only one circuit was in the books before mayhem broke out and the red was dropped. Trent Stephens and Bobby Haynes Jr. brushed going into one and Stephens went over the bank. The cars behind scattered trying to avoid with at least nine cars going to the rear after the track was cleared. Lou Cicconi and Bobby Dawson were no shows at the restart.

On the green Summers pulled his Jim Bodnar designed (the former Petro 33) out front with Randy Burch grabbing second from Bellinger. The 97 and 49 pulled away to battle as Tim Ice, Dave Shullick Jr., Dave McKnight, Charlie Schulz, Mike Lichty and Chris Perley looked for room to move in the short event.

On lap 8, Burch pulled alongside Summers and was the leader on lap 9. Two laps later, things slowed again as Rich Reid and Stephens collided on the front straight. Both were hooked. A quick yellow fell for Jeff Locke on this restart. He exited the race.

With the hungry pack bunched, Burch had Summers, Shullick Jr. and Schultz breathing down his neck. He didn’t waste anytime in taking off to leave them to fight each other. At least nine cars put on a show behind.

Positions changed behind the leader Burch on every lap. By lap 25 Shoe II put the 61 by Summers with Charlie Schultz following by a few laps later. Summers still was able to fend off Ice, Perley, McKnight and the still racy bunch behind.

With no further stops, Burch was weaving in and out of lap cars but it was also evident that Shullick Jr. was reeling him in. Also evident was the fact that Schultz was possibly faster than the two cars in front of him. But time was running out.

Shullick Jr. was able to pull within a car’s length of Burch’s 49, but the checkered and his first ISMA win, was in sight for the Middleburg Heights, Ohio driver. Shullick crossed in second with Schultz close behind. A lap car sat between the front three and Summers and Ice for the top five.

Summers was more than pleased with his new mount’s performance.” I have to thank Howie and Debbie Lane for getting this car. I think we picked up this car at the beginning of last week and to come here and finish fourth for us was like a win. We finally have something to work. I think the rest of the year will be a lot of fun.”

Ice, the second May Motorsports car in the top five, commented afterward, “The car was a little bit loose. We made some changes for the feature and we lost a little forward bite. I kind of struggled with that all night and that’s why I was lacking. Other than that I guess we held off a few other pretty good cars. That’s okay too. We did all right.”