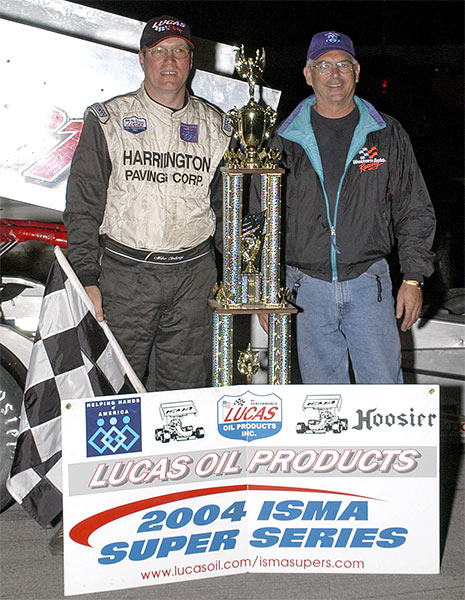 Sandusky, Ohio – Friday night Mike Ordway was in victory lane after winning the ISMA Lucas Oil/Helping Hands of America 40 lap event, a place he had been before. But, Saturday night’s Hy-Miler Nationals event was the one he really wanted. He had tried and tried, but lady luck had always turned on him. This weekend, he did it all. He won the 40-lapper on the last lap and on Saturday, he needed a couple yellows to catch race leader Nokie Fornoro, but the chips fell his way this time.

On a lap 83 restart, after working his way up toward the front spot, Ordway tried to make his move on Fornoro. A brush of tires sent up sparks, but Mike patiently dropped back and let the race come back to him for one more lap.

On lap 85, the Fremont, NH driver took the lead for good with a similar fourth turn pass. The race went green and nothing was stopping Ordway from winning the last leg of supermodified’s Triple Crown. The 100-lap victory at Sandusky Speedway completed his triumvirate of victories. Only three other supermodified drivers in history have accomplished the feat of winning the Sandusky Nationals, the Oswego Classic and the Star Classic – supermodified’s three biggest races. It was a culmination of a dream and a long time coming for the driver of the Clyde Booth 61.

Ordway in victory lane described his second win in two days, “Nokie was gone. He went right to the front and he was gone. I was just kind of pacing myself and then I saw him getting away, so I had to pick up the pace and stay with him. You really don’t know how far ahead they are so I picked it up and got with him. We had a couple of cautions that closed up the field and that was good for me. Earlier I knew Nokie was way ahead and it bothers you a little. You know you want to pace yourself, but you want to keep up too. It’s kind of hard to do that. We got lucky with some yellows and brought the race back to us.”

When asked what changes were made from Friday night to Saturday, Mike replied, “We didn’t do anything different. We had the same car –the same setup – we just ran a longer distance. This race has gotten away from us a few times. We were just lucky enough to get it tonight. It feels good to win this. To be one of the four guys who have won all three big ones makes it extra special. It would make it even better to win all three in the same year. So it’s one down and two to go.”

Nokie Fornoro, who had had run a strong race out front for much of the race surviving several yellows and a red, watched helplessly as his lead was eventually eroded by Ordway. “Danny and I talked about it tonight and we didn’t know if we were going to be great or terrible, so we took a chance and it ended up being really good. I didn’t need the cautions. I wanted to run 100 laps green because I do like to run long races and keep it going because cars change. The cautions kind of hurt me because your tires go through heat cycles, but everyone else had the same disadvantage. I looked at the scoreboard and I saw Mike in third and I said ‘I’m in trouble.’ And then he got into second and I started hearing him. I just couldn’t go any faster because I had used my tire up quite a bit but I still had enough to finish second. We brushed a little there on that restart. I didn’t know he came up there. I think I got into him or however it was and he pulled out, thank God. We love racing each other and Mike is such a gentleman on the track. I just want to congratulate the Mike Ordway and Clyde Booth team. I’d also like to thank my crew and Helping Hands of America.”

Timmy Jedrzejek, one of the local favorites, was the sole contender for third. “It was a good night for the Enerco/Mr. Heater May Motorsports car. A podium finish at the Hy-Miler isn’t all that bad. We were a little tight and we thought it would free up during the race and it really didn’t. Hats off to Mike Ordway and Nokie. They did an excellent job, finishing first and second. I’m sorry Joe (Gosek) had a problem with the motor on the 77. We’ll take a third place and head on to Mansfield in a couple weeks. We have a little bit of time on that track and maybe we have something up on the other guys. It’s going to be a big challenge there and we’ll be back for Friday and Saturday at that track.”

After a long day of qualifying, with time trials, heats and a consolation, twenty-six of supermodified’s winged best were set for the century-grind. Even before the start, bad luck befell two cars. One, the polesitting car of Lou Cicconi, would not fire due to a mag problem. He eventually pulled out before the start after several attempts to fire. Jon Henes was next to go with a fluid leak, again before the green even fell.

Finally green fell and Randy Burch took up the lead but within only two laps, Eric Shirey was on the hook after a skirmish with the wall in turn two.

On the restart of lap 2, Nokie Fornoro, who had been scheduled for a fourth starting spot, was into the lead past Burch, immediately building up a healthy lead on the rest of the 26-car field.

Fornoro put his first lap car down on lap 8 when he passed the ailing Ryan Coniam’s 74, leaving Randy Burch, Mark Sammut and Ricky Wentworth behind him battling for the next spots. His lead increased lap after lap until the 29th circuit when yellow fell for Wentworth and Denny Fisher who came together hard. Both cars were hooked.

On an attempt at that restart, Johnny Payne’s 88 flew off the track. He was pushed back on but pitted soon thereafter.

Fornoro was in command as the race played out. Mark Sammut moved into second with Ohio speedster Timmy J moving into third. Burch, Dave McKnight, Mike Lichty, Chris Perley and Russ Wood were the next in line.

Unfortunately, red flew on lap 52 as Gosek’s 77 lost a motor sending him down the front stretch and off turn one. The close running cars of Belfiore and Carpenter were taken with him and the clean up ensued while the remaining cars on track refueled.

It was all Fornoro up front on the green while back in the pack, Ordway was beginning to make his move. He was second by lap 57, leaving Sammut a strong third. Heartbreak struck the Canadian driver on lap 59 when the 78 lost a cylinder, ending the night for Sammut.

With forty to go Fornoro looked to be putting his first-ever Hy-Miler Nationals home, but the silver 61 was on the horizon and Nokie was well aware of what that could mean. Timmy J, McKnight, Lichty and Perley still held onto the top five, but the tolls of a long race were evident on many of those cars who now treading more carefully than usual.

With twenty to go, Ordway sat right on Fornoro’s tail as they approached the Belfiore 8 to put him down. The yellow that Fornoro dreaded would come, did so on lap 83 when Belfiore’s 8 stopped in front.

On the green was where Fornoro and Ordway sent up sparks off four, but Ordway patiently backed off from the potentially dangerous situation. He knew he could do it again one lap later and on lap 85, he made the move off four smooth and clean.

Only 11 cars remained when Ordway crossed the line for the win that had eluded him in the past. Fornoro held onto his second for great run while Timmy J was third running with a lap car between his May 7 and fourth place finisher McKnight. Russ Wood grabbed fifth from Perley who was fighting his 11 with all he had.

Dave McKnight, whose season has not been the best to date, was happy with fourth. “The Lucas Oil-Patco Transportation supermodified ran decent. We broke a rear end and had problems Friday night. We rebounded and the team stayed focus to come out with a seventh place and then tonight we did the best we could with what we had and finished fourth. Hats off to everybody, they did a great job. Hats off to Mike. He definitely had a dominant car this weekend. He’s going to be tough to beat the rest of the year. We’re going to stay focused. We haven’t finished a race in a while, but we’re just happy to come home in one piece. We’ll go home and do our homework and get ready for Mansfield.”

And, five-time Hy-Miler winner Wood, “My car was really good in the day. It was probably too neutral for night racing. We were loose in the feature. We were able to pick off a few at the end, but were a fifth place car I think. The car’s still new and we have to play with it. A second and a fifth is not a bad weekend compared to what we have been doing.”

ISMA returns to Ohio for a similar two-day race format at Mansfield Speedway on August 13-14.