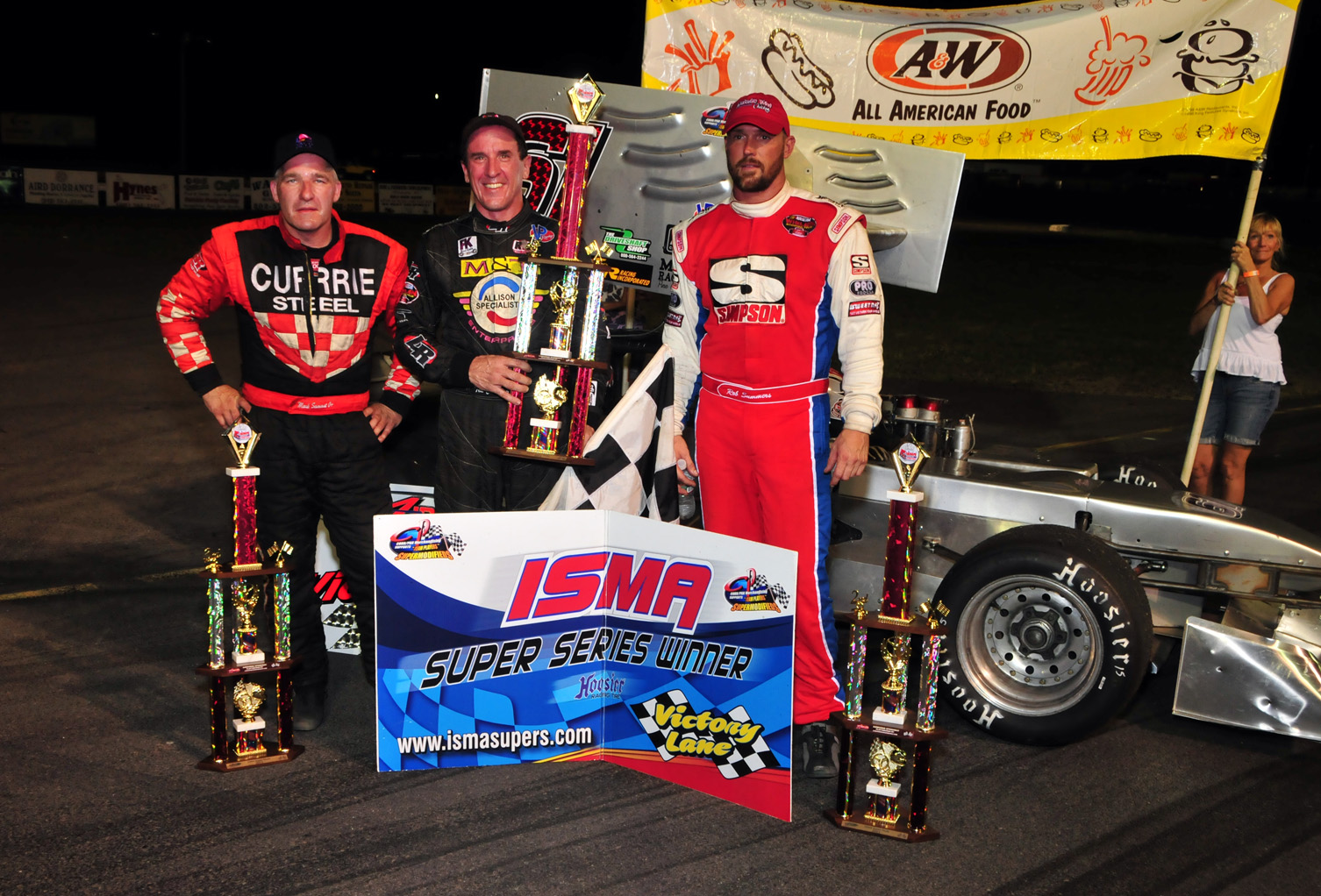 Plattsburgh, NY – Ted Christopher, long known for his exploits and achievements in modified and full-bodied race cars, is beginning to make his mark in the ISMA winged supermodified class. Before this year, the Plainville, CT driver had picked up two previous wins in only two previous supermodified outings that spanned a 12-year  period of time. This year he decided to make the supers more than a once a year, once a decade outing. Saturday night at Airborne Speedway, he put the Clyde Booth 61 into the lead around Rob Summers on lap 21 and never looked back. And, he’s just learning the cars and the tracks that ISMA races on. His third-career win came at a track that he’d wanted to race on too which made it all the better.

“ Airborne is such a nice place. I’ve wanted to race here for a while.  I’d come up here and race every week if it weren’t so far. I’d really like to thank Clyde Booth for putting up with me in this. We ran last night at Oswego and were a little disappointed. Neither one of us ran as good as either of us wanted to. It gets a little disappointing, but he stuck with me. I don’t really know these cars that well. That makes trying to relate to him what to do hard. But, he gave me a great car tonight. So I really have to thank Clyde and Susan, my friend Donnie, Larry the tire guy, and just everybody on this team who helps out – VP Fuels, Marollo Motors, C&R Racing and the Driveshaft Shop.” 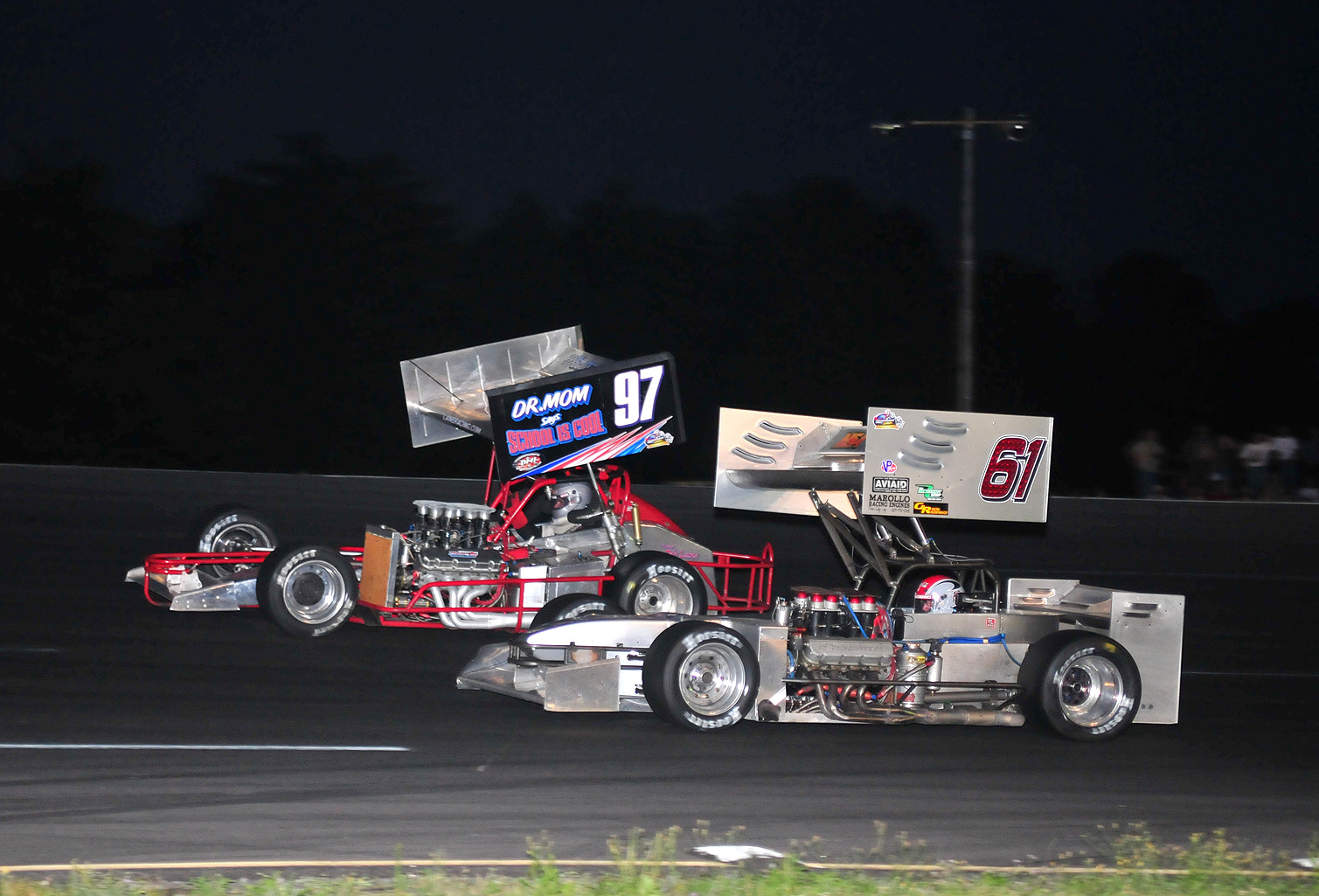 Summers, whose Holbrook 35 had struggled with some major problems at Oswego which carried over to Airborne earlier in the afternoon, showed a strong run out front before falling to Christopher.

“We had a good car tonight. We were just a little too tight in the center there and Teddy had a real good car. I can’t thank my team enough. They worked their butts off all day – Brian, Jerry, and the whole JWJ team worked nonstop from the time we got here from Oswego until the heat races. We struggled with a problem that kept us out of warm-ups, but the guys finally got it just before racing started.”

Mark Sammut was behind TC and Summers for more than half the race but just couldn’t catch up to the duo in the distance. “We had a good run until we got into third. We started going away on both ends. The tires were worn out. We weren’t as good as we were at the start for sure. I think I would have had a better chance at catching them if that last yellow hadn’t come out. I was making time on Rob – not a lot and I would have still had to get by them. Hey considering how the rest of the season has gone so far, we’ll take a third and fifth this weekend. We’ll be heading for Ohio next week to the Hy-Miler. It’s neat to travel to all these tracks in different places. That’s what makes it fun and that’s what makes it ISMA. Hopefully we can get the car a little bit better and maybe we’ll have a shot at next weekend.”

Chris deRitis and Danny Lane sat on the front row of the Della Auto Group 50-lapper and it was Lane grabbing the initial lead. But, Rob Summers only let Danny lead three circuits before he took over on lap four.   Summers was able to move quickly away as Lane and deRitis held off a charging pack of hungry supermodifieds.

Yellow fell on lap 15 for a Rich Reid spin with Reid pulling the 92 pit side and out for the night. Previous night’s winner, Chris Perley, also left the speedway for a quick pit stop.

Summers took off on the restart with Lane in second. deRitis had fallen to Christopher on the green, moving into fourth ahead of Sammut, but another yellow flew just two laps later.

Just into lap 16, Russ Wood came off turn four, but unfortunately, his rear tire flew off and raced ahead of him into turn two, causing a melee behind which would claim Jamie Timmons and Dave Duggan. Said the 2010 ISMA champ Wood later,” The axle tube broke .. just sheared off. It happens now and then. Then it’s all over.” Timmons and Duggan were out for the night.

Pitting on the cleanup were both Chris Perley and Mike Lichty, both struggling with their cars. They would both return to sit at the tail of the field. Both were not happy with the way the night and race were going. They would be less happy when it was over.

Back in action, Summers was out front but Christopher got the jump on second place Lane and was heading for the 35. On lap 20, Christopher made a move under Summers out back and claimed the lead as the clock ticked to 21.  Summers tried to stay with TC, but the silver 61 was in command now as Summers and then Sammut ran a distance from each other in the top three.

The intense action was just behind the top trio as Danny Lane, deRitis, Jeff Locke, who had set a new track record earlier in the day of 13.867, Timmy Jedrzejek and Ben Seitz were running precariously close, at times three wide, each trying to gain top five spots.

The final race yellow slowed the action on lap 31 when the 18 of Dan Bowes spun in 4. This bunched the field up but Christopher didn’t waste any time fleeing the guys behind on the restart. Sammut was able to close up the gap on Summers but that battle behind got even hotter. Lane still held off deRitis but Timmy Jedrzejek was able to get Locke to move into sixth, leaving Jeff to fend off Seitz.

On lap 35, a rare sight took place. Chris Perley pulled off the track and out of the race. Chris later replayed his night. A problem that actually had been recurring and even had been happening in his Oswego win, had not gone away. “We thought we had a motor issue. We changed motors today because of that and now it turns out it’s not the motor, it’s the fuel system. We can’t find it and it’s getting progressively worse. So besides the car being a little too loose out there, every single time I got a car length on somebody, I’d loose two car lengths because the motor would fall on its face. I was just playing catch up. I felt that there was no sense in risking the car by trying to make up ground where I shouldn’t. So, I decided we should pull it in and fix it. I hate doing that but I didn’t want to wreck the car.”

Christopher was making a home for himself on the Airborne oval as the race end loomed ahead. With five to go, it was Christopher, Summers and Sammut but that exciting battle behind just heightened between Lane, deRitis, Jedrzejek, Seitz and Lane. And, it lasted until the checkered flew.

As Christopher took the checkered well ahead of Summers and Sammut, rookie deRitis was able to grab fourth just ahead of Timmy J. to complete the top five.

Newcomer to the supermodified deRitis was pleased with fourth, his best finish to date. ‘My run went very well. Starting on the pole made it very interesting for me. I really wanted to get out in the lead as quick as possible. I knew I was probably going to fade back. Everyone was really quick and this being only my fourth race, made it pretty hard. Racing out with the big guys made it fun. Following them, learning their lines, seeing how far to drive into the turns, really taught me a lot. Halfway through the race I really started to get tired. But, I kept my composure up and got a fourth place finish. It was a lot of fun tonight and I learned a lot.”

Timmy J, new to the Soule 32 team and new to a lot of the ISMA tracks this year, added a fifth to his repertoire of finishes of a fourth and a sixth in the four races he’s run to date. Said the Independence, Ohio driver, “One spot better than last night. That’s good. We had a good car. We were just not as good as the other four. But, we had a good race. We’re building here. And, we’re excited about going to Sandusky next week to Hy-Miler to see what we can do back on my home turf. It’s a track we’ve got some laps on! Some of these tracks like Airborne are new to me, but not Sandusky. It was a good night tonight. We’ll take it, load up and make the long trip home.” Seitz, Lane, Paul White, Eddie Witkum Jr. and Jeff Locke finished up in the top ten.