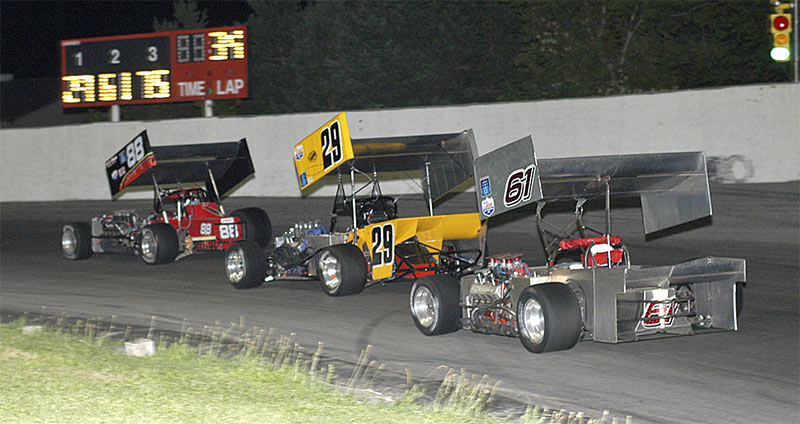 Sandusky, OH – Mike Ordway took away what might possibly have been Russ Wood’s first win of the 2004 season Friday night at Sandusky’s ISMA 40 lapper with a half lap to go. Ordway got by second place runner Lou Cicconi on a lap 25 restart and took fourteen laps to catch up to Wood’s back end. As the checkered was about to be unfurled on the front stretch, Ordway and Wood approached a lap car and in a spectacular move, Ordway chose the right way around, and cranked it left just two more turns to take the victory. It was Ordway’s second straight win in this Friday night preliminary to the prestigious Hy-Miler Nationals, but it’s this prize Ordway desires most.

Said the Fremont, NH driver in victory lane, “We had a really good run…. Snuck right up on him (Russ), but I’m not sure I could have gotten him if we hadn’t run into the traffic. That helps and that’s racing. We’ll take it anyway we can get it. These races are hard to come by. I’ve won this race before but I need the Saturday (Hy-Miler). I haven’t done that one yet. I’ve been close, but I don’t know. It just hasn’t come.”

Wood, who is the defending Hy-Miler champion, brought a laugh from the crowd nearby by thanking Mike for taking his win. He then commented, “The car’s running better. We made some changes today and I’m more comfortable in it. I found the groove and we were running all right, but when I saw the 61 on the scoreboard I knew we could be in trouble. Mike’s been running really strong this year. I was waiting for him and sure enough he was there. We got to the traffic and it could have gone either way and this time it went his way.”

Current point champion Chris Perley finished up in third, not really in the front running battle, was just happy to survive at the Sandusky track that has not been his best venue.

He said, “To come in here and actually finish with the wheels on is what we were really hoping for. This track, we are still struggling with and to get a top three is great. Mike did a good job, but it was a tough break for Woody with the year he’s been having. But then he’ll probably beat us all tomorrow. If we can do as good tomorrow as we did today, I’d be happy. We’re just looking for a finish. The crew gives me a good car. We’re all working together as a team to see if we can eventually figure this place out. And, if we keep making the small steps now I figure in ten or twelve years maybe we’ll be in the top two!”

A strong field of 25 winged supermodified competitors started the Hy-Miler preliminary in what purported to be an exciting 40-lap sprint after the heat and consi action. Doug Saunier grabbed off the early lead, but Lou Cicconi, struggling with his car all season, picked off the 91 by lap 3 and headed to a long lead.

Yellow negated Lou’s lead on lap 9 when Mike Lichty and Joe Gosek, in the May 77, touched. Lichty was able to change a flat, but Gosek had to park the car. On the restart of this lap, two more cars tangled in a jumble near the tail. Vern Romanoski’s 5 was hooked while the 81 of Denny Fisher rejoined the field, only to fall out several laps later.

Cicconi tried to flee the scene behind him on a long green stretch, but Wood, a master at Sandusky, picked his way up to second past Saunier, with John Payne, Ordway, Nokie Fornoro, Perley and Pat Abold all right there.

By lap 18, Wood was planted on Cicconi’s rear with Ordway a distance back in third. Saunier, Payne, Fornoro, Perley and Abold raced just ahead of Justin Belfiore and Mark Sammut. There was action everywhere on the fast half-mile.

Yellow on lap 25 slowed things when Jon Henes slide off turn three. On this restart John Payne made a similar trip to fly the flag a second time, negating a pass Ordway had made on Cicconi for second. On the second restart, Ordway made the pass good and he headed for Wood.

Wood and Ordway diced by several lap cars as the race wore down and on lap 36, the V2 of Jim Shirey provided what looked like a race determiner and here Wood gained the advantage, but on lap 39, the 52 of Randy Burch loomed in front of the top dueling duo, and this time Ordway picked the right line around off the second turn. The crowd roared with approval at the exciting finish as Ordway, Wood, Perley, Pat Abold and Timmy Jedrzejek crossed the line in the top five.

Abold had wanted a little more than fourth, but he settled for it. “This wasn’t what we wanted tonight for sure. I felt like we had a better car than that earlier tonight. We ended up a little bit loose middling off. We’ll have to work on that for tomorrow night. In a long run I think we have a good car. We’ll just see what happens tomorrow in the longer race. The car gets better and better as the race goes on and it started to do that tonight. I needed a longer run and so I think we should be good tomorrow night.”

Timmy Jedrzejek, who finished fourth in the consi to start way back in the field, was smiling after his fifth place run. “It felt like we passed a lot of cars, that’s for sure. It’s a shame we missed so badly in the heat and consi earlier. I had to start 22nd. We made a bunch of changes before the feature. I told the guys it was a crapshoot; just do anything we can to make the car turn because we were so tight earlier. I knew as soon as the green fell that we were much better off. I just tried to get out of it what I could. When I crossed the finish line I wasn’t sure where I was. I’ll take the fifth for sure, going into tomorrow.”