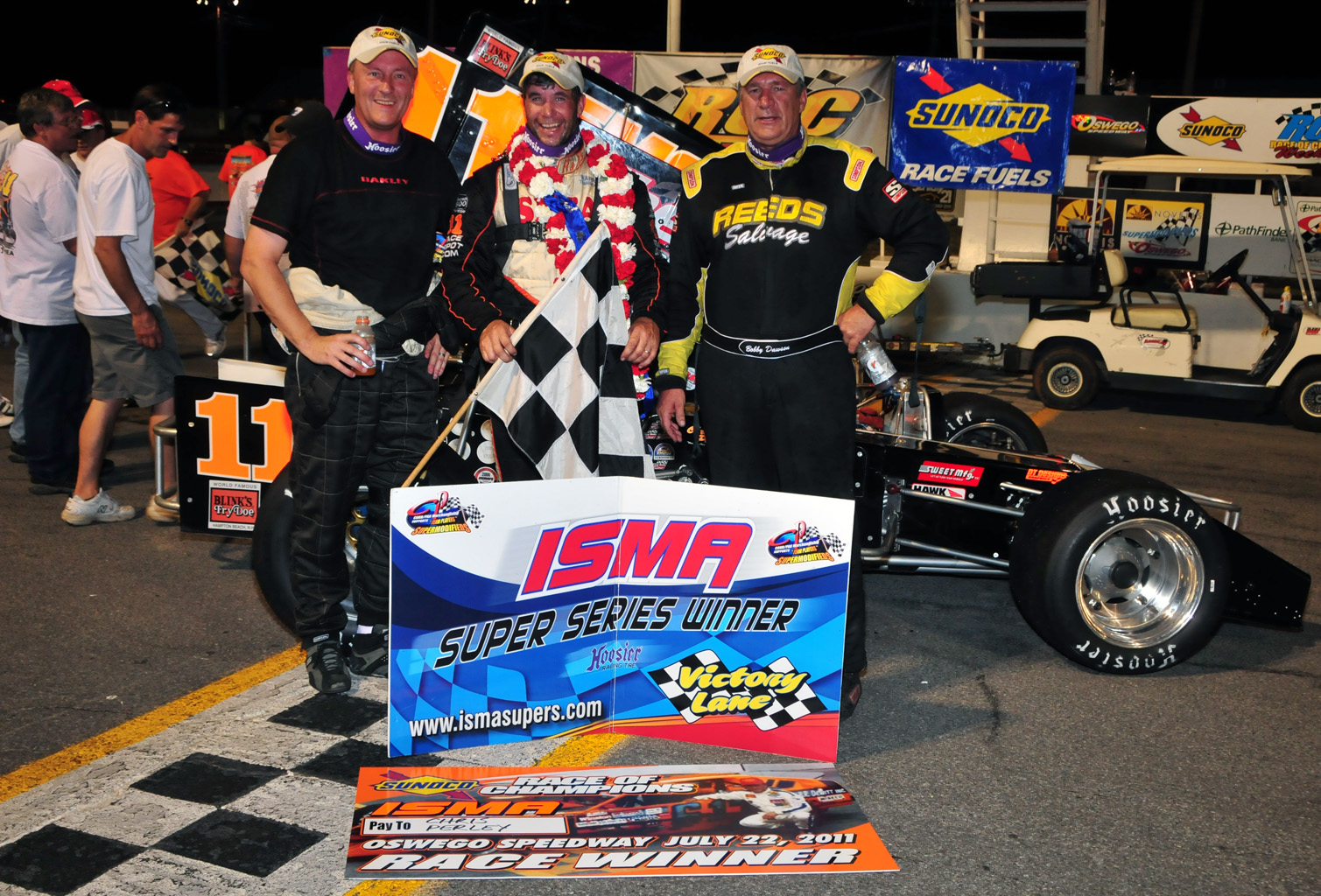 Oswego, NY – Chris Perley stealthfully stalked down a high-flying Ray Graham Jr. Friday night at Oswego to take his sixth career winged win at the “Steel Palace.” Perley, starting 12th in the 26-car ISMA field, was working his way forward in the early going when Ray Graham, who started 14th, blew by the 11 on the outside on an early restart. Graham was flying by car after car and was a half-track ahead of everyone soon after taking the lead on lap 10. But that big lead dwindled lap after lap as Perley gave it all he had after moving into second on lap 19. As the race wore on, the lap traffic and car fatigue began to play a role. With ten to go, Perley was reeling in Graham and by lap 44, the 11 was in the lead, but Graham wasn’t giving up and Perley knew it. It was survival of the fittest to the checkered.

A hot but happy Perley waved the checkered high above his wing to the crowd’s cheers.  Perley, who had notched his first career ISMA win at Oswego in 1995, admitted in victory lane that he had had to change some of his old Oswego ways. 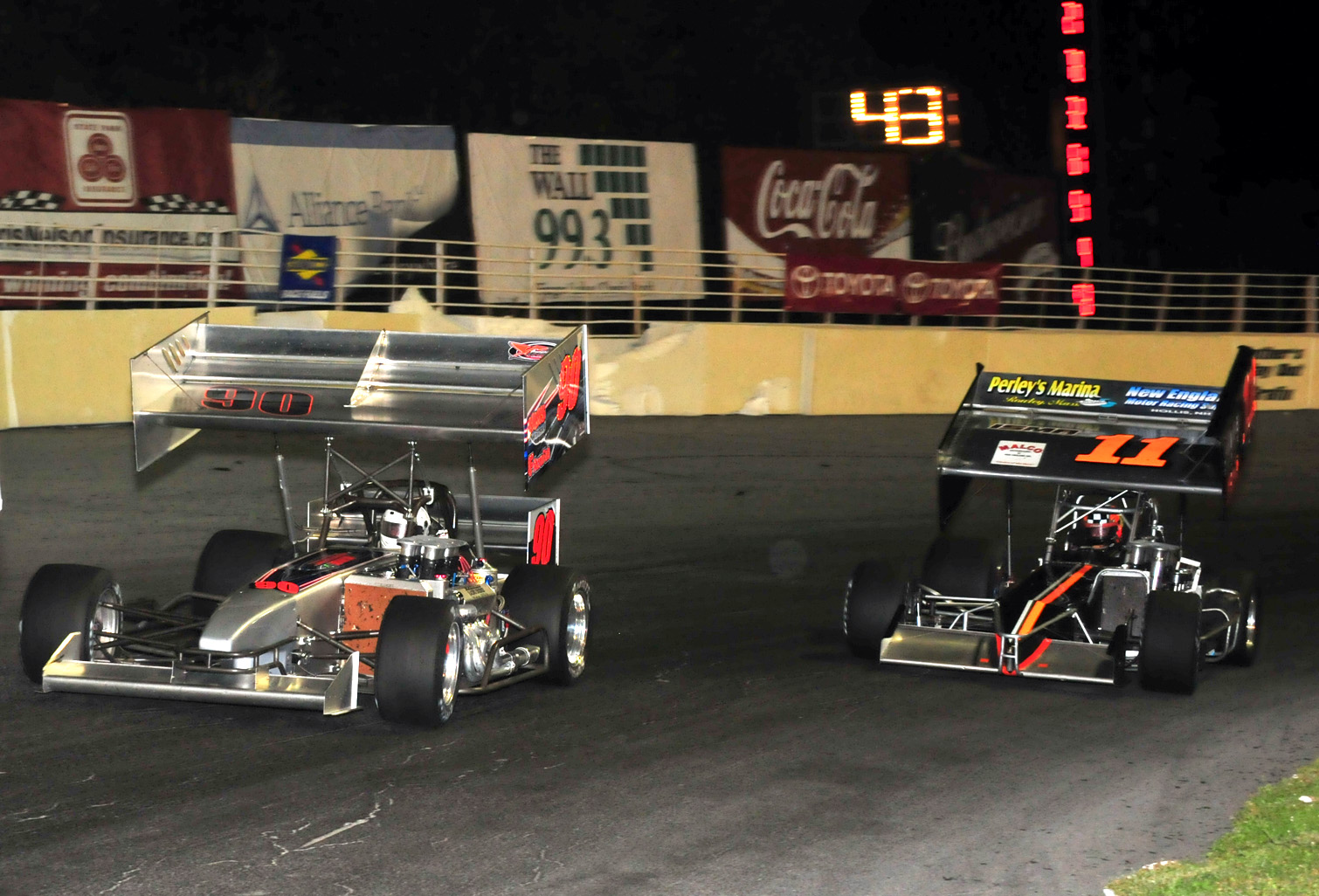 “I learned a little bit tonight. When we used to come here I always used turn one to pass everybody. Ray schooled me tonight. He woke me right up. I passed somebody early in the race and I tucked it in to see what I had and there goes Ray by me. He was getting two cars at a whack. His car was on. I didn’t think I was going to get him. When I finally got into second I couldn’t even see him. I was praying that lap traffic might help me tonight. And, wow, I ran as hard as I could every lap after the one Ray passed me.

“My car wore out just after his did. I saw that he had started to use it up and he was having trouble with lap cars.  I finally got under him and at the same time I was tight. Then my car went to both tight and loose and I was done. I was trying to get one car in between me and him and hoping that would be enough. I don’t know if he ever cleared that lap car but I just made myself wide at the end. I think if I had passed one more car I would have spun out.

“It was crazy tonight. It was a well-earned win. The crew does an awesome job with the car with the help of Ed Shea and R&R Motors. Vic Miller prepares a great car. I have a great crew and I love racing this car. And, I love racing at Oswego.”

Graham, driving a brand new Xtreme car, was happy with the car’s performance. “This was the first time out with the car. It just went where it wanted to go. It was really, really good on the restarts. I was actually hoping for a couple more cautions because we would get two or three cars on a restart. For a brand new car just out of the box and to get beat by the king here, what can I say, it was a good run! Toward the end there Chris was loose and I was looser. I could run behind him at the end, but couldn’t get by. Thanks to Paul Colloca who built this car, Mickey Marollo who does a killer engine and all crew and sponsors. Without those guys we wouldn’t be here.”

Early race leader Ohioan Bob Dawson ran a pretty tough race out front until the dynamic duo caught up and got by.  Before he spoke about his race he had high praise for the new track owners. “First I want to thank Eric and Johnny Torrese. They are doing a heck of a job bringing this place back up to where it should be. It’s fun racing here again. Those guys deserve a big round of applause. I have to thank the Reed family for this car. It’s an awesome piece right now. Also Reed’s Salvage, Stewart’s Appliance, TJS  Level Performance, and the Hoosier tires were fantastic. I like coming up here and racing. It’s fun. I didn’t have anything for those two up front. They were just checked out. I was just running my own race. We were good where we were at.”

Dave Duggan and Dawson led the car to green but only one lap was in before a back of the pack melee occurred affecting Rich Reid, Bob Magner, Johnny Benson, Bob Bond and Chris deRitis. Unfortunately, it was Benson who had high hopes of doing well his first winged race at Oswego, was the first car out of the race.

Dawson led the way for a couple more laps before yellow flew again for Magner with Jeff Abold calling it a night in the Rayvals 04.

This restart saw Graham grab off a couple cars as he moved furiously forward. On lap 5 he was third. On lap six he was second and by lap 10 he was leading as he flew by Dawson. Jamie Timmons held off Perley while Dave Duggan still ran top five.

There would be no more stops in the action, which allowed Graham to move in and out of traffic with ease, building up what appeared an insurmountable lead. Perley, however, was Perley. Undaunted, he gradually cut into that lead. Graham, just before midway, had gotten stuck behind Dave McKnight in the Morton 70 and the 11 was gaining.

By lap 30, Graham had Bobby Bond in between his car and the 11 as Dawson ran alone in third ahead of Jamie Timmons, Duggan, and Eddie Witkum Jr. Also coming on strong from behind was Mark Sammut who moved up to sixth around lap 35.

All eyes were up front as Graham was planted behind Ben Seitz and couldn’t quite get by. Perley just kept coming and he was right on Ray’s bumper by lap 42 as Seitz remained in front of both. Perley finally made his move in lap 43 and came across with the lead on lap 44. Graham was still within shooting distance however despite the fact that Perley had tucked Seitz in between them. On lap 48, Ray was back on Chris’ tail and now Chris had a slower car ahead of him, but Chris was able to hold on to take the win. Graham was second and several lap cars separated them from Dawson in third.  Jamie Timmons in a fine run ended up fourth.

Timmons was a bit speechless after some bad luck of late. “The car was good but I started loosing the brakes in like the ten to seven laps to go. I kept reeling Bobby in but couldn’t get enough to get him. Fourth is great for us especially after the last few weeks we’ve had. Hopefully this can carry over to Airborne and maybe out to Ohio if things go good. I’d like to thank Woody’s Auto and Towing, the Moonies, Rod End Supply and everybody else that helps out all the time.”

Moving into fifth behind Timmons was Canadian Mark Sammut, who also was grateful for some good luck for a change.  “This was a little better than the last few times out. Unfortunately we got boxed in at the start and lost a few spots, which I had to make up. The car was really good at the end. We were probably as quick as the leaders at the end but we were a half-track behind so it was too late. This is a big improvement over the last few races like I said, I just didn’t get going soon enough. We’re happy with the car and hopefully we’ll get it geared up for tomorrow and go from there.”