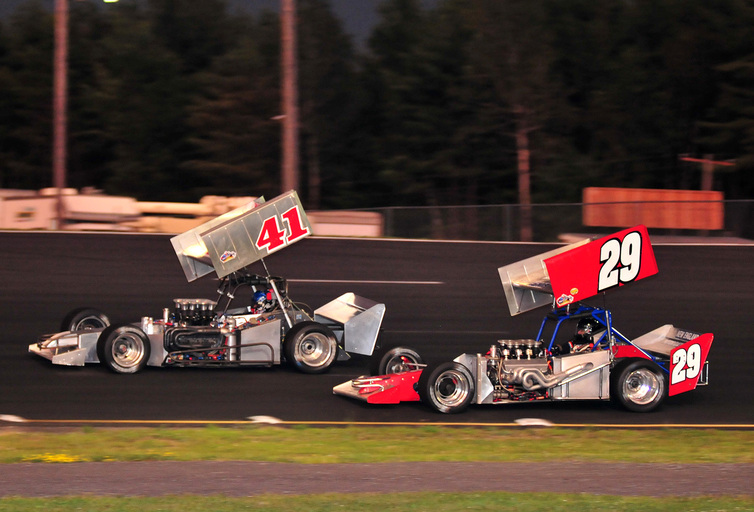 Plattsburgh, NY – The large, enthusiastic crowd that filled Airborne Speedway Saturday night to see the ISMA winged supers race for the first time, certainly got their money’s worth. From the speeds, the qualifying heats, to the wave lap and down to the checkered flag, the fans were into it. The northern New York four-tenth’s mile oval seemed to be made for the powerful supermodifieds and it showed in the racing. “Awesome” was the by word from the drivers and fans alike at the end of the Airborne 50-lapper. It was a race to remember for sure – especially for winner Russ Wood and runner-up Justin Belfiore.

Said the man who holds second place on the All-Time ISMA win list, “This is the most fun I’ve had in a long time. This was an excellent race. I loved running with Justin. My car was working really well in the beginning. In the long run it got a little tight but those couple of yellows helped me. I was cranking the brakes and got Justin there for a little while. He was covering the bottom. In the last lap I said to myself I have to try something different. I just put it on the outside. It was a little skatey but I went for it and it stuck. It was a ball out there. I love this place. I hope we come back for sure. It’s a nice facility. They run the show off quick. We’re going to be out of here at a decent time. I have no complaints about the place. It’s awesome.”

Belfiore, who had spent much of June running 350 supers at Lee and experiencing some damaging crashing, echoed Wood’s excitement.

“It was fun for the first 49 laps,” said Justin. “Actually it was an awesome race for the whole time. I didn’t want to second-guess my decision in the ending laps. I decided to go low. I knew Russell was going to do something spectacular. He always does. He was under me a couple times but I was getting a little bit loose. I wasn’t going to be able to stay up there on the outside one more time. I played the cards I had. I made a decision on that last restart of what I was going to do and stuck by it. It wasn’t the right decision. It might have been with someone else behind me but you are not going to hold Russ Wood back if he’s better than you and this time he was just a little better than us. We were like a sitting duck out front.

“I’d like to also thank a couple people who have been helping me through my recent wrecks and all. One is Northeast Metals Technology. They have been a big part of this. They stick by me 100 percent as well as Vinnie Greco of Serve Pro in East Boston. Also Thomas Tombarello Jr. Electric and Rusty Raymond, he’s the crew chief. He’s been really awesome.  He’s been working every night until 2 in the morning. This was a great race and I’m happy to finish second. This place is awesome. You know when you run good, you’re going to say it’s awesome, but this is an awesome racetrack. It seemed like a real fun race from where I was sitting and I’m sure the crowd enjoyed it.”

Third place runner Bob Magner had the catbird’s seat, just far enough behind the leaders to watch the action but to grab a spot if either faltered. He’d experienced a little bad luck himself in the first couple ISMA shows and was more than pleased to take a third.

“Hey, we finished a race again. This is pretty cool. What an awesome race. I was pretty happy to see my teammate make that move on the outside at the end. It’s absolutely awesome. I’m pumped. I hope this is a step in the right direction as a team going into Sandusky next week. These guys on the crew do an awesome job banging their heads repeatedly to make this car go fast. I think we’re on the right track! My day didn’t really start out that well, but this really is an awesome place to race. The place was packed and I don’t think the fans were disappointed. Thank you Jeff Holbrook, Seabird Environmental, JWJ Container, New England Motor Racing Supply, Red Devil Brakes, Woody’s, and Sweet Manufacturing, our tour sponsors Corr/Pak, Hoosier Tire, Ed Shea Concrete, RaceDepot, Simpson, Seymour Enterprises, Doyle’s Bikes, Race Threads, New England Motor Racing Supply, Slice n Go Deli, BS&B Radiators – just  everyone who helps out with our team and with ISMA.”

Belfiore had the pole for the show and immediately claimed the lead after an early yellow for Rob Summers in the Holbrook 35. Bob Magner moved quickly up to second gluing his 41 to the 98’s tail.  But the computer showed the fast man on the track to be Wood who didn’t waste any time getting into third as the race moved along quickly.

On lap 13 things slowed for Dave Shullick Jr. who had the Booth 61 slow and stop. The car was pushed in into the pits and was able to return to the rear. Jamie Timmons and Bobby Haynes joined Shullick in the pits with only Haynes returning.

The lap 13 restart saw Wood bear down on Magner who tried in vain to hold off the storming 29.

On lap 17 the 61 of Shullick moved back into the pits for good as the battle raged out front between Belfiore, Wood, Magner, Oswego’s “King of Wings” winner Bob Bond, Ben Seitz and Mike Ordway Sr.

By the halfway mark, it was evident that a classic battle was setting up between Belfiore and Wood, as Magner, Ordway and Bond were a couple car lengths behind. Traffic also had started to make things even more exciting. While Belfiore and Wood moved easily by a couple slower cars playing cat and mouse, a couple more blocked Wood’s progress giving the 98 a bit of a cushion but not for long as the lap counter clicked to 30.

Suddenly on lap 35 things came to a screeching halt as just out of turn four the 51 of Dave Duggan got out of shape causing some major braking. Red dropped with the track blocked. Most cars sitting in 4 had just stopped but Ben Seitz ended on the hook with pitting by Jeff Locke, Vern Romanoski and Craig Rayvals. Of the trio, only Rayvals failed to reappear.

With 15 to go, the green dropped again and for a few laps, Belfiore had not only Wood, but Magner, Mike Lichty, Ordway and Bond bearing down to try to steal his thunder.

At the lap 40-mark, Wood was applying all the tricks he’d learned in his career, which has earned him 48 ISMA wins and multiple championships, but Belfiore was up to the pressure. On lap 42, the 29 was alongside the 98 and the two rode the wide Airborne oval circuit by circuit with at times Wood leading but the 98 wresting back his hard-earned lead.

The lap 45 yellow for Mike Ordway allowed everyone to breath. Ordway’s Vic Miller 1 had experienced a flat while running fourth. “Had a right front flat. Went off the track and mowed some grass, Ordway said later. His crew made quick work of the flat and Ordway returned at the tail

The green flew for the final time after the incident. Wood made an attempt at Justin as they came off four for the flag, but once again Belfiore repelled the move and for the next three laps he continued to do so as Wood tried the underside in vain. But, on the final lap Wood only had one last try. He sized up the 98 out back, pulled outside and put his foot into it. As the pair moved off turn 4 for the checkered, Wood nosed ahead to take the win. Belfiore came over in second, Magner third, Lichty fourth and Bond fifth.

Lichty, the current ISMA point leader, while a little disappointed in his run, still finished on the positive side. “We started 12th and had a lot of race cars to pass. I guess it was an all right night. We just set it up way too loose to run with the leaders. It was a good race and I’m happy that Airborne had the ISMA tour come here. It looked like the fans had a great show to watch! Congratulations to Woody. I was actually watching it from my spot as Russell took the win. We’ll take a 4th. We’re struggling a bit with the tires. We’ll go on to Sandusky where we run well. I know the 11’s not coming so hopefully we can pull out a win there. This track is beautiful. It’s got two lanes. It is a bit tricky to pass but that makes for good racing. I’m extremely impressed with this place and the people who run it. Hopefully we’ll be back here.”

Bond, coming off the biggest win of his supermodified career on July 10, said, “We’re happy with fifth. It’s not what we really wanted, but we’ll take it. The car was really tight again and we were expecting it to loosen up a little bit, but it didn’t. I’m happy to have hung on to fifth. I love this track. I think it’s a good size. It has lots of banking and lots of room. It’s a nice track.”

The ISMA contingent heads for the big two-day Hy-Miler Nationals for their next outing on July 23 and 24.