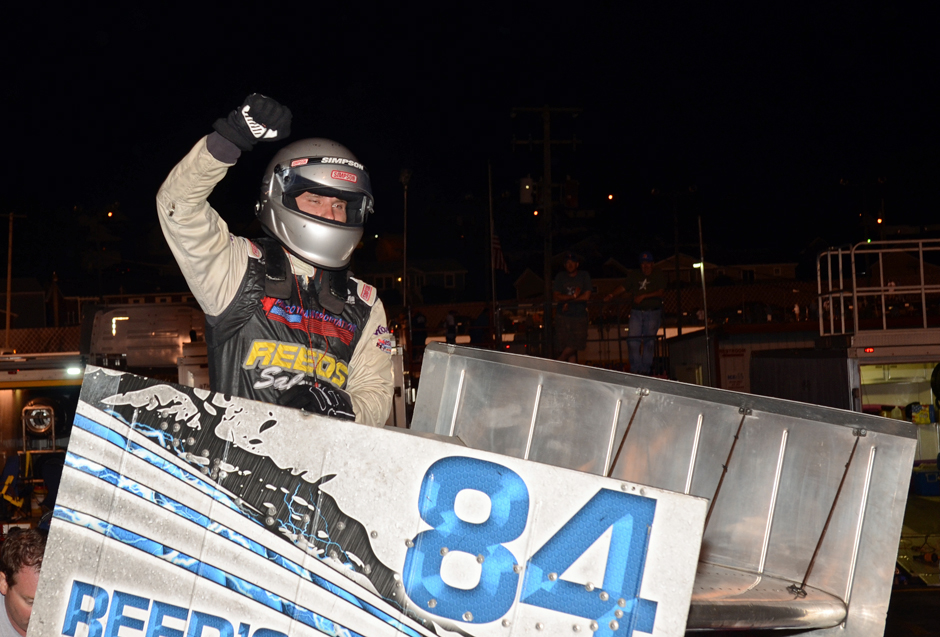 Jennerstown, PA – ISMA’s return to the Jennerstown Speedway after a nine-year hiatus proved to be well worth the wait. A quick thunderstorm just prior to feature time rolled in and out but it did not dampen the excitement that proceeded it. In a seventeen minute, twenty-eight second, 50 lap feature, only one short yellow flew to slow the action. The side by side racing and lead swapping out front, left the fans who stuck with it, in awe. Early leader Dave Shullick Jr, lost his spot to Mark Sammut, got it back one lap later and then lost it again to Mike Ordway Jr., but regained it in the same lap. When Ordway Jr.’s 61 shut down on lap 32, Mike Lichty, moving up from ninth, became the challenger and he was able to take over out front on lap 33, never to give up the spot. He took the checkered 17 laps later for a $4,200 payday.

Lichty, who won the ISMA opener at Oswego, became the only repeat feature winner this season and he was quick to credit the people involved.

Said Lichty after the race, “This was just an awesome job that was done by everybody. After we got here I realized how I had forgotten how quick this place is. We weren’t that good in practice. We were on extremely old rubber and I noticed a lot of people were out there on new rubber. I was really too concerned then about how fast the speed was. I was more concerned about how the car was. I figured it we were going to practice on old rubber, that was where the car was going to be later on in the race. Everyone just worked hard. We missed time trials just a little bit as the car was a little off. The heat race was really good and then the car was good, good, compared to everybody else in the feature. The car was a little loose but compared to everyone else obviously we were the quickest race car.

“I just can’t thank Craig Reed and Reed’s Salvage, Dianna, Carol, Raven, my father with PATCO enough. Then we have a pretty good deal with the Ohio people, Dickie and Dave, our crew back home.. we kind of bounce the car back and forth from shop to shop. My father, Mark, John, everybody who helps out there, BJ being in Pennsylvania, and we have a shop in Oswego with Dave Syrell and Greg. So this is for all of them. They all work so hard. And, finally a big thanks to Dennis and Level Performance too for the horsepower. This is the second win for the team this year, hopefully we can get more.”

Dave Shullick Jr. who also has one win on the ISMA trail this year, fought hard to make Jennerstown his second, but fell one spot short.

“I just missed it tonight. I was really loose from the git-go and just hung on as best I could, fought everything I could fight. And, Lichty was better. That’s all there is to it. I drove everything I had to try and defend the position out front. Then Ordway got underneath me once and I ran him tight and clean. Then I saw on that restart that I had a big lead on Sammut as I was getting some hand signals, but then actually I didn’t and Mark got by me so I had to fight to get him back. It was just one of those races and I’m happy to get second and go on to Hy-Miler.”

Mark Sammut who has only been out of the top six finishers once this season, claimed his second consecutive third place in two weeks. Taking the lead from Dave Shullick Jr was a bit of surprise to the Canadian veteran.

“Considering how the day started out I figured we’d be lucky to come up with a top ten tonight. So it was a great run for me in the feature. We changed a bunch of stuff before the feature and it all worked out. If anything we almost went too far. So after running so bad, to get another top three, it didn’t turn out so bad after all. I don’t know if I could have passed Shullick but his guy was showing him he had a big lead so he backed off a little bit and I figured I’d try to lead at least one lap, it it’s only one. And, you get five points for leading a lap, so why not?”

On lap 5, Shullick, who had started to pull away, got surprised by Sammut who stole the point in the second turn of that lap, to take a short lived lead. Ordway, Shirey, Jim Paller, Timmy Jedrzejek, Ben Seitz, and Mike Lichty were the next up in the order as the pace quickened.

Shullick Jr retook the lead shortly and began to pull away from Sammut and Ordway Jr. as Danny Shirey held back the pack behind. On lap 11 Ordway Jr., got by Sammut and headed for Shullick with Sammut in tow. Seitz and Lichty raced hard in the top five while Shirey, Paller, Dave McKnight, who had crashed earlier in the day but was able to get back it back together with the help of many, ran eighth just ahead of Jedrzejek, Moe Lilje and Mike McVetta.

By the lap 24 mark, Shullick had begun to enter the back of the field and Ordway used this opportunity to get alongside the 95 and by to take the lead, but Shullick swapped spots with the 61 moments later as the crowd cheered on the dicing duo at top speed.

Shullick continued his fight for the front ahead of Ordway as Lichty was running a strong effort in the 84 and was able to dive by the 61 on lap 30 as a back marker slowed the field somewhat out front. Danny Shirey exited the track negating another good run in the 49.

On lap 31, Ordway suddenly slowed, losing third, and bringing out the yellow on lap 32 when he could not make it into the pits. The car had shut down and speculation later by car owner Booth indicated a magneto may have been the cause.

With the field bunched, Shullick had Lichty hot on his tail as Sammut took back third followed by Seitz, Paller, Moe Lilje, subbing for Rob Summers in the 74, Timmy J, McKnight, McVetta and King of Wings winner Trent Stephens.

Lichty didn’t waste any time as he was around Shullick in between turns three and four shortly after the restart and quickly put the pedal down with victory number two on the season in sight.

The last ten laps were easier ones for Lichty as he stayed out front Shoe II and Sammut. McKnight race ended as he pulled the repaired 70 pitside near the lap 40 mark.

In a blink of an eye Lichty saw checkers a couple car lengths ahead of Shullick and Sammut with Lilje making a diving pass going down to the line on Seitz to take fourth.

For the versatile Lilje it was his second consecutive fourth place in a different ride as he swapped between the 76 and 74. “It was a another good run. We were a little free but it turned out that we saved a little bit of tire early in the race and hoped for a yellow. That strategy seemed to pay off I think in the long run because a couple guys backed up before the yellow that I got and once the yellow did come out, I think we ere better than a couple of the cars in front of us. I think it would have been nice to see the yellow maybe ten laps sooner, but it is what it is and beggars can’t be choosers. Again, these guys busted their tails and put a pretty good race car under me. I’m glad we could bring it home for another top five.”

Seitz, due to the hour and facing a long haul back to Bourne, Mass., had left before commenting but had to be happy with a top five adding to his sixth place in the ISMA point standings going into Sandusky’s two-day Hy-Miler in two weeks.