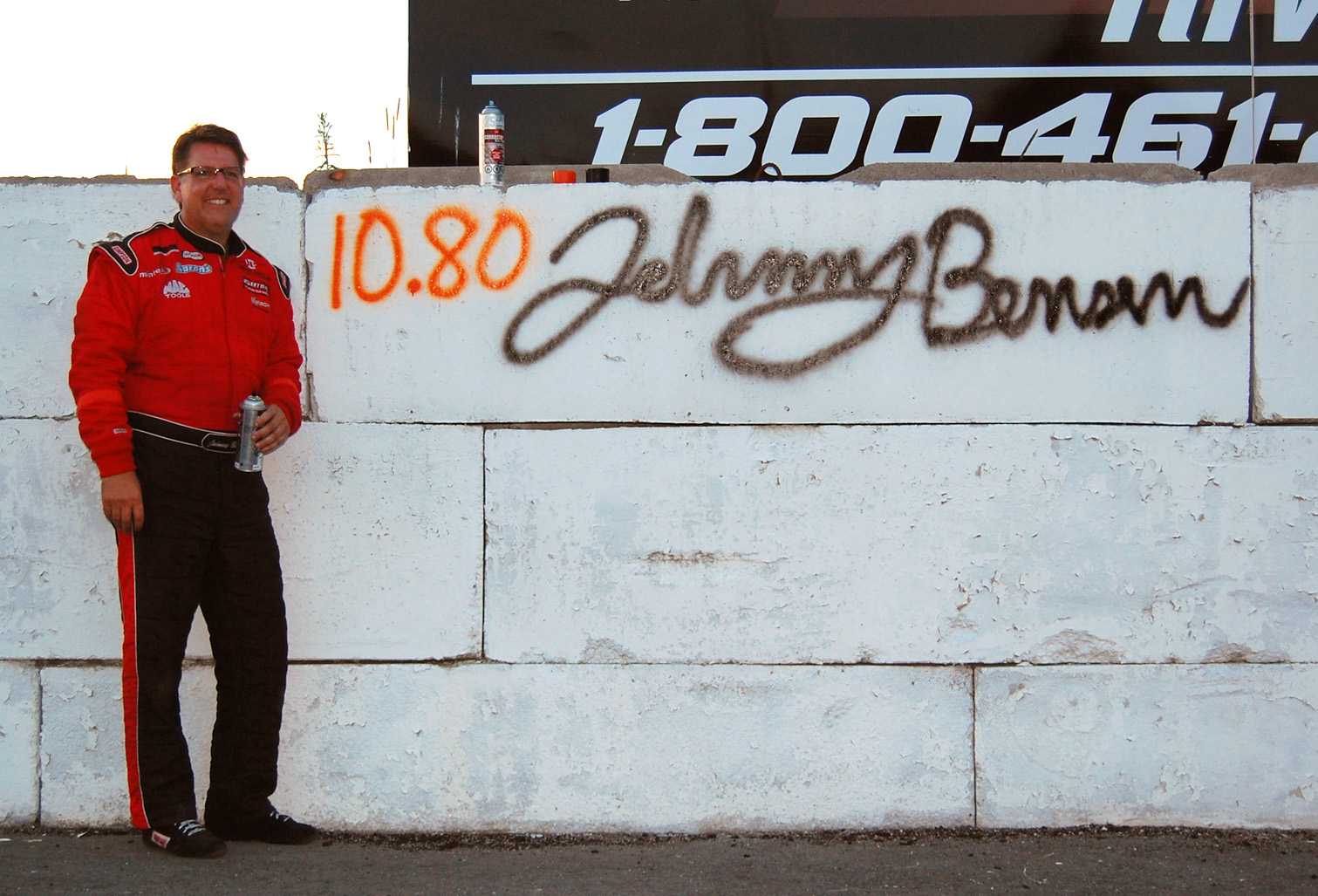 Vallee-Jonction, Quebec – Johnny Benson Jr. put on a show Saturday night for the Canadian fans who came out to watch the ultra fast ISMA cars for the very first time at their track. Benson set a new track record earlier in the day and painted his name on the Chaudiere wall much to the delight of the fans. The former NASCAR truck champion then went on to a convincing feature win on the banked third mile oval, taking the lead early from outside polesitter Jamie Timmons. It was the second career win for the Cornelius, NC driver and he had a bit of a battle with his PATCO teammate to make it even more exciting!

“Thanks to Brad and Mike Lichty and everybody on the PATCO Transportation for giving me this little hot rod here. Those guys do a great job. I love coming to race with ISMA and I love racing with these guys. And I love coming to a place like this and I hope the fans enjoyed the race. It’s pretty cool to set the track record here and then to win with Mike second.”

Lichty fought back from a lap 3 pit stop caused by a brush with another car, to finish second, closing on Benson after a late race caution bunched the field. “First I have to say hats off to Benson. Obviously it’s cool with my teammate and I being one-two. We had a good racecar at the beginning but got on the outside of a car and once again got ran into, which sent me to the pits. I started at the rear and worked back up to second. It was a fun race but it definitely took us a while to find speed in the car at this racetrack. Once we found it, it was definitely a fun track to race on. It’s difficult with the rumble strips on the bottom though. If you get in trouble, you don’t really have any place to go. For the first time here, I’m very impressed. I can’t thanks the fans enough for coming out today and to ISMA for putting on the show. Yep, one-two, that’s good.”

Rob Summers brought the Jeff Holbrook-owned 35 home in third after starting eighth in the field. He said in victory circle, “I thank all the fans out there for coming and to the track owner and officials for having us here. We loved coming to Quebec and this is a great little racetrack. We had a great time. I’d like to thank JWJ Industries, Port City Logistics, Jeff Holbrook, Brian Allegresso, Jerry, Russ Wood and the whole crew for giving me a good car tonight. Hopefully we can get the car a little better and win at Oswego on Friday.”

Dave Duggan and Jamie Timmons headed the field down to green in the 75-lapper but a lap three yellow for Lichty slowed things right away, with Lichty pitting and returning to the rear.

It only took sixth-place starter Benson a couple laps after the restart to catch and pass Jamie Timmons. He was never really headed after that.

Red fell for a blocked track shortly thereafter as Mark Sammut and Joey Scanlon brushed sending cars all around with Sammut hooked and Jeff Locke and Mike Lichty pitting. Sammut was the only no show on the green.

Dave Duggan bunched the field after a yellow for a simple spin on lap 27. Scanlon brought the 88 in and called out for the night on this slowdown.

Benson pulled away from Seitz in the next set of greens with Summers in third until a lap 32 yellow found Russ Wood and Jamie Timmons sitting the wrong way in the turn. A hook was called for Wood who did not return. Under the yellow the Vic Miller 11 driven by Vern Romanoski, stopped on the track and was pushed pitside. Vern said later that the pickup on the side tank was not transferring fuel, which caused him to call it a night.

It was all Benson for the next 20 laps as Lichty tried to catch his teammate but lap cars proved to be a impedance until into lap 73 when the Duggan 51 spun again giving Lichty one last chance as Duggan had been one of the lap cars who sat between the 74 and the 84. Ben Seitz, who had drifted back to fifth due to lack of fuel also pitted at this time but returned to pick up the tail.

Lichty applied the pressure as the final green dropped but to no avail. It was Benson under the checkers first with Lichty, Summers, Jeff Locke and Seitz the top five.

Locke was pleased with fourth. “We kind of salvaged what was kind of a rough race and came back to finish fourth. And, we kept it in one piece so we can get ready for Oswego. I’m happy with that. I really have to thank Richard Witkum and my father who gives me good equipment to work with. Richard works on the car every night. It’s unbelievable the time he spends on this car. That helps us run well. I’d also like to thank Shawmut Equipment who recently came onboard as a sponsor. Also thanks to Locke Crane Service and Glenn  Shanks Oil. We can’t do it without any of them. We had a lot of fun and we’re looking forward to the rest of the season.”

Seitz, finishing fifth even after his fuel shortage, said “We had a rough race. We were running second and I actually lost the front brakes. A bunch of guys got past us and I was just riding around after that. Then we ran out of fuel and we lost a spot to Locke. I can’t seem to catch a break here this year but we’ll get it eventually. I need to thank my car owner Dick Bien and my sponsors Cape Cod Aggregates, Sam Lorusso and his family and R&R Motors. The car has the speed this year, but we just can’t seem to put it all together and get the finish we are looking for. But, we’re putting it into the trailer in one piece. We’ll go on to this weekend and try again.”