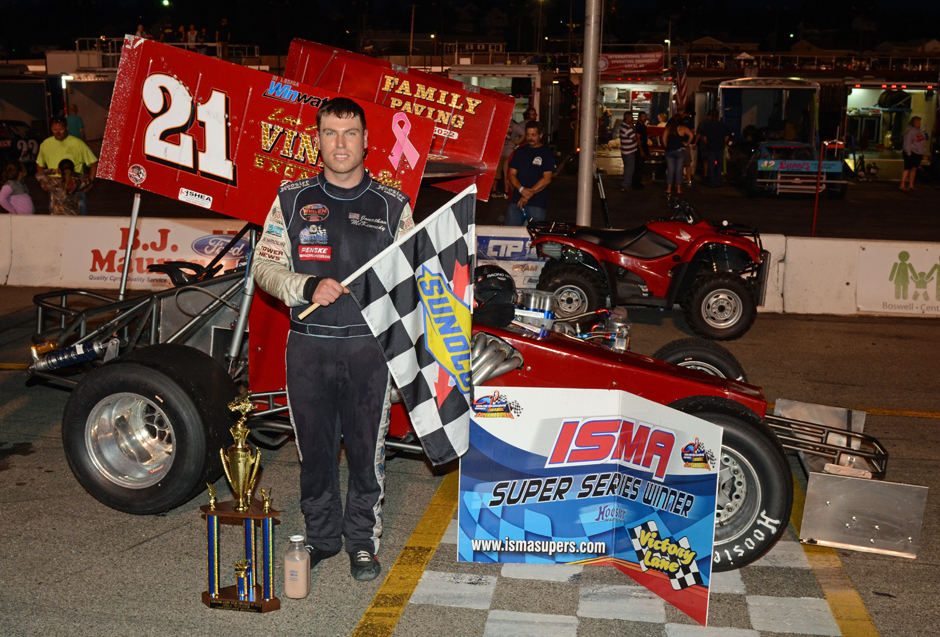 Jennerstown, PA – At the beginning of the 2017 ISMA race season, P&L Motorsports had found the new driver they had been looking for to run the Lee and Pam Vinal 21. The Vinals had campaigned a car on the ISMA circuit for over four years with several drivers, but had not picked up that elusive first win.

Chelmsford, Mass driver Jon McKennedy, who did not have a potential super ride for this year, had been the one asked to drive the car full-time in 2017. In a racing career that had spanned 20 years, Jon had competed in the winged supermodifieds for a number of years but only one or two were full-time seasons. The talented driver had built up an impressive resume in the asphalt modified divisions in New England with numerous wins and multi-championships to his credit. Along the way he had also accumulated seven ISMA feature wins, jumping into a competitive car on occasion when available and usually having success.

Saturday night at Jennerstown Speedway, Jon brought Pam and Lee their first victory, and his 8th career win. His success in many other racing divisions, especially the modified class is immense, his love of the supermodifieds is gigantic. Taking the lead from Dan Bowes, who is also looking for a first win, on lap 28, McKennedy would lead the rest of the way in the 50-lapper, fending off several challenges by Timmy Jedrzejek in the Lane Racing 97.

The race, sponsored by The Farmer’s Union CO-OP, powered by Milk, had a new-old tradition for McKennedy as he was given a bottle of chocolate milk to drink after his victory.

Jon then described his race and his admiration for his new team and the supermodifieds.

“I’ve been racing since I was a little kid and have driven a lot of race cars. Pretty much the supermodifieds are the ultimate race car. The only things faster probably would be an Indy car or a Formula 1 car. A super is a 2000 pound car with 900 horse. You can’t get much better than that. They are a blast to drive. It’s been an awesome day, an awesome night. I can’t thank the crew enough and Lee and Pam Vinyl for giving me the opportunity to drive this car. Also to Harrington Paving, Picard Construction, Neal’s Auto Body, Lee A. Vinal Inc., Lucky Oil Co.,and Gulbicki’s – all these guys who help out – it’s just a great deal. It’s great to finally get them their first win. They have been trying hard to get it the last few years. What an awesome night to win. It’s an awesome crowd and an awesome facility.

“I have to say I was getting a little nervous. I lost my power steering around lap 20 and I had my hands full. Every time the car slid I had a hand full trying to gather it up. But I had just enough to hold those guys off and win. It all worked out on this great night. I just want to thank everyone. Like I said it’s the first win for these guys and hopefully there will be more in the future. I think we also have the point lead so it’s off to Ohio for the Sandusky Hy-Miler, an event I won a few years ago. We have some momentum and now we have to ride the wave while we can.”

Timmy Jedrzejek, also with eight ISMA wins to his credit, got a jump on second running Bowes on a lap 31 restart to take the runner-up spot. Timmy closed in on the leader McKennedy for a few laps but soon he was able to pull away, leaving Jedrzejek to finish second.

“The good things for me tonight were the restarts. Even at the start of the race I could get real aggressive. After about six or eight laps in my car would start to slip a little bit and I’d have to settle into a zone. When the cautions came out I went into attack mode for about three laps because the car was really solid underneath me. Then again, I’d have to fall in. On that last restart I think I was third and I got up to second. I was able to get next to Jonathan then but I just couldn’t make the pass. He was much better on the long runs and he started to pull away as I had to ease off the gas a little because I was getting too free off the corners. You know I like this track and this style of racing better than the bullrings, but then I’m not used to those smaller tracks. I grew up at Sandusky and Oswego. Coming here today we had a really solid car. It was comfortable to drive and I really enjoyed it. But how about these fans out there and Jennerstown Speedway inviting us to come here? It makes it exciting for the teams and the drivers to look up and see the big crowd rooting for us to put on a good show. I hope we didn’t disappoint them.”

The crowd in turn acknowledged that there was no disappointment this night.

Leader for more than half the race, Dan Bowes, settled in for third although he admitted a miscue cost him a better finish. Bowes, the 2011 ISMA Rookie of the Year has a new car debuted late last year and he’s been knocking on the checkered door race by race. He acknowledged he had tried a little too hard trying to get that first win.

“The car was unbelievable out front. I really could do no wrong. I caught up to one lap car and got right by him but that other lap car I couldn’t. There was nothing he was doing wrong. He was just running his line which happened to kind of being where I needed to run. I tried to get around him a couple of laps. Then I got a little impatient thinking somebody was going to be breathing right down my neck soon. I needed to get by him. So I tried to get around him on the outside and I lost the air on my nose wing. I pushed up into the dirt and marbles. At that point I was heading straight for the wall. I got it slowed enough that I just bumped the right rear and I was able to keep going. Jonathan was able to get by. Then we had that restart shortly thereafter and Timmy just schooled me and just drove around me. After that I just worked at getting back by him but the time ran out. It was an unbelievable car but a little tight in traffic. I’m just going to work on that.”

Nineteen cars lined up for the green with Mike Ordway, Jr. sitting out the event after blowing a motor in practice. Bowes, who had set fast time in time trials, used his pole spot to grab the lead on lap two with Moe Lilje, McKennedy, Timmy J, Mike McVetta, defending race champ Mike Lichty, Chris Perley, ISMA point leader Ben Seitz and more look to move up and dethrone the young driver.

Bowes was lapping the tail cars by lap 8 when yellow flew on that same circuit for a spin by Larry Lehnert in the 92 who was able to restart.

Bowes took off and settled in out front a distance away from McKennedy, Jedrzejek, Moe Lilje and Lichty running top five. McVetta, Perley, Kyle Edwards, Trent Stephens and Mark Sammut racing closely behind.

On lap 26, Bowes was trying to pass the aforementioned slower car when he suddenly slid up the track and brushed the wall, continuing without a yellow. McKennedy, with Bowes lead having evaporated, got by to lead lap 29. Timmy J, Lilje, Lichty and Seitz were next in line.

Moe Lilje lost his fourth spot when the car stopped off turn two with a cloud of steam erupting from the 74 on lap 31. He was hooked out of the race and the track cleaned up from the fluids.

The race then resumed on the lap 31 restart. It was here Jedrzejek, a veteran with five MSA championships, 4 Oswego Super Nationals and 2 Sandusky Hy-Miler wins, “schooled” Bowes who now fell back to third.

The raced moved along quickly and with ten laps to go McKennedy had a commanding lead after Timmy J had made his three tries at the leader to no avail. The 97 and 25 kept at each other as Lichty, Seitz, McVetta and Perley were still trying to gain ground.

But it was clear sailing to that coveted win for the Vinal team as Jon passed under the checkers alone. Timmy J and Bowes were closer together in second and third while back a few car lengths were Lichty and Seitz rounding out the top five.

Fourth place finisher who had high hopes of a second straight Jennerstown win, was once again disappointed with his run.

Said Mike later in his pit, “A fourth place is definitely not what we wanted considering our performance last year. We have the same old story – tires. We missed them again greatly and we have no idea what we are doing with these tires. And the results show.”

Ben Seitz was already headed to his Bourne, Mass. home with the ISMA race finishing just past 9 pm

Completing the top ten were McVetta, Perley, Trent Stephens, Kyle Edwards and Mark Sammut. Alison Cumens, who was married in early June, was just out of the top ten on her first race of the season.