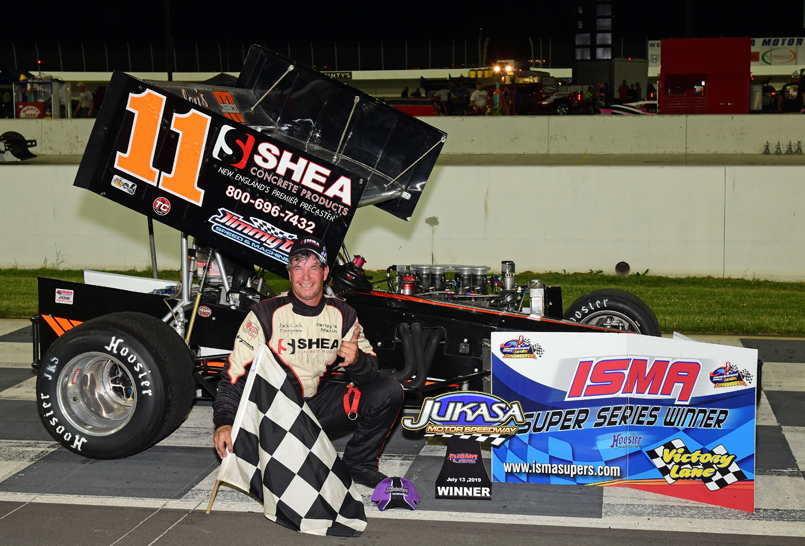 Hagersville, Ontario – The International SuperModified Association group has waited an inordinate amount of time getting their 2019 season started due mainly to weather, but the opener finally got in the books at the Jukasa Speedway Queenston Chevrolet 50 on Saturday.

Despite bad weather which surrounded the beautiful facility on all sides, perseverance prevailed and the racing went on. No one was probably happier than veteran driver Chris Perley. The Vic Miller crew had worked hard all winter to get the 11 back to working the way it once had been.

With little or no track time on the car prior to Saturday, the old “Rowley Rocket” appeared to have been resurrected. Both veteran fans and the popular driver knew it had all come back together. It was apparent as Perley brought the 11 to the front that the hard work had paid off. A late race challenge by Mike Lichty with 13 laps to go created an epic battle up front to the delight of the fans. Perley, whose first ISMA win came in 1995, who sits on top of the ISMA All-Time Feature win list, added one more tally to the total with the victory.

Said Perley in victory lane after his 74th ISMA feature win, “It’s been a long winter working on the car. The season is starting really late. And, we didn’t really get a chance to see where we were at. We just hoped we had it back to where it was before. Today the car was fast all day. Which hasn’t happened in a long time. At the beginning of the race I wasn’t sure what we really had. Midway through I knew we had a really good piece and if nothing broke, it would be a good night. Everyone was fast when the race started. Tires seemed to come into play near the middle of the race, but the 11 seemed to get better then on tires. So at the end of it I was just really, really cooling it and Mike snuck up on me. We had plenty to get away if he had tried on the last lap. It would have really been interesting. The car was great. The crew is great. And, especially Jukasa and the fans were great.”

Mike Lichty, who finished a close second after a bad start to his day, was pleased with how it ended. “It was fun for sure. And, from where we started out all day, I’ll take it. We had problems as soon as we unloaded. We had power steering issues, then fuel pump issues and only got about five laps of practice which they gave us just before heat race. But the car kept getting better and better. I didn’t start out the race that good but just kept picking my way through the field. I know Perley was conservative at the end but there just wasn’t an outside and I drove it in there real, real hard and got on the outside of him but he had the momentum down on the bottom. We’ll take second. I have to thank everybody, Reed’s Salvage, Craig Reed, everybody that puts an effort in here including my father and PATCO Transportation. We didn’t finish the car until about 2 o’clock this morning, so a big thanks to everybody on the crew. I also have to thank Corr/Pak, Eddie Shea and Hoosier and all the people who support us, and Jukasa Speedway for holding on despite the rain.”

Dan Bowes, who had earned his first ISMA feature win at Jukasa in 2018, ran almost 30 laps in second until Perley moved by. The Epping, NH driver however, was not displeased with a third. “I had a good day today. I just came up a little short. The car was just too tight. And, the two guys in front of me just had better cars than I did. I think we had probably a third place car and that’s what we got out of it today. Overall I’m happy with it. Obviously you always want to win but to travel this far, have a good run and have everything go smooth all day, I can’t really complain.”

Ben Seitz and Timmy Jedrzejek led the way to the ISMA opener green with Perley and Bowes right behind. Seitz held the lead for three laps before Ohio’s Timmy J took it at the line on lap 4.

Jedrzejek began pulling away from Seitz, Bowes, Perley, Ryan Coniam and Jon McKennedy but a yellow flew on lap 7 as 2018 ISMA champ Kyle Edwards spun. Both Edwards and McKennedy pitted and returned at the tail.

Timmy J took up his lead on the green with Bowes now in second trying to pick up win number two. A quick yellow flew on lap 12 when Dave McKnight slowed out of turn two and was limping to the pits.

The field bunched up for another restart with Jedrzejek holding the point over some hungry challengers behind in Bowes, Seitz, Perley, Coniam, Mike Ordway Jr., Lichty and Mark Sammut trying to move forward.

Ryan Coniam, whose dad Warren and grandfather Doug Syer are Canadian legends, had his debut in the Brad Lichty 74 ending on lap 19, while rookie Nick Cappelli’s 86 was parked it at this juncture also.

But as the halfway flag was displayed, Perley made his way by Seitz. The famed black and orange 11 was definitely on the move. On lap 31 Perley slid by Bowes who was still stuck to leader Jedrzejek.

Just as Perley had made a spectacular move by the 97 on lap 34, a yellow flew for the 1E of Edwards, negating the Perley pass and ending Kyle’s day. 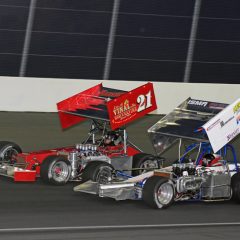 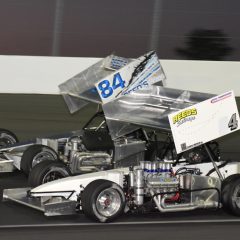 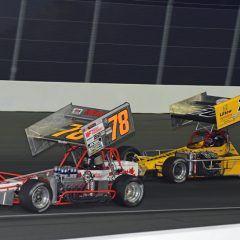 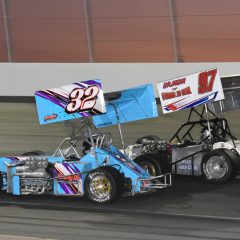 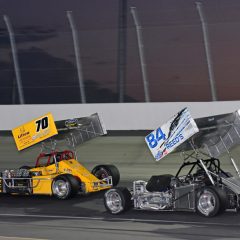 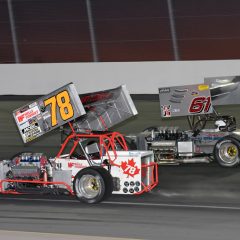 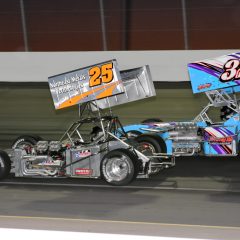 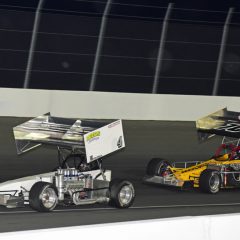 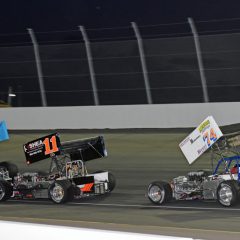 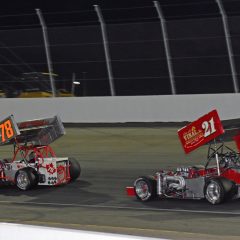 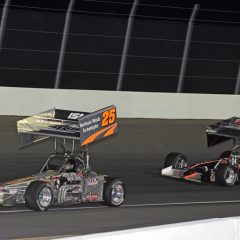 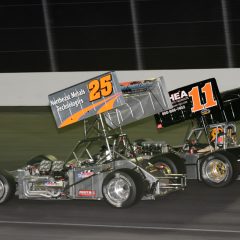 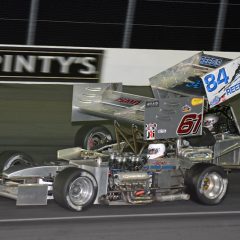 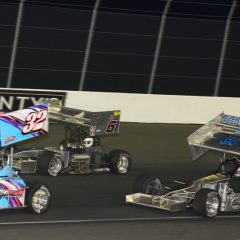 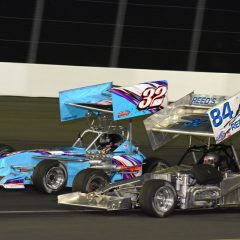 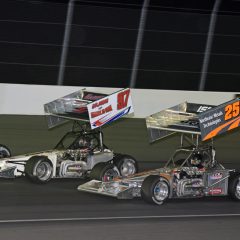 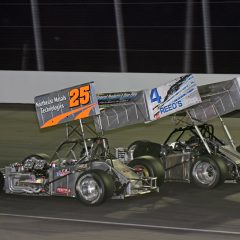 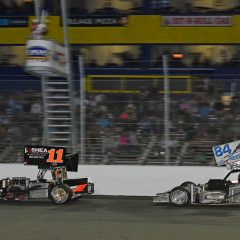 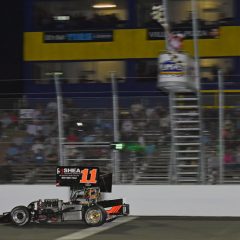 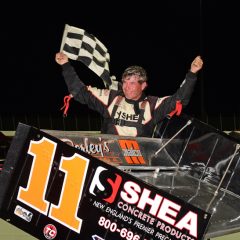 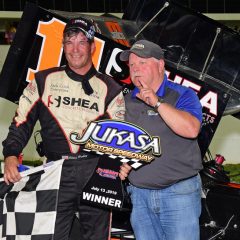 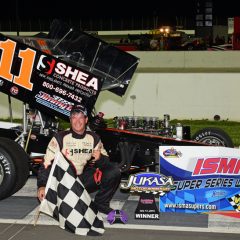 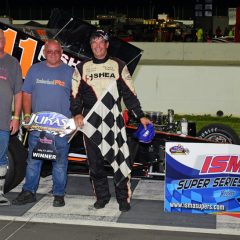 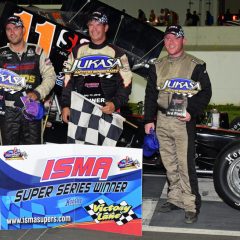 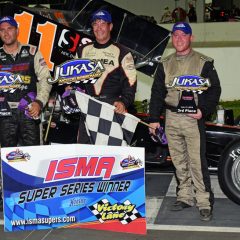 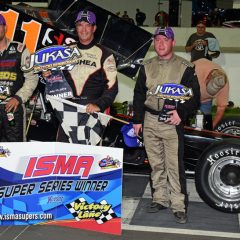 After the restart, it took Perley three laps to duplicate the maneuver around Jedrzejek and this time the lead was his. Timmy lost second to Bowes in the action while a new challenger came on the scene in Lichty. On lap 39 the 84 was coming alive and had moved into third as Perley held some distance out front.

With ten to go, Lichty put Bowes in third and headed for Perley. Lichty methodically decreased the distance out front that Perley had built up. With five laps to go, Lichty was intensely trying to get by the 11. With three laps to go, Lichty was alongside twice but the laps wore out before Lichty did, as Perley crossed the line for his second ever feature at the track that was once Cayuga Speedway. His other win there came in 2003. Bowes was third while Timmy J and Ben Seitz rounded out the top five. Lichty was awarded the Hard Charger bonus for his great run.

Jedrzejek, who led the most laps commented on his run. “It was a good day. It’s certainly a better day than what we had here last year when we ended up in the turn three wall with a broken suspension. Today was a good day. We led 30 laps or so. I felt like the car was pretty good and I also knew all the hot dogs were behind me. I just tried to maintain. But I got really tight after that last caution and there goes the 11, the 25 and 84 and I thought ‘oh man’ I have to get this thing back together. I had felt good running higher a little earlier, felt stable up there, but after that last caution I just couldn’t make it happen so I dropped to the bottom and the top three pulled away a little bit. I was just trying to protect my fourth spot, dropping down as far as I could. We’re rolling it onto the trailer and it’s a good way to start the season for the Doctor Mom Says School is Cool, Howie Lane crew. It’s off to Hy-Miler.”

Seitz, who ended the 2018 season with a Thompson Speedway ISMA win, was pleased with the 2019 season start. “So we had a good run tonight. The car was good in the middle of the race but kind of fell off towards the end. It’s disappointing as we were really fast in the practice and the heat. I was just trying to save some speed but we didn’t have it when we needed it. We’re loading the car up and I feel it’s a good piece this year. I have to thank Danny and the crew. They have done a lot of work this winter. So I’m excited to go to Sandusky.”

Mike Ordway Jr., Jon McKennedy, Moe Lilje, Rich Reid and Mike Ling rounded out the top ten. Reid, who had been involved in an MSS race wreck the previous week was thankful for a 9th and attributed his appearance to help from Jim Bodnar and Doug Edwards. Ling, a Canadian sprint car competitor, was piloting a second Mark Sammut owned machine for the first time.