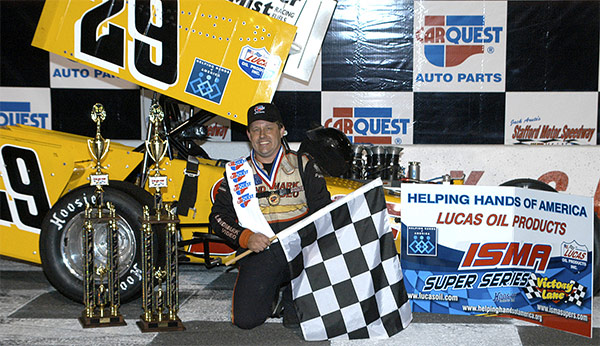 Stafford, CT – The event was billed as Xtreme Wednesday at Stafford Motor Speedway and Wednesday’s ISMA 50 lapper lived up to the hype. The eventual top five put on a series of battles worthy of the title classic. Russ Wood and Lou Cicconi waged a war for the top spot with Wood taking the point for good with less than ten to go. Behind, Pat Abold, Chris Perley and Joey Payne threaded in between lap cars to finish up the top five. For Wood, the win was his 47th career ISMA win (2 of them non-pointers) as he continues to top the All-time ISMA Lucas Oil-Helping Hands America win list. The combatants had the fans on their feet and their hearts pounding on more than one occasion as they watched the night’s finale, which followed a USAC hotshoe match race won by Ken Schrader.

Russ Wood, smiling broadly, commented after the win. “The car was awesome tonight. I had some wicked racing with Lou and Pat. I thought they were pretty strong. I thought they’d be there at the end but my car was getting better. It was flawless. The traffic all went my way. It was a good win for the car and the team. The crew worked hard. They made a few changes today. We’re extremely happy. “

Louie Cicconi, who ended the race in second, had stopped his 75 off the backstretch after the checkered jumping from the car as it spewed hot fluid. He was sporting a cold pack and bandage as his car passed over the scales. “It was an awesome race. Something in the motor or a water line broke at the end. I think I did a good job getting out quick. I only got a little burn spot on my arm. I had a lot of water on my legs but no burns. Thank God. Russ and I were battling like there was a war going on. It was so clean. There’s a lot of respect between us and he earned that win. I wasn’t giving it to him. He earned it fair and square. I’m happy for him. There was a lot of traffic there and it was fun to race through. I’ll tell you if it weren’t for Brian (Allegresso) I wouldn’t be out there tonight. He fixed my racecar for me. It broke in the trailer on the way to the track. We opened the trailer when we got here and it was on the ground. The shock towers had broken off it. Brian fixed it. If it weren’t for him I wouldn’t have been out there.”

ISMA point leader Pat Abold who has posted an admirable record to date was also pleased to take home a second top three for the Dunigan team. “Third place is a good run. The team had a good run tonight. I’m really happy for Russell. Those guys needed that. We got a little bit tight in the middle of the corner. Third helped us a little in the points. We just have to keep good consistent finishes and keep as competitive as we are. It was a lot of fun racing out there tonight.”

Twenty-nine ISMA cars vied for a chance at running for the huge crowd on hand with Abold, Joe Petro and Jon McKennedy taking heats and Ricky Wentworth copping the consi.

A quick yellow on the first lap came for a spin by Johnny Payne and with the race resumption, polesitter Justin Belfiore took off from the pack. Lou Cicconi rapidly moved his brightly colored 75 into second and it was obvious that Lou was fast and smooth. On lap 6 Lou drove outside Belfiore off turn three for the lead. But the excitement was just beginning.

A second yellow fell on lap 8 as the steering broke on the Bob Magner-driven 35. This put the line right of Belfiore, Scott Martel, Mark Sammut, Mike Lichty and Abold right on Lou’s tail. But Cicconi began to pull away from Belfiore. On lap 21 a high-flying Pat Abold took over second from Justin as his teammate Russ Wood did likewise for third. Chris Perley, driving high and low, pulled into fourth a couple laps later with Lichty, Joey Payne, Belfiore, Martel, Sammut and McKennedy still racing hard toward the front as the race approached half way.

A final yellow for debris on lap 20 allowed the field to bunch back behind Cicconi.

After the restart, slowly but surely Wood made up the distance Cicconi had acquired and by lap 29 the fans knew a breath-taking battle was coming. With lap cars in front and Abold, Perley and Joey Payne behind, Cicconi and Wood began their run to the checkered maneuvering in and out of the fast moving lap cars. On lap 40, Wood dove low as the duo approached Jamie Letcher and Bobby Santos with Lou mired for a moment. Wood came across the line in the lead as the board clicked to 41. He was nine laps away from his first win of the season and he wasn’t about to lose this one.

A couple lap cars soon separated Wood’s 29 from Cicconi while Abold, Perley and Joey Payne still fought their own fight for the next spot. Joe Petro moved up to sixth in a late race charge while Lichty and Martel diced behind. With very little attrition in the field, racing continued all over the track right to the checkered which Wood passed under comfortably in first. Cicconi came off turn two and pulled into the grass with the aforementioned fluid spitting on him. The track crew tended to Lou and eventually he made his way to victory lane to join Wood and Abold for the podium finish.

Perley, trying to make up a disappointing season start, settled for the fourth. “It was a tough race. To come out with fourth is good. We were battling good people through and through – Joey behind me, Pat in front of me. And Louie. There was a lot of traffic but the car was off and we made the best of it. Stafford does appear to be a fun track to race at because it gives you different grooves. After we put on new tires for the heat, the car just got greasy. It didn’t have the bite that it had and it kept that greasy feel for the whole feature. We were tight and loose at the end but a lot of people were having the same problem except for Woody who had checked out. Congratulations to him. We wanted to get Lou and Pat but we’ll have to wait until next time.”

And Joey Payne in his best ISMA finish to date and after a disappointing midget run, said, “It’s been a rough night. We wore the midget out…killed that thing. It feels good to come home fifth in the super for a low buck team. We were coming. I clogged the fuel filters again. We’ve been having problems with fuel all night long and the car wouldn’t pull off the corners. I just had to drive the crap out of it to get it in behind those guys. I almost had Chris at the end but he’s going for the championship so I didn’t want to screw him up so we settled for fifth and we’re looking forward to Cayuga.”

Petro, Martel, Lichty McKennedy and McKnight rounded out the top ten. Two USAC drivers Paul White and Brad Noffsinger tried their hands in the supers and Connecticut’s Ted Christopher was once again aboard a Lane-owned car where he finished eleventh.

ISMA heads to north of the border to Cayuga Speedway on July 16.