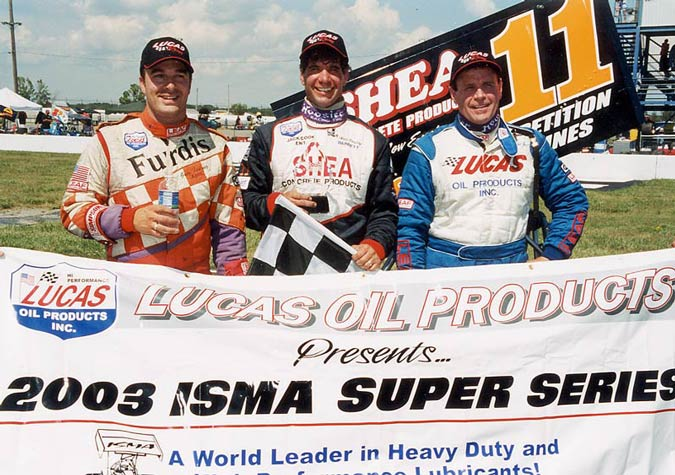 Nelles Corners, Ont.- Chris Perley ended Russ Wood’s 3-feature win streak Sunday at Cayuga Speedway by easily taking the 50 lap ISMA-Lucas Oil event which had been rained out the previous night. Perley, starting eleventh in the 23-car field, passed race leader Brad Lichty on lap 23 and was soon out of sight. A late race caution allowed Greg Furlong and Dave McKnight to gain some ground on the “Rowley Rocket” but time ran out before either could mount a serious challenge. The $3,200 win, coupled with an eighth place finish by Russ Wood, put Perley within a half dozen points of the ISMA point leader five races into the season. Donning a rather atypical race hat all day which received many comments, Perley was smiling smugly after his first victory of the 2003 season.

Said the driver of the Vic Miller 11 in victory lane, “The car was great. We just got up through before everybody else did. Everyone seemed to loosen up there toward the end. I just kind of wanted to run away. That caution with five to go – you never know what is going to happen. It was great. Everybody on the team worked hard. I’d like to thank my sponsors: E.F. Shea Concrete, R&R Engines, Perley’s Marina, NEMRS, Barrett’s Transportation, Jack Cook Enterprises and Hardy Transportation. It’s really all to do with the hat. It’s my lucky, idiot-boy hat. I may have to start selling them.”

In what was admittedly a big bonzai move off turn four of the checkered flag lap, Dave McKnight was almost sideways as he took second from Greg Furlong. Dave admitted it was an exciting move. “What can I say? The Lucas Oil number 94 did a great job today. All the guys worked hard. We were off a little on the setup. We’re coming back. Russell finished back and everybody gained a little in points. So we’ll go to Sandusky and see how it goes. Hats off to Chris Perley. He did a good job. I think we had something for him at the end but we were just too far back. It was exciting for the fans and I’m happy for the team.”

Third place finisher Furlong, who had run second for almost 20 laps, commented, “In the beginning we had an awesome car. But, a caution came out and I tapped Brad Lichty as he slowed and the right front nose wing came off. It just made me off after that. Under the circumstances, we’ll take third. This was a great finish for not having part of the nose wing. The guys did a great job on the car today. I honestly think with the wing intact we could have done better. I had gotten from seventh to second in just six-seven laps before that happened on lap eight.. I think I had a great car, maybe the best I’ve had this year and maybe as good as since Kawartha last year. It’s just unfortunate we lost that wing. I’m not saying we would have beat Perley, but I’m pretty certain if I had gotten in front of him he would not have gotten back by. But, it’s part of racing.”

Attrition started too early in the day when in warm-ups, Lou Cicconi tangled with Rod Sauder, putting both out of the race before the heats began. After, heats were won by Mark Sammut, Joe Gosek, in the Howie Lane 97, and Bentley Warren, a 24-car field was established. But, just prior to the start, Ken Bell’s 32 was scratched due to a faulty motor.

Brad Lichty had the pole and the lead as the green fell on the 23 ISMA-Lucas Oil supers. Moving quickly up was Greg Furlong who was by Jamie Timmons for second, but a lap eight yellow for Denny Fisher and an errant radiator hose, found Furlong tagging the slowing leader Lichty. On the restart, it was Lichty, Timmons, Furlong, Joe Gosek and Mark Sammut in the top five.Moving up through the field was Perley who was by Sammut for fifth by lap 14. Picking his way forward, Perley was up to third by lap 19 and had only Timmons and Lichty ahead of him. Making it look easy, Perley was by first Timmons and then drove by Lichty out of turn three on lap 23. By the midway mark he had a two-lap car cushion to his credit.

Jamie Timmons put his 27 in second on lap 27, but soon thereafter slid low on the track and pitted out of the action, leaving Lichty, Furlong and McKnight to try and make a run at Perley. Chris was lapping at will as Furlong, McKnight, Gosek and Lichty tried to keep him in sight.

With less than ten to go, Perley was about to put point leader Wood down a marker, but several laps later, a yellow flew for a simple spin by the 16 of Jim Shirey which saved Wood from losing a lap. With one to go, Perley was home free but second place runner Greg Furlong was about to lose his spot as Dave McKnight was bound and determined to take it. Giving it his all, McKnight slid by the 72 off turn four as Perley was already on his victory lap.

Furlong ended up in third with Gosek and Lichty in the top five. Randy Ritskes, Timmy Jedrzejek, Russ Wood and Jim Shirey finished up the top ten.

The next ISMA-Lucas Oil Super Series outing is a two-day stint at Sandusky with a big $10,000 to win payday for the Saturday night Hy-Miler Nationals on July 26.