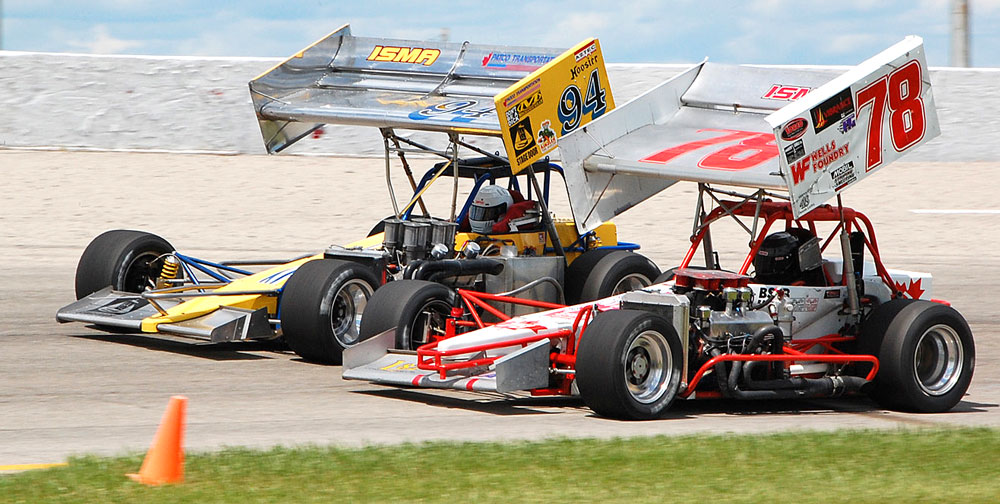 Nelles Corners, ON – After approximately 11 years of trying, London, Ontario’s Mark Sammut was finally able to notch his first-ever career win in ISMA and he did it in front of a Canadian crowd of well-wishers. It was perfect end to what might have been a less than perfect day at the Cayuga Int’l Speedway that saw a rather sparse turnout of cars for what was for some of the competitors, a third race in six days. Sammut started tenth in the short but strong fifteen car field and worked his way up to second by lap 31. He then had to figure out his way around a strong-running Ben Seitz in the Budnick 88 with less than 20 laps to go.

Sammut commented on his trip to the front. “Seitz was running a great line. He was going in deeper than I was so I couldn’t get beside him going in. He was a little bit slower in the center. That’s the only place I had anything for him. I watched him for quite a few laps trying to find a hole. I didn’t see anything that was going to work out very good. I knew I had to wait my turn and when he went up high enough I’d try and get in there. I did and it worked out and luckily I made it through.

He continued, “The car was unbelievable in the feature. In the heat race we were a little bit off so we changed things around. Obviously it was the way to go. The car wasn’t perfect but we were as good as everybody else. So we finally got the job done. I’d like to thank Currie Steel and Erecting. They have been with us since day one with the three-quarter midgets. Wells Foundry and Mobile Striping and Sweeping. They are biggest 3 backers by far. If it weren’t for those three I wouldn’t be here at all. I have to say a big thank you to them. I have to thank my family for putting up with this all summer long. We work day and night on the racecar and go up and down the road all weekend. I appreciate them for supporting me too. It’s been great.

Ben Seitz, who has just joined ISMA as a full-time driver this season, led the 50 lapper from lap 20 on after leader Michael Barnes dropped out of the event with a broken panhard bolt. Said the Bourne, Mass. driver in victory lane. “We had an excellent run. The car was great. Bruce put a good setup on it. The motor was running really good. I have to thank Shea Concrete for helping out. We came up just a little bit short today. The car loosened up, especially in the last ten laps. It was still a really good run. Mark stuck his nose in going into three. I gave him room. I didn’t want to wreck. I gave him just enough and we were rubbing going into one but I just gave him enough room, but not too much, and he got by.”

Three car owner and driver of one, Jeff Holbrook, topped his two teammates with a third place finish. “I was actually very loose at the start of the race. I thought about coming in and tightening the car up, but I didn’t. Then I was afraid I was going to run out of fuel. The rear cell isn’t working so we ran the whole race off the side cell and we didn’t run out. I’m just glad to see that Mark was able to win a race in his own country. That’s nice. I think my teammates Russ (Wood) and Bobby (Magner) finished not far behind me, so that’s makes for good finishes. We’re happy.”

Strong, Maine driver Vern Romanoski took off in the early lead from the outside front row and quickly built up a considerable lead. Michael Barnes in the Morton 70 who was trailed closely by Seitz and Holbrook chased Romanoski. Working on up were Dave McKnight, Mike Lichty, Mark Sammut, Bob Magner and Chris Perley.

Unfortunately for Romanoski, his lead was short-lived as the driveshaft went on his car setting up an early exit on lap 15.

Taking command now was Barnes and he too was able to pull away from the pack until the first race caution flew on lap 19 for the 84 of Lichty who had slowed and stopped on the backstretch. While his car was being attended to, Chris Perley, Russ Wood and Mike Ordway Sr., driving the Lane 97, all pitted for adjustments. Ordway would not continue while the others picked up at the tail of the field. Just before the race could resume, Barnes quickly exited the track with a broken panhard bar bolt.

It was now Seitz’ turn to lead and he accepted the challenge with vigor, taking off like a shot, trailed by Holbrook, McKnight, Sammut, Magner and Wood.

At the midway mark, it was still Seitz out front with Holbrook, McKnight, Sammut and Magner, the top five, followed by Russ Wood and Chris Perley.

Sammut was a patient man on the move. By lap 31 he was second, passing by Holbrook. Lap after lap he tried to set up a pass on Sietz, but had to wait as the lead duo pulled away from the field.

With ten to go, the Canadian was tucked right on the bumper of the 88 and within three laps he made his move. Coming into the first turn, side-by-side, with dirt flying from the edge of the infield, Sammut was able to get under the 88 for the lead. Running a distance behind in third was Holbrook with Russ Wood right behind, followed by McKnight, Perley and Magner. Unfortunately for Wood, he had passed a little too early on the last caution and would not be scored where he was running.

In the few laps that remained, Sammut was able to put a couple slower cars in between his 78 and the runner-up Seitz, before picking up the checkered as loud cheers erupted from the grandstands. Seitz stayed in second, Holbrook third, and with Wood’s penalty, Perley and McKnight moved into the top five.

Perley, who came into Cayuga with a win and a fifth in five days, picked up an uneventful fourth. He commented later, “It was an odd weekend to say the least. I think it was great that Sammut won his first race in Canada. I think that is awesome. I think it’s awesome that Seitz had a second and that Holbrook had a third. It was the best top three you could ask for with a limited car count.”

He laughed and continued, “Nobody wanted to see me win anyway. So that’s why I didn’t. I just backed off. No really, the car was good all day and then off for the feature. I pitted early because we were so loose and with not many cars I figured we could fix it. They tightened up a lot and changed the stagger a bit and changed diagonal. I don’t know when the wing broke. It was probably from going through sideways. It was an interesting battle with Woody, Lichty, McKnight and whoever else we raced with. If we raced all alone, we were a lot faster. But I couldn’t do anything when I was racing with someone.”

Canadian McKnight, whose luck had not been auspicious during the same time frame, said, “It was a strong run considering what we’ve had to deal with lately. We are just down on power a little bit. We hurt a good motor at Stafford. All in all we’re in one piece and we’ve finished for a change. We’ll work on it, build on it and see what happens at Sandusky.”