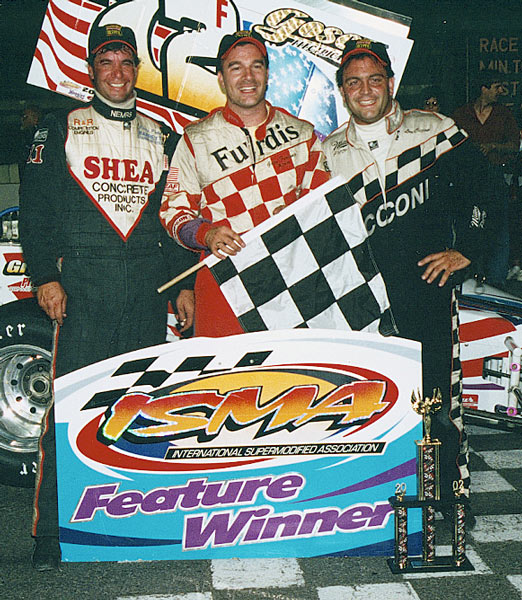 Peterborough, Ont. – 2001 Oswego champion Greg Furlong decided over the winter to try something different in 2002. He strapped on a wing and went ISMA racing. Until Friday night he had had only one finish to date, and that was a sixth at Seekonk in May. Kawartha Speedway’s ISMA 75 July 12 changed things dramatically for the Hannibal, NY driver who was used to winning some races. Furlong charged from the outside front row at the green and less than 20 minutes later he stood in victory lane after completely dominating the entire caution-less event. At race end, Furlong had driven up behind fourth place finisher Joe Gosek, having put the rest of the field down at least one marker. The win was worth $3,000 to the Furlong team, but much more as a morale-booster.

Furlong was ecstatic in victory lane as he spoke before the almost-packed house of 5,000-plus fans. “The car was just awesome,” said Greg. We kind of guessed what to do. The car was tight in the heat, but we knew the car was going to loosen up. We tightened it up a little bit more. We hit the stagger and everything. The car was just perfect. I couldn’t ask for more. The car was just a rocket. It started loosening up a little toward the end. Perfect – awesome. I was just comfortable out there. The only thing that held me up was lap traffic. The car was smooth. I was just driving around. At the end it wanted to skate up a little. It’s the best car I’ve had in a long, long, long time. The crew did a great job. This is my first ISMA win – my first podium finish.”

Way back behind Furlong’s flying 72, racing for second and third, were Lou Cicconi and Chris Perley. Lou wasn’t sure where Furlong was during much of the race and even Perley thought Lou was first when the checkered fell. Said Lou in regard to the fast-paced 75 lapper. “It was a good race. We needed a yellow. I knew Furlong was the only guy I didn’t pass. I couldn’t see him. He was exactly a half lap ahead of me. I wasn’t sure where he was. I looked in the infield to see if I could see his car, but I couldn’t turn my head around that much. He did a good job. He earned the win. “Perley laughed when asked about his third place. “I forgot all about Greg. I honestly thought Louie had won it. I even gave him the congratulations after the race. I thought I finished second. I’m happy with third though. Hats off to Greg. Hats off to Liquid Lou. I’m psyched. We had a good run. A caution-free race. It was good for the fans. I would have liked to see a caution to bunch it up, but I’m psyched. Another good run. We’re looking for those good runs. We’ll see what happens tomorrow.”

Furlong, after a strong heat win, grabbed the lead from the beginning of the race and put the car on cruise. Howie Lane stuck with Furlong for a while as Brad Lichty, Scott Martel and Dave McKnight shuffled behind. Early exits came for the 16 of Jim Shirey and the 76 driven by Doug Kells, whose 38 had blown a motor in warm-ups. The rest of the field were left to the mercy of Furlong’s expert ride.Furlong was putting cars down laps by lap 13 and many more would fall before the rapid race was over.

Moving up from 9th was Lou Cicconi while Joe Gosek, who started next to Cicconi. slid backwards after a miscue. Gosek explained later, after finishing fourth. “This is a tough place to pass, said Gosek,. “Greg started up front and I lost it about the tenth or fifteenth lap, maybe before that. I lost all the spots to the guys you have to race with and then with no cautions. At the end I think were as fast as Greg and even we’d had a caution, I think we could have raced with him. When you get behind on a short track in a long race things like that happen. I was fourth and he was right behind me. After loosing it there and muscling our way back to fourth, we’ll take fourth as a good finish.”

Moving up through the pack was Perley, who led the Canada-Midwest Region in ISMA points heading into the race. By lap 50, Furlong was out of sight of Cicconi, but Perley had Cicconi in his sights by this time and the two took up the battle for second. Russ Wood, Joe Gosek and Brad Lichty were top five at this juncture.

Howie Lane’s 97 failed him after a good run and on lap 56, Lane pulled low and pitside, saving a caution by so doing.

On lap 62, Furlong’s domination continued over the 3/8th’s high-banked oval as he approached fourth and fifth place runners Wood and Gosek. In the waning laps, as Gosek and Wood came up on a slower car themselves, Furlong dove past Wood leaving only Cicconi, Perley and Gosek in the same lap as he was as the checkered fell.

Cicconi and Perley fought to the finish for second while Gosek and Wood completed the top five.

Wood pretty much summarized the effectiveness of the magnificent run by Furlong. “Well we finished fifth. We could have used a yellow. The car got a little looser than I wanted. With those guys starting up front, they ran away. There wasn’t much we could do.”