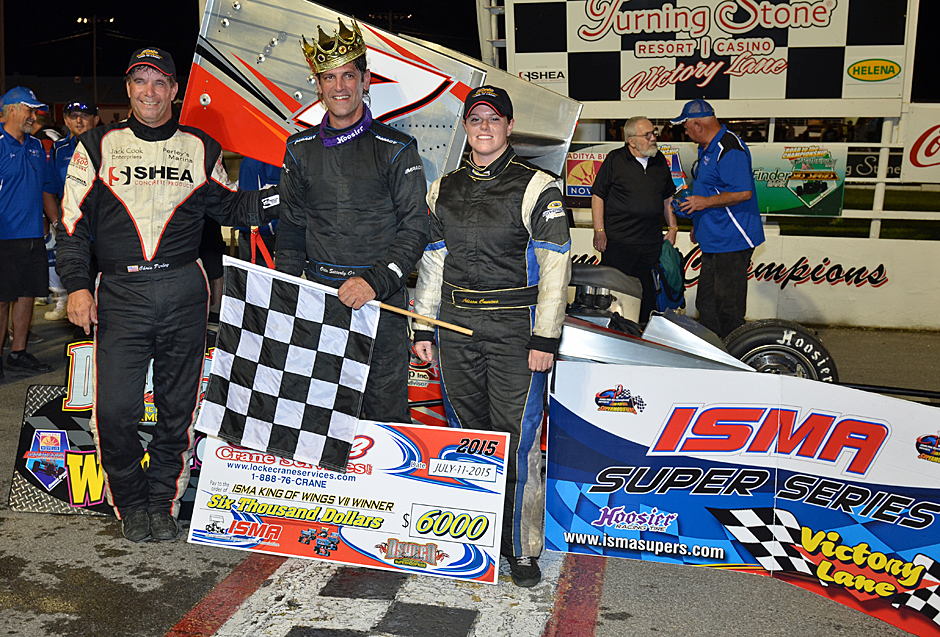 Oswego, NY – Canajoharie’s Otto Sitterly has won many features, a number of championships and Classics, at Oswego Speedway, but the one title that alluded him until Saturday night, was the King of Wings. This was primarily due to the fact that he was not a regular winged supermodified driver. But that all changed when he teamed, last year, with Dave Shullick Jr. and the Bodnar team based in Ohio. Shullick had accumulated quite a list of accomplishments in his career, but his came with a wing strapped on his potent supermodified. The goal became that each talented driver switch roles. Otto wanted to win in a winged car and Shullick in a non-winged car and the quest began. At the 50-lap King of Wings VII Sitterly notched his first winged win with relative ease. He started on the pole and led every lap, pretty much without any serious challenge.

Standing in front of a large crowd of fans, some not exactly in favor of his victory, Sitterly acknowledged the sentiments, unruffled by some of the negativity. “I want to thank you guys for booing. I appreciate that,” Sitterly started out his interview. “I must be doing something right. This is an awesome race car. I want to take it home to my garage. Every time I have gotten in it I like it more and more. I don’t know what to say. I have a lot of people to thank. Obviously one is Jim Bodnar, his wife Jan, DJ Shullick and his dad, and John Nicotra. It takes a lot of work to put one car together and we’ve got three, four cars. It’s a lot of work. We’re trying to help work on different ones and this is a sure way right here.”

When asked about working by the lap cars, Otto stated. “The car is really good, but it seems like when you get out of the groove a little bit and being behind another car, it takes a lot of downforce out. It lightens up and you can definitely feel it. But these are such great race cars that it’s an honor to drive with these guys. Our next goal is to have DJ Shullick standing right here with no wing on top.”

Standing in victory lane was Alison Cumens, who started next to Otto up front and held her ground the entire distance to finish second. It had to be a great feeling for the Pennsylvania driver who has had some bad luck of late and who now is undoubtedly the highest finishing female in an Oswego feature to date. Alison noted after her run, “I was having a bit of a fuel issue on the backstretch. I was kind of chugging before I could get going. So I was struggling a bit on the restarts because of that fuel issue. But other than that I had a really great car. Once I could get going the car was perfect. I’ve had 3 or 4 podium finishes with ISMA, but this is the first here. I wish I could get the win but it will come at some point.”

Chris Perley, not a stranger to podium finishes or victory lane at Oswego, hounded Cumen’s 39 throughout the race, “My car actually was pretty good. Alison had a fuel pump problem or something. She would just burp a little on the starts and that would bring me right up on her. But then she could take off. My car was terrible on restarts, but good on long runs. It was a decent run. We have just been chasing these tires. The tires are different than what we used to have. We could start in 12th or 15th and charge up through. You are not seeing that anymore. I’d like to put on a better show for the fans rather than to see the top four or five finish where they start. It’s frustrating in the driver’s seat. But we’ll keep on plugging away and see what we can do. Hats off to Otto and Alison. This was a good top three finish for us. We needed it. We’re always looking for more and we’ll be back for the next one.”

Sitterly, in the Bodnar 7 and Cumens led the 26-car field down to green and it was Sitterly who grabbed the point, never to relinquish the spot. Several cars dropped by the wayside early as Brian Sobus in the Gillingham 5, Tim Devendorf, Mike McVetta and Jon McKennedy all pitted prior to lap 10. McKennedy’s exit smoking brought out the first yellow for a fluid cleanup.

Otto took off on the restart green as Perley tried the get around Cumens to no avail and he settled back into third. Danny Shirey, Ryan Coniam, Timmy Jedrzejek, Ben Seitz, Dave Shullick Jr, Mike Lichty and Eddie Witkum Jr. ran top ten at this juncture and stayed pretty much in that order through lap 20 until another yellow flew as AJ Bernys brought the Gilliam 87 into the pits. Rob Summers and Bob Magner also made stops and returned to the tail of the field.

The restart of this lap saw a yellow-red condition as a melee broke out in turn two with Rob Summers’s 74 hauled in on the flatbed, Joe Gosek’s 00 on the hook, Lou LeVea Jr. on the hook and Dave McKnight coming in with some fluid leaking. Gosek and McKnight reentered the fray while Summers, Bob Magner and Lou LeVea Jr. called it a night.

Sitterly did not waste any time when the race resumed and he was back to a healthy lead in no time. Cumens, regained her strong second after her car made its burp. Perley, Shirey, Jedrzejek, Coniam and Seitz were joined by Lichty, Shullick, Witkum and Tim Ice in the top 11.

Sitterly passed under the halfway mark and was putting back runners down a lap by the 30th circuit.

Lap 31 saw another yellow fly as Ryan Coniam’s 46 was planted in the foam between 3 and 4 and he was on the hook and into the pits.

Deja vu continued as Sitterly took off, Cumens bogged, Perley caught up, then Alison’s car came alive and off they went. Shirey and Jedrzejek stayed in the top five as the race now went green to the end. Lichty, Seitz, Shullick, Witkum and Ice formed the top ten until on lap 38 Ice slowed and left the track with Jeff Locke moving up to take the spot.

Otto had his winged victory in sight now and he sped away quickly to fulfill his dream. Cumens, Perley, Shirey and Timmy J, stayed top five with Lichty, Seitz, Witkum, Shullick and Locke the top ten.

For second generation driver Danny Shirey, fourth was a career best at Oswego. “This is one of my best runs yet in ISMA. The car started to get a little tight towards the end. Perley was leaving the door open out of four and I could run up to him but just didn’t have enough to get around him. The starts that Otto was pulling on the backstretch was a little difficult to put up with. ISMA has gotten me but they didn’t say anything to him. I can’t thank the ACME crew enough. Steve and Rich put a good car under me. We struggled through qualifying but made up for it in the heat race. And, I ended up with a nice top four run. Now we’re ready for Hy-Miler.”

For Jedrzejek, who won the June 13 ISMA event, a fifth was what he kind of expected this night. “We started eighth tonight and finished fifth. I’m happy. I think we finished about where our car was going to finish tonight. We were about a fifth place car. There are just so many fast cars here. It is not a cakewalk back there. We see every week that it’s not easy to come from the back. We got to fifth. Our car wasn’t the best but it wasn’t bad. We’ll take it. Hats off to Howie Lane and the whole Doctor Mom School is Cool team. We had a good night. It’s in once piece. All the parts are on it and it’s rolling in the trailer. We’ll just get ready for the Hy-Miler in a couple weeks and go from there.”