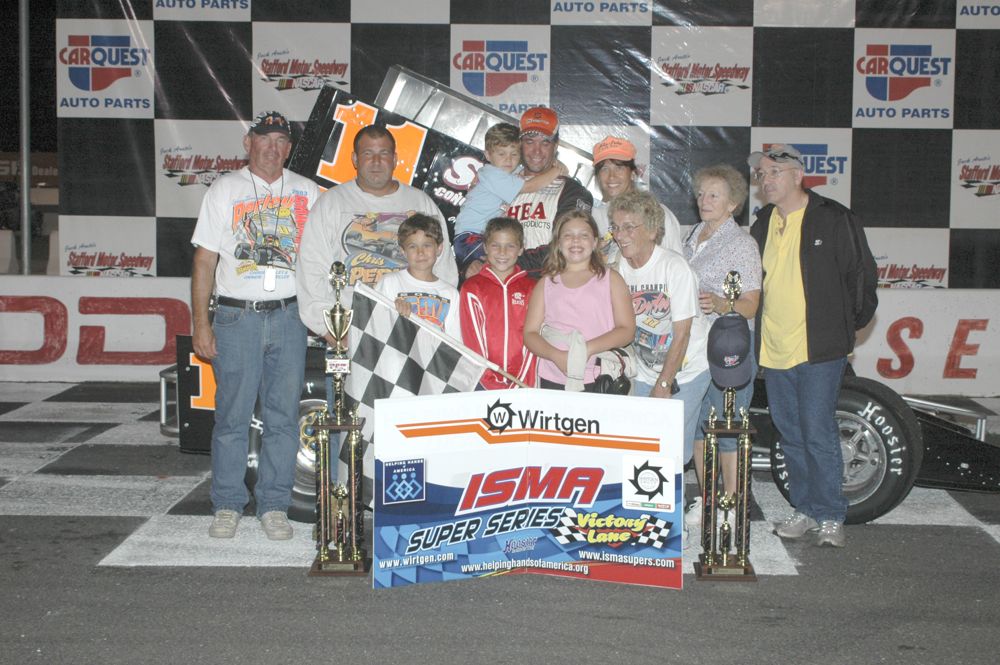 Stafford Springs, CT – Neither thunder or neither lightning nor a broken shock could stop the Rowley Rocket Chris Perley Tuesday night at Stafford. He continued on to a four-feature win streak in ISMA-Wirtgen competition despite some glitches in his car and some tough foes trying to dethrone him. In six ISMA events to date, Perley has had four wins and two dnfs and now sits atop the Wirtgen-ISMA point standings with some breathing room.

Perley described his race and his battle with Lou Cicconi. “I won again. It was an awesome race. We started off real slow. I didn’t know if the car was going to get going. And, then it just started coming around. I ended up running the bottom. I never run the bottom. That was the only place I could run. It was loose up top. I passed a couple cars. I seemed to have to race everybody I came up to really hard. That’s what made it a great race for the fans and me.”

Not evident from the stands was the fact that Perley was driving with a broken shock. “When I got up to either second or third I went into turn three and we were starting to get a lot of lift as the fuel load went down. It turned out the right rear shock broke in half. It got hung up on the chassis. I went through the corner and the chassis never dropped. It was like suspending the rear end of the chassis. All of a sudden the car started hopping. I didn’t know if I’d broken an axle or what. I dropped off five or ten car lengths. It’s funny. At Jennerstown I bent a shock and I felt it immediately. I didn’t know what it was. Today I broke the shock and I figured out what it was. I went down the next straight away, it felt different, but then okay. Every five laps it might do it again and I didn’t know when, I didn’t know if I was going to get Louie anyway and then to pick a path when the rear end was underneath me and not

sliding. It made it quite interesting. It worked out. We got lucky. Lady luck was there and it was a blast. It was an awesome race with Louie and I didn’t think I’d get him, but I did. He was giving it his all.”

Lou Cicconi, who has been coming on stronger at each ISMA event reiterated Perley and relayed that he also had a car problem. “It was awesome. It was awesome. I thought we might have him tonight. I starting riding the brakes and a right front tire started going bad. It was fun though. It was a good race.”

Bobby Santos, who led from lap four, was no match for the charging Cicconi and Perley, but he was a solid third place finishers. Said Santos as he prepared to in the NEMA main, which he would eventually win, “It was a good third. I have to thank Howie and the team. They gave me a good car. I guess Perley and Lou are a step ahead of everyone else right now. We just have to work hard to catch up.”

Ray Graham Jr. led the 25-car field down to green and held the point until a yellow flew for Rick Wentworth hitting the wall on the backstretch. On the restart, Graham lost his lead to Franklin, Mass’s Bobby Santos who would lead only one lap before another yellow.

On lap 5 Bobby Haynes spun off the track while Ray Graham Jr. parked his 90 with obvious mechanical ills.

Back underway it was Santos, Mike Lichty and Cicconi up to third passing Joe Gosek on the way. In one more lap, Santos had Cicconi tailing him with a vengeance as Lichty fell back to third ahead of Gosek, Nokie Fornoro, Scott Martel and Mike Ordway.

At the lap 15 mark, yellow flew again as the top four of Santos, Cicconi, Fornoro and Chris Perley, who was working his way smoothly toward the front, slowed for a Doug Heveron and Joe Gosek incident. Both cars were towed away.

“Liquid” Lou hounded Santos at the restart diving high and low to get around. Santos held his spot while Chris Perley came up to join the fight. The young Santos was not intimidated by the duo behind him as Cicconi was tucked right on his rear. It was here that Perley showed the signs of slowing as he mentioned earlier when the shock broke.

Just at the halfway mark, Cicconi finally made his attempts good and Santos was relegated to second just ahead of Perley. Some lap cars added to the excitement and by lap 27, Perley was hounding Cicconi after passing Santos a lap earlier. The two vets diced back and forth through traffic making it look like a Sunday drive with both their cars not entirely up to par.

On lap 36, Perley rocketed by Lou to take over the lead. Behind Cicconi in third was Santos holding off Nokie Fornoro and Mike Ordway. Scott Martel, Mark Sammut, Bentley Warren, in Vic Miller’s second car, Joe Petro, Bob Magner, Justin Belfiore and Dave Trytek were still fighting to move forward and at the same time not to fall to Perley’s wrath.

Broken shock or not, Perley was well in command as he has been for several outings, when the checkered fell. Cicconi and Santos were behind with some lap cars spliced between them. Ordway took over fourth in the waning laps from Fornoro to complete the top five.

As Fornoro headed to his NEMA midget ride, Ordway commented that he was pleased with fourth. “It’s my first finish. That is good. It’s good for us. We were going forward instead of backwards. We’re happy. We have a long way to go yet but we’re gaining on it. We’ll see what happens next time.”

NOTES: Heat crash badly damaged the 91 of John Torrese, also affecting Vern Romanoski. John Payne also had something break on his 67 in the first heat sending him into the fourth turn wall. Mike Badessa broke a drive shaft keeping him out of competition. ISMA’s next outing is the famed Hy-Miler Weekend at Sandusky on July 28-29.