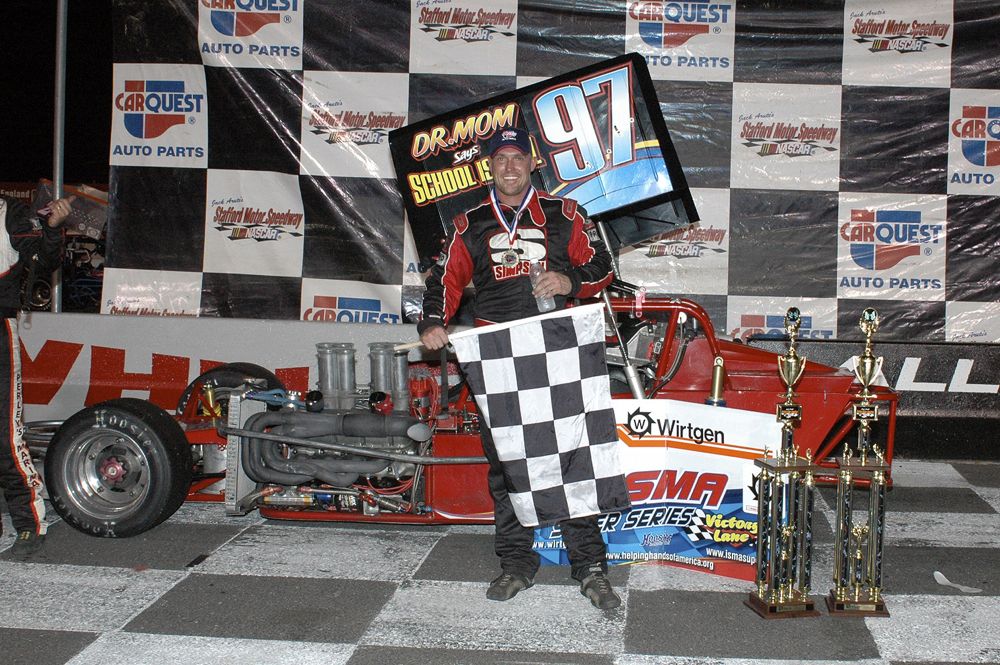 Stafford Springs, CT – Rob Summers fulfilled a dream Tuesday night at Stafford Motor Speedway. While successful in several divisions of auto racing in the Northeast, Summers’ secret love has been the potent winged supermodifieds. After only a half season of competition in 2006, Summers had made a fulltime commitment to drive the Howie Lane 97 this year. In the Xtreme Tuesday main event, Summers not only kept up with the pretty much invincible Chris Perley after Perley took the lead on lap 17, but he dogged the point leader until a bobble up front by a lap car gave the Vernon, CT driver his chance and he took it. On lap 37, Summers took the lead and the eventual win. It was his career-first on the ISMA-Wirtgen super series circuit.

Summers reviewed his achievement. “This is something I’ve always dreamed of. It’s probably the biggest race of my career. This is big. I’ve been wanting this one for a while. Ever since I was a kid I was intrigued with supermodifieds. They were always the coolest cars to me and to win in one of them is great.

“The longer I went tonight, the better my car got. We had it perfect tonight. Howie and the crew had the car the best it’s been since I’ve been driving it. I can’t thank them enough. With these supers the right rear is everything. We had the car tight in the beginning and it was tough to get by some of the cars. But, once the car came in it was on rails.”

After catching up to Perley – no easy task by any means – Summers awaited his opportunity. “When Bob Magner got sideways there, and I didn’t see a caution, I was gone. I was close one other time. I think we were about the same speed. Lap traffic was something. I got hit once and bounced off the back stretch wall. I was holding my breath. Last Saturday was pretty disappointing at Jennerstown. The guys worked their butts off in pretty much one day to get the car back together and I won. It was particularly rewarding to win at Stafford. I love this place. I’ve had a lot of laps here. We’ve struggled with the Tour car here but thank god the super was perfect today. It’s a big booster for us.”

Getting by was one thing. Staying there was another. Summers knew Perley would not go away. “Once I got by Perley I knew I had to get by that lap traffic because there is no one better in lap traffic than Chris. That’s why I was trying to get through it whether I had to knock or crash through it. I knew he was right on my heels. I had no idea where he was but I figured he was right there. I got sick of seeing that 11 pass by every week, driving by me on the outside like I have an anchor hanging off the car. To beat Chris tonight is big. He’s the best of the best!”

After winning four features to date, second place finisher Perley reiterated some of Summers comments, “I got the lead and was kind of on cruise control and then Robbie showed me a wheel and woke me up. He got me going. I thought we might have him covered. Then Magner got crossed up and I didn’t know which direction he was going. I got by and then I got back on the throttle and nothing happened. It just loaded up and I thought it was going to shut off for a minute. Then Robbie came up beside me and then he got out front. It was a great race. We were really evenly matched. It was going to be whoever was out front at the right time. Hats off to Robbie and the team. They’ve been working hard. We’ll take a second. I’m very happy with that. Traffic was interesting at times. Everybody was trying to drive their own race and hang on to their car. It makes it tough to pay attention I guess. All in all it was a good night.”

Mike Lichty, for the third time in three races, had a podium finish. Still looking for that first win, he’s certainly gaining. “It’s been a great four days for the whole team. The cars came out in one piece. We can’t complain about three thirds in three races. We’re just a little off still. We’re having a problem with the tightness in the car; trying to get the front end gripping on corner entry. It looks like we’re going to have to go back to the drawing board and figure it out. All in all the Patco Transportation, Stage Door team did a helluva job!”

A very hot and humid night did not deter the great racing that ensued. Twenty-five cars started the 50-lapper with three more broken before feature time. Dave Trytek jumped from his pole position to build up an early lead ahead of his teammate Jeff Holbrook, Summers, Lichty and Dave McKnight. By lap ten Dave was slicing through the tail of the field until lap 13 when the first yellow fell for Brent Roundy who lost a tire.

The field now bunched behind Trytek, but he pulled away. Back in the pack though, Perley was methodically picking off car after car. He was third behind Trytek and Holbrook when the next yellow came for the third Holbrook car of Bob Magner. Magner had slid off the track and into the grass. He recovered and pitted momentarily while the yellow flew.

On the restart, Perley just drove by Holbrook in turn two and Trytek in turn four to take the lead. Summers, however, did not lose track of the 11 as he followed him.

The last caution came on lap 23 when Dave Sanborn stopped on the track.

The field bunched behind Perley with Summers, Trytek, Holbrook, Lichty, Fornoro and McKnight the closest contesters. Perley could not lose Summers as the laps ticked away. Lichty moved by Holbrook to take fourth behind Trytek on lap 27.

On lap 32, Summers was obviously getting stronger and he tucked up behind the Perley car, even getting alongside on lap 33 as traffic played a major role here. On lap 37 the Magner slide gave Summers his chance and the lead. Now he also knew he would not lose Perley easily and for ten laps he dove down and up around lap cars with Perley in hot pursuit. In the waning laps Mike Lichty and Dave McKnight got by early leader Trytek and the checkered fell non-to soon for Summers for his career-first with Perley settling for second. Lichty, McKnight and Trytek stayed in that order.

McKnight, who has had an up and down season to date, was pleased with fourth. “Outside of the heat, everything is good. The Patco, Stage Door team did a good job. We’ve been struggling since the crash. We’ve had this power steering problem and we’re still having it. Hopefully we’ll get that straightened out. It was a great effort by everybody involved. I’m happy with the finish. We’re slowly getting back on track. It was a great day, everything is in one piece and now we’ll go to Sandusky and see what we’ve got.”

And, Trytek, likewise, was satisfied with his early lead and eventual finish. “Starting on the pole helps a ton. The car was pretty good; it just got tighter and tighter as we went on and we lost a couple spots at the end there. But, I’ll take the fifth. I haven’t had that in a long time.”

Notes: Time trials had to be scratched due to a computer failure but Bentley Warren had unofficially set a track record of 16.797 before the demise. Half the cars had not taken time…Erica Santos, older sister to Bobby Santos, became the first woman ever to win a NEMA event as she held off Joey Payne for the win… Fornoro and Cicconi did double duty…ISMA is off until the Sandusky Hy-Miler on July 27-28.Mike Badessa and Bobby Haynes Jr. were scratches prior to the heats…Jeff Holbrook brushed with Lou Cicconi after the checkered and ended up in the wall…Bentley Warren, having recuperated from knee surgery was in his first race of the season. He said the car was sliding around due to a tire going down.