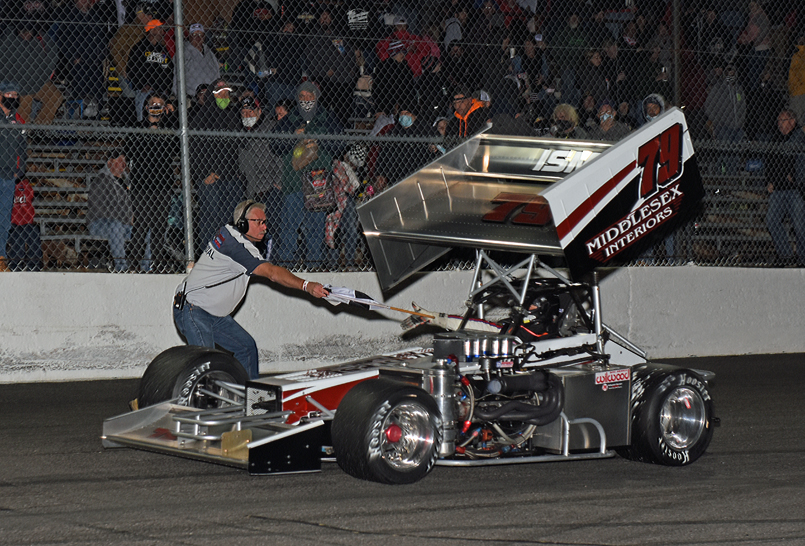 Epping, N.H. – The annual 125 lap Bob Webber Sr. Memorial Classic, also the 55th Classic at the famed Epping, NH raceway was slated for Saturday, Sept. 19, with hopes that the COVID-19 pandemic would not cancel it. With much work and preparation by the Webber family in the past months, the race was able to happen.

A stellar field of twenty-five supermodifieds gathered to compete in the running of the prestigious 55th Star Speedway Classic and it was a race for the history books. Battling for the win were some of the best big block supermodifieds from the Midwest to New England, and albeit the fact that no Canadian competitors could attend due to a COVID-19 border shutdown, it proved to be a fitting end to a definitely disrupted 2020 supermodified race season.

The appreciative crowd on hand was treated to a day of good weather and great racing. The race was fast and furious with only three yellow flags slowed the progress as Chelmsford, Mass. hot-shoe Jon McKennedy staved off the advances of Pennellville, NY’s Jeff Abold to claim his third win of the long running annual event.

McKennedy talked about his victory joined by a crowd of well wishers.

“ The car was awesome. A big thanks to all of the crew. Everyone worked hard. We had a really good car. It all goes back to the garage. We have a ton of hours on this car. Literally we have about a hundred hours of time this winter going over it to prepare this car. But you know the race is won at the shop. I’m just the lucky guy who gets to drive it. We had good preparation and a good notebook to go off of after a few years of running the same car. It feels good.

A big thanks to my car owners Tim and Cheryl Lepine, Middlesex Interiors. I couldn’t do it without Steve Vinal and a great bunch of guys. It feels good to win another Classic. There was some really good competition and in my opinion probably the strongest field we’ve had in a long, long time for this race. So it feels good. We were fast all day. I was able to get the lead early and kind of control the race.

Was he aware of defending race champion Jeffrey Abold sneaking up throughout the race?

“ I was trying to pace myself a little bit, but just as I would get really comfortable pacing myself, I could hear someone rolling up to my outside. I knew it was Jeff. I could see the scoreboard and see the 05 was behind me. At times he pushed me hard again for several laps and I’d try and see a little bit I could stop those. He gave me a good race. You know Jeff is a class A driver. He’s awesome and it’s fun to race with him nice and clean. There were a lot of lap cars out there and I feel like I lapped a lot of them a multiple times. In the most part they were pretty good. They gave me a groove. These cars now are so aero dependent that several times in traffic the car got really loose. It got my attention, that’s for sure. But, I was able to keep it under me and get my third Classic.”

Abold was to settle for second despite some strong challenges.

“We tried every which way but driving through him – inside, outside, every where. We were pretty equal tonight. Towards the end I just started fading a little bit. I think we had a bit of a car issue, about then, but regardless of that I think Jon drove a great race. It was hard coming from further back and to pass a lot of fast cars this year to get to the front. It was obviously a who’s who of supermodified racing here. I felt like there was a fast car party and I wasn’t invited. I was able to get up through everything and it felt great but I started fading and I think Jon stayed the same and he was going through lap traffic with not problem. He knows this race track and he knows how to drive his car. My only chance might have been on a restart but the last one was back on lap 86. I had plenty of time I just couldn’t get it done. Congratulations to Jon. He was very deserving of the win. They work hard and I am not ashamed of finishing second to him. It’s always a lot of fun racing with those guys.”

Taking a podium spot after the competitive race was Mike Ordway Jr., a familiar second generation driver from the New Hampshire area.

“This third was our best run here in the Classic. We just tried a bunch of new stuff. There are no points this year so we’re trying different shock packages and other different stuff. We’ll see what works and what doesn’t, We were decent tonight and we can take some stuff from here. All in all it was a good night for the last race of the year in this very short season. I just can’t thank Susan and Clyde enough for letting me drive their race car and to Mickey and Mike Marollo for the engines. JRI Shocks, Strange Engineering, Strange Oval, everybody that puts an effort in on this deal. It’s pretty neat being able to race for Clyde Booth. It was tough out there tonight. I think the two best cars out there tonight finished first and second. I do believe personally that Jon McKennedy and Jeff Abold are right now the best supermodified drivers. I’m friends with both of them and happy to finish third to them. I’d also like to thank Bobby Webber and his whole family for inviting us here and putting on this show.”

After all the time trials were done, Oswego Speedway’s legend Otto Sitterly not only set fast time of 10.893, but found himself on the pole by luck of the redraw. Sitting outside front row was Jon McKennedy, who was looking for a third Classic win. And, the race was on. 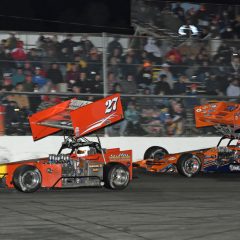 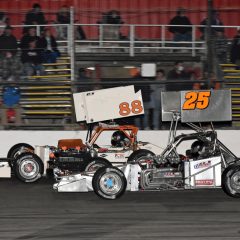 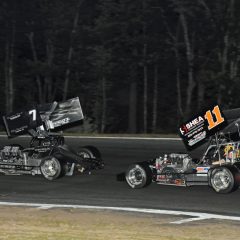 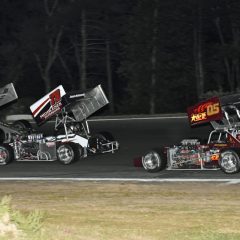 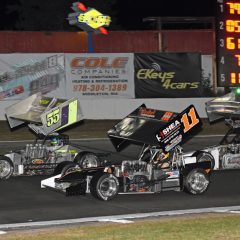 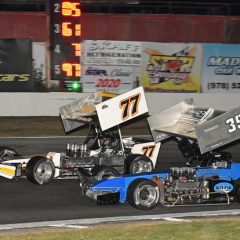 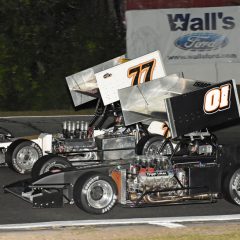 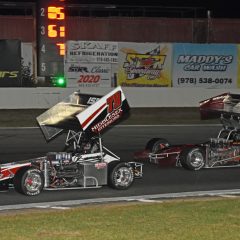 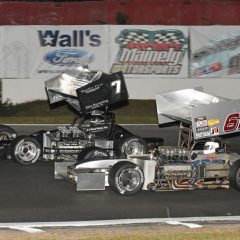 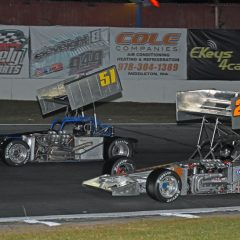 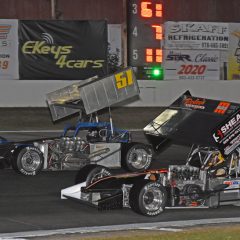 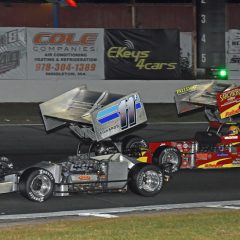 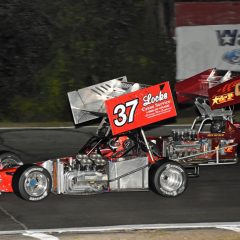 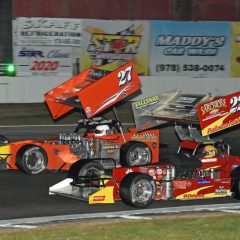 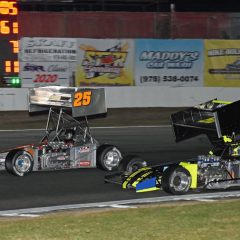 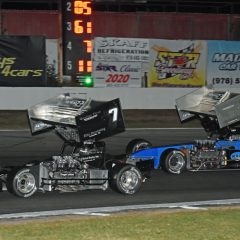 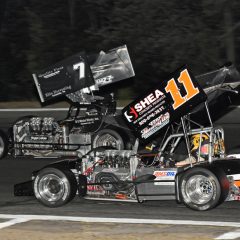 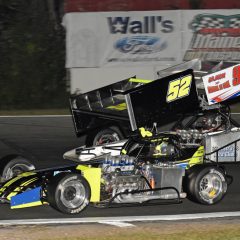 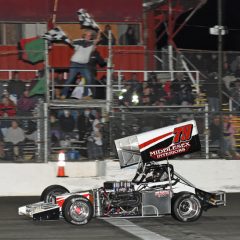 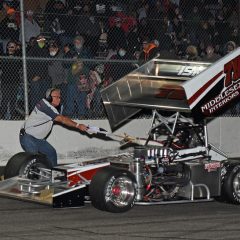 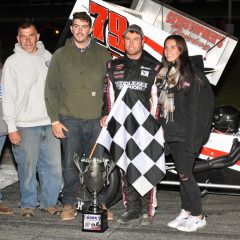 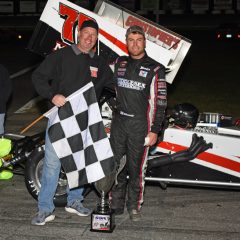 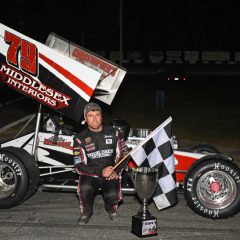 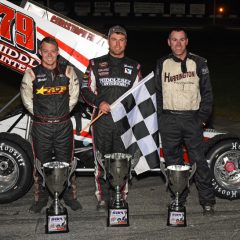 Sitterly grabbed the lead from the start with McKennedy and third spot starter Chris Perley beginning the chase. Sitterly was able to pull away in those early laps but McKennedy, Perley, Rich Reid, Mike Ordway Jr., Ryan Locke and Russ Wood were right there, as a host of others were on the move.

Sitterly saw his lead advantage fizzle when the yellow came out on lap 20 for Mike Netishen and then another quick stop came on that restart for Rick Reid who pitted.

Sitterly didn’t waste anytime getting back to his lead after fending off a challenge by McKennedy, but just past the lap 30 mark, McKennedy made his move around Otto, pulling Ordway and Perley with him as Abold was methodically moving in on the the top 4.

While McKennedy led, Abold got by the 61 of Ordway around lap 50 leaving Ordway, Sitterly, and Perley trailing with lap traffic starting to mount up.

The halfway bonus of $1000 donated by Shea Concrete Products was grabbed by McKennedy but Jonathan was soon to have Abold getting closer despite a couple lap cars holding the 05 up some.

By lap 80 McKennedy was being slowed by roadblock of about 4 lap cars and Abold closed even more.

Two laps later the last yellow flag would fly for the 22 of McVetta who ended his night in a cloud of smoke.

With 25 laps to race end, the action behind the 79 remained hot and heavy from Abold. Ordway, Sitterly, Perley, Jedrzejek and more were still within shooting distance. But as aforementioned by Abold, he ran out of options on how to get by McKennedy as the checkered flags were fast approaching. Abold, Ordway, Sitterly and Perley rounded out the competitive top five.

Sitterly, was pleased with his fourth place in his winged 7.

“You know with not much experience with this car and not much experience here we just did what we had to do what we thought we had to for the feature. And, the car went away quick. It was like by lap 40. The tires started slipping. At that point I was able to hang on decently, but the top two at least were considerably better. I saw the 61 wasn’t too much better but he had track position. And, I know Perley was poking a nose under me. The track was pretty good all in all, it was just my car was free. I couldn’t put it in places I needed to be and make moves I wanted to make. Overall we’re happy. Each time we bring the car out we are learning more and the results are starting to go in the right direction. It was fun to race with the wing and to be competitive.

Chris Perley, with 5 Star Classic wins to his credit, was also happy with fifth.

“We went 125 laps and nothing broke. I am very, very happy with the car. The crew worked hard. I don’t think we have enough motor for this track. Congrats to everybody up front and I hope the fans enjoyed it. I’d like to thank my sponsors, crew and car owner and I got another top five. I am so happy with the freaking turnout. It’s about time. I don’t know how many finished the race but with this race we shouldn’t have had much attrition. Most of us have not raced more than two races this year. We only had three cautions but they seemed to take long. But I thought it was a good race and I love double file restarts. I lost a spot on it and I should hate it but I don’t. We should stay with it. Anyway, we got a top five and I am happy for that but disappointed because I know the car has so much more than that.”

Top 12 time trialers who redrew for top 12 spots in lineup: