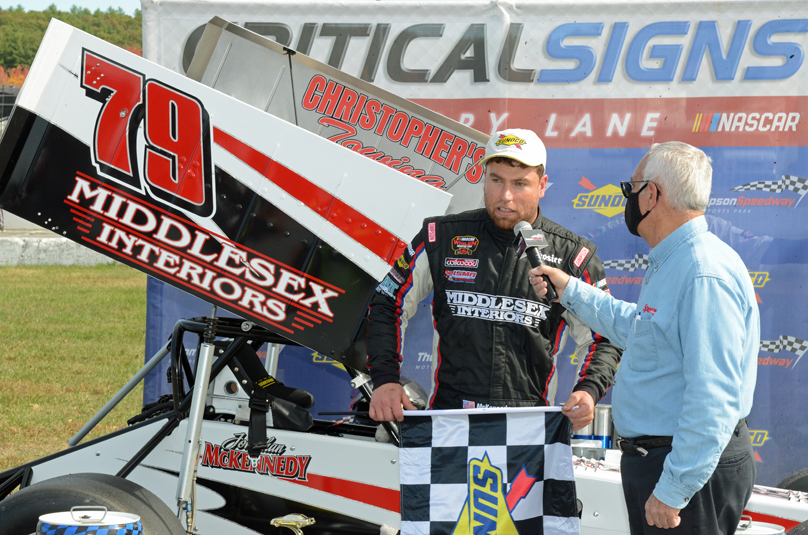 Thompson, CT – The ISMA supermodified season in 2020, ended with only three races run, and all were won by Jonathan McKennedy. His win this past Sunday at the Thompson World Series was a repeat of his 2019 World Series which started the four straight streak. On Sunday McKennedy started third and battled his way past Otto Sitterly to begin a race-long chase with Chris Perley who started on the pole by luck of the draw. The battle up front ended late in the 50 lapper when race leader Perley approached slower cars and in the ensuing cat and mouse game, McKennedy was able to take the lead away on lap 42 and fled away to take the win eight laps later.

McKennedy noted after his victory and prior to preparing for his NWMT modified run to come:

“This was a tough race. Whenever you have Chris Perley starting on the pole here at Thompson, you know you have your work cut out for you. He was fast, but I could see he was getting loose. We were both pretty loose throughout the whole race actually, especially coming off the corners. I thought it was a pretty good race. At times I got pretty near him. At one time we did make contact in one turn. He took a pretty early entry down at the bottom in that lap. I was pretty much right there. I had to drive the car in the grass. We did touch but luckily we both gathered it up. Then I was able to get back by him a few laps later clean. It was a great race. The guys worked really hard. It just feels really good. I mean we are on a roll. I think we’ve won the last four ISMA races.

In regard to the lap cars that played a key role in the latter stages of the race, McKennedy said, “The lap cars were definitely a little challenging as we fought for the lead. At the most part they gave us some room.

“This is a really good car and a really good group of guys work on it. A shout out to my new car owners Tim and Sheryl Lepine. And to sponsor Middlesex Interiors. It’s been an unbelievable season with this car and team.”

“Overall it turned out to be a good race. I think Chris and I went back and forth the whole race. Thanks to ISMA for putting this deal on at Thompson at the last minute. It’s always good to be here at Thompson.”

Chris Perley, who started up front, led all the way except for 8 laps, contending with McKennedy from the start. The Rowley Rocket had drawn the pole in the draw for the lineup and that was really a spot he did not want.

“Like we always say, when you start on the pole, the only way to go is backwards. But I just didn’t have the car today. From lap five I knew I was in trouble. Jonathan showed me a wheel a few times but we were able to clear him in the straightaways until the one lap where he went in a little too rambuctious and punted me a little. I think we put on a show for the fans I guess. I’m really disappointed with second, but also happy with second for the crew. But to get second that way is tough. We just didn’t have the car. One minor change and we would have been gone as in days of old. The car is just so close. If our car had been where it should be, we would have handled the lap cars and been gone. But, I just couldn’t turn the car. The car would not turn the corner unless I stopped. So Jonathan got us and congrats to him.”

The race started with Perley taking the point with Otto Sitterly in between the famed 11 and the McKennedy 79. The one and only caution of the race came on lap 4 when Ben Seitz brought out the yellow when a torsion bar clamp broke on the Soule 32 sending him around and into the wall between turns one and two. He was towed off the track. 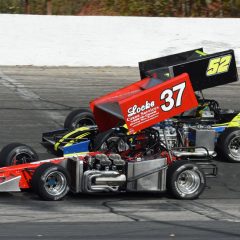 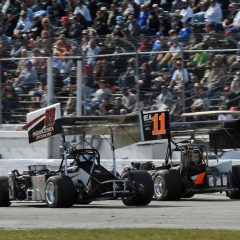 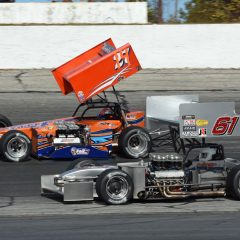 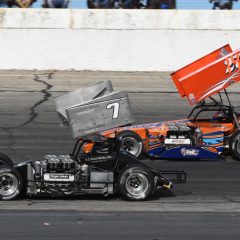 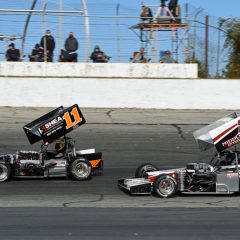 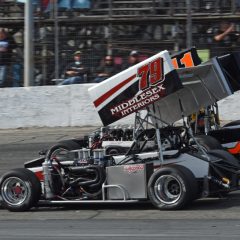 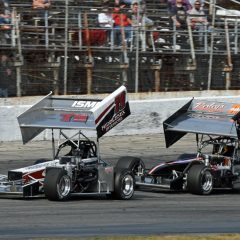 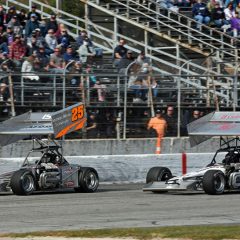 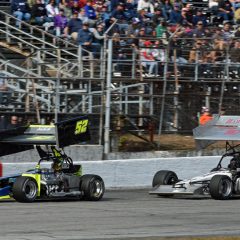 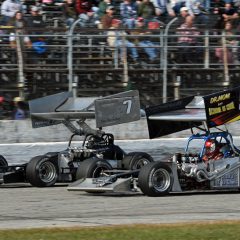 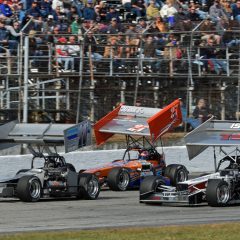 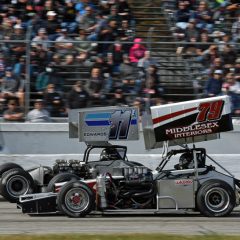 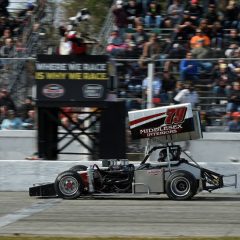 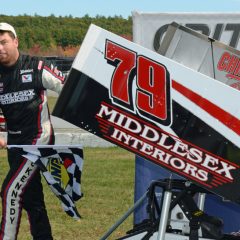 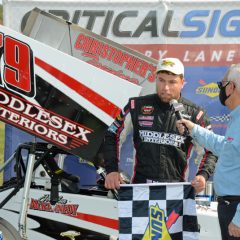 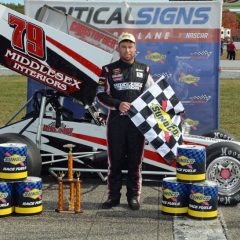 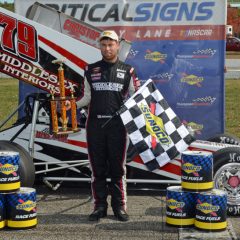 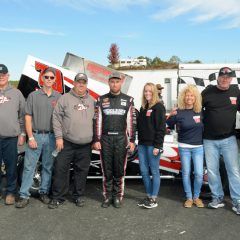 On this restart, McKennedy was now on Perley’s tail with Sitterly losing a spot to modified pilot Ron Williams who was in the Lane Racing 97 for his supermodified race. Williams moved into third here and never lost the spot in a fine run. He said afterwards after that third place finish, “ It was a good race. We were up there behind Perley and McKennedy for a while. I was just waiting to see how the race panned out. I saw McKennedy make a couple moves. I wasn’t sure if he was saving a lot, so I kind of judged things off him basically throughout the entire race. It was a solid run for our first time. I’m really happy with it.”

Perley, McKennedy and Williams were the lead group for quite a while as behind them Mike Ordway Jr., Otto Sitterly, Dan Connors, Dave Danzer, Anthony Nocella, another modified standout at the helm of the Lane 9 in his rookie appearance, and Kyle Edwards were dicing for spots as the race flew by.

At the halfway mark, Perley had lapped the 14 of Joey Payne, leaving McKennedy and Williams a car length behind. Ordway and Sitterly ran a slight distance back with Connors, Ryan Locke, Danzer, Edwards, Dan Bowes, Bobby Timmons and Dave Duggan following.

By lap 37, the action began to heat up as Perley was approaching Bowes who became the possible key to McKennedy taking the lead but as Perley went to the outside of Bowes, McKennedy backed away slightly. But not for long.

McKennedy crossed the line with a lap car in between his car and that of Perley’s 11. Williams had made his first-ever supermodified race a podium finish. Ordway, was not complaining as he tallied another top five finish for the depleted season finishing fourth while Lane’s number 9, driven by Nocella, claimed fifth.

Ordway closed out his season commenting, “It was a decent run, getting up to fourth. I just needed a little more adjustment from yesterday to today. All in all it was a good run. We’ve run five or six races this year and never finished less than 5th and got the win at Sandusky. So to come out of here in one piece is good to go into the winter. This was probably the best car we’ve had here at Thompson as far as racing conditions go. I just can’t thank Clyde and Susan enough for letting me drive this car. And thanks to Marollo Racing Engines, JRI Shocks, Strange Engineering, Strange Oval and certainly everybody who helps out on this deal. It’s a pleasure to drive.”

And rookie Nocella was also pleased with his fifth place. “It was a pretty good run. We had to start back a little ways. The car started out a little tight but as we went on the car got better and better. I was able to pass a bunch of guys there but it would have been nice to have a yellow to see what we could have done. I think we could have done better there with that yellow. All in all it was a pretty good run I think. I’m happy with it. I’m definitely ready to do this again!”

Last Car Running ($100) sponsored by ISMA Treasurer Deg Forgie in support of all the Canadian Race Teams, Members and Fans who were not able to attend an ISMA race in 2020. Winner: Joey Payne