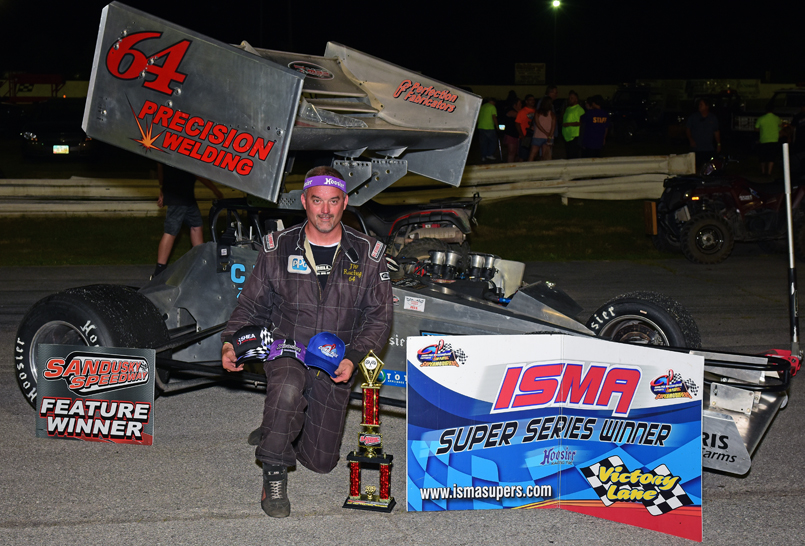 SANDUSKY, OH – A good field of supermodifieds from ISMA and MSS was on hand to start off the 42nd annual Hy-Miler weekend of racing at Sandusky Speedway’s Fast Forty on Friday night. On one hand it was a great night for Jim Paller who drove to his first ever Fast Forty and ISMA win. But, for many it was a night of destruction from the first green. Paller, however suggested he had some good luck riding with him in his Bodnar built number 64 machine.

Said Jim in victory lane, “Tonight, fortunately, we got lucky. Things seemed to pan out our way. We got a good pill draw. We started outside pole. Then we got lucky as we got Moe two times. He’s a really good driver in a good car. We got a good start and we pulled out front. The car was excellent all night. It kept under me nice and smooth and we had no problems. Lady Luck was on our side and we’re here with a win. I have to thank all the people on the crew – Adam and Randy, Dennis and then Jim Bodnar and Jim Bodnar Jr. who have been helping us and teaching us a lot. Adam is the one who is really dialing us in, getting us going and helping Jim and everyone. My wife and the kids are constantly helping us do what we can do.”

After starting pole Moe Lilje had given way to Paller, then lost second in the last laps to a hard charging Mike Lichty, who had started in eleventh spot. Lichty was pleased with the outcome of the race as he looked forward to the Hy-Miler 100 on Saturday.

“It was a good night. Attrition played a little into it. We just started a little off the pace similar to Jukasa. The car is way too loose and then the longer we run, the car keeps coming in to me. We’ll take second. I think I learned a lot tonight to go on to tomorrow. That’s the one we have always wanted. I think if we had gotten to second a little sooner we might have had something for Jim. I have to thank everyone from Reed’s Salvage, the whole Reed family, my father, Patco Transportation, and Dennis Level for the awesome horse power in his reliable motors and of course everybody on the crew for putting all their effort in.”

Lilje, also looked forward to a good Hy-Miler 100 finish, after his podium finish. “The car was tight the whole race. I had to spend a couple laps on the outside guarding the outside and then I let Jimmy get away a little bit. Once it got tire heat I was able to work a little bit with the race car and make up some real estate on him. But, the yellows just didn’t fall in our favor. During that long run there in the first half of the race I just about caught him and the yellow came out. I was just a little frustrated to see a yellow there. But it is what it is. Tomorrow is the race we really want to get. So I think we’ll have a good race car to work with and so will Mike so I think it should be a good race for the fans”

Lilje and Paller sat on the front row to bring the field to green for the usually quick 40 lapper, but unfortunately, a red flag stopped things right after the start. The whole fourth turn was blocked after Rich Reid spun into the wall, collecting Ben Seitz, Mark Sammut, Jeffrey Battles, Nick Cappelli, Ryan Winningham, AJ Lesiecki and more. After things got sorted out Sammut, Reid, Cappelli, Seitz and Battle were pit-side with a lot of damage. Lesiecki was able to return.

The race was restarted and within a lap, Paller had taken the lead followed by Lilje, Mike Ordway Jr., Danny Shirey, Dave Shullick Jr., Timmy Jedrzejek and Otto Sitterly. 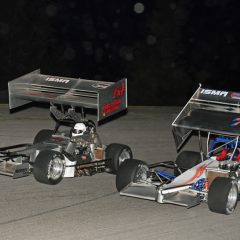 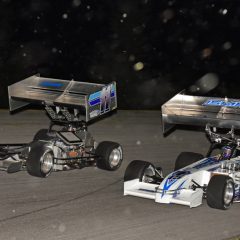 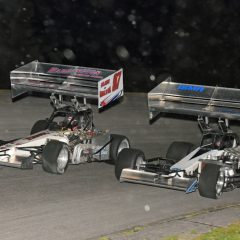 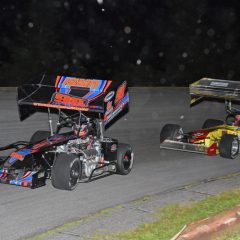 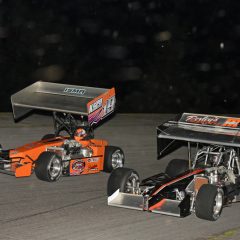 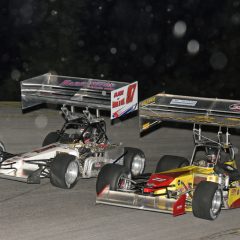 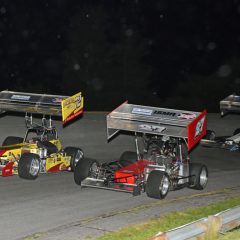 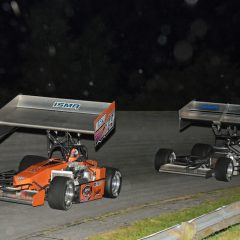 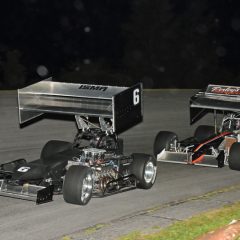 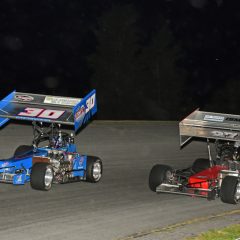 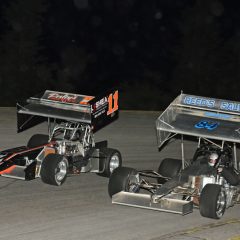 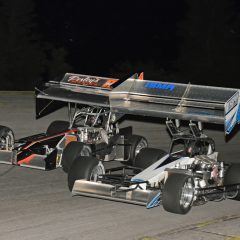 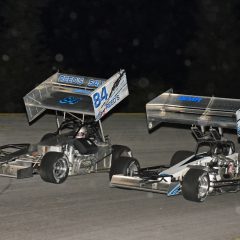 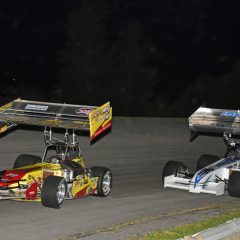 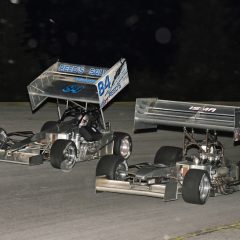 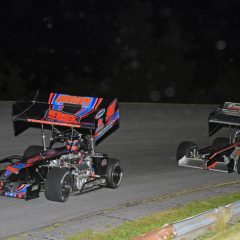 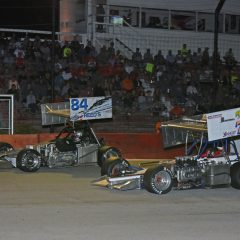 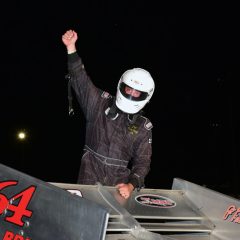 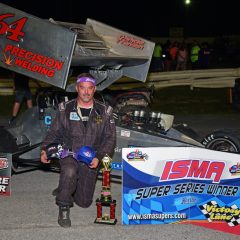 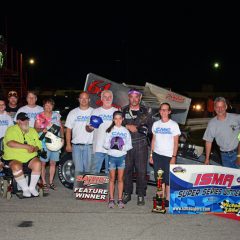 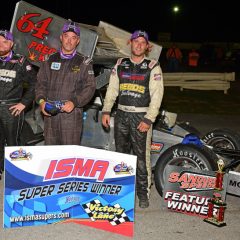 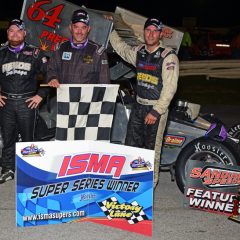 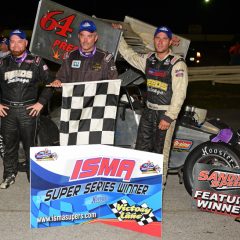 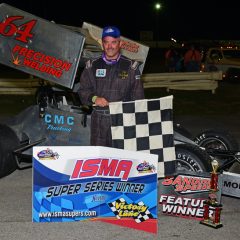 Paller was able to pull away from the Lilje-Ordway duel, as Shirey, Jedrzejek and Shullick were being tailed by Sitterly, Lichty and Michael Barnes in the 11.

After ten laps were down, Paller still held off Lilje, Ordway, Jedrzejek and more all looking to move forward.

One lap prior to halfway, the yellow dropped again as the 97 of Jedrzejek stopped off turn four with a good part of the left front of his car missing. The 27 of Winningham was also parked in four. Both exited the race.

Things got back under way with Paller out front, but the 30 of Talon Stephens was next to retire to the pits when something broke on his car shortly thereafter.

Stephens was the next victim of a good night gone very bad, when he caught a wheel and the 19 flew off turn three. Stephens joined the contingent already working on their cars back in the pits.

The restart of lap 25 proved to be the end of the cautions as Paller once more pulled away from the 74 of Lilje, trailed by Ordway, Lichty and Shullick.

Jim now had victory in sight as the laps wore down at a rapid pace. Teammates Lichty and Lilje diced back and forth for second with Lichty finally taking the spot. A distance behind were Ordway and Shullick in the top five.

Back in the pits, more than one race team faced a long night of repair to get ready for the big one on Saturday. Most of the cars and crews, however, were already gaining on the damage and conceded they would be ready for Saturday’s race.