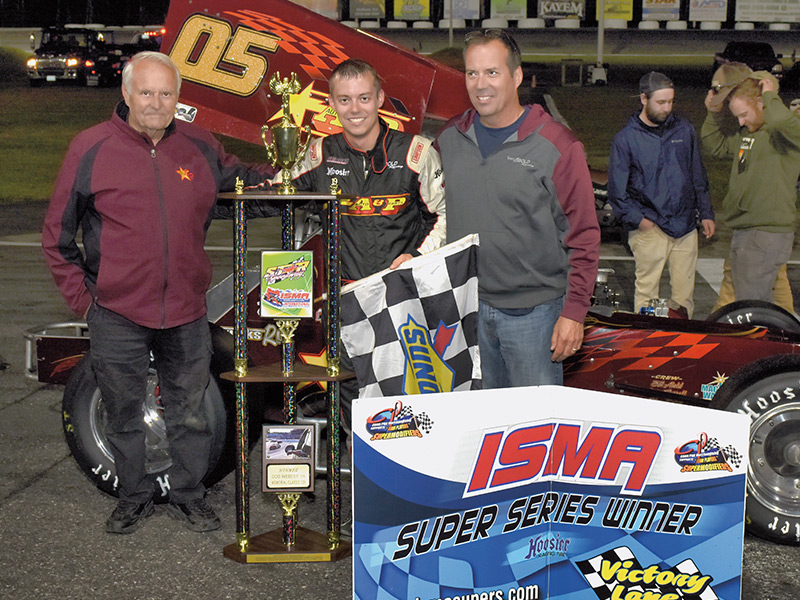 OSWEGO, N.Y. – With COVID-19 dictating much of what has happened or not happened this year, auto racing has had its share of disruption of schedules. Jeff Abold says he understands that things have had to change and thinks most race car drivers do too. But despite major changes and cancellations, some races have managed to run including the up coming Sept. 19 Bob Webber Sr. Memorial Star Classic.

Driver Jeff Abold, from Pennellville, NY is anxious to get back to Star Speedway to try for a second straight Bob Webber Sr. Memorial Classic win. It will be a family attempt once again.

The Abold family is a racing one with grandfather Bill starting in snowmobiles with Jeff’s dad Pat a standout. It was on to supermodifieds in the late 1990s with the Bill and Pat team picking up an Oswego track championship in 1992 . They also joined with ISMA and garnered two championships there in 1992 and 1993. Pat would be runner-up to Vic Miller-Chris Perley in 2004 and ISMA driver champion in 2005 with car owner Paul Dunigan.

Jeff Abold’s record at the Epping, NH oval certainly shows he has a good chance of accomplishing his goal. Since 2012 Jeff has run 8 Star Classics with no finish less than 5th. He has two fifth places, two fourth places, one-third place, two 2nds and finally a win in 2019. The Pennellville, NY driver is preparing to try again. But with only two races run this year, and a few practice sessions, how does Jeff look at this year’s Star Classic as far as preparation? The Abold team had run one practice session at Oswego Speedway prior to racing at Sandusky Hy-Miler 100 in July and Lee Ollie Silva Memorial 75 in August.

“It’s different this year because we have more time to work on the car. We’re just trying to go through the car with a fine toothcomb and catch anything that needs to be fixed. Usually this race is the week after the Oswego Classic and we only have a week’s time to switch over from Oswego trim to ISMA trim. But, that’s kind of nice at the same time because you’ve been racing all season long. You’re in the groove. This year we don’t have a lot of momentum from the race season heading into the Star Classic. We’re just going to do the best with it and be the best prepared as we usually are.

Said Jeff: “We did do one more warm-up after Lee because we had some issues. Other than that we have only been on track three times, three different days. Basically that’s it. But I think everybody else is in the same boat, although maybe some guys have run a few more races (in Ohio), but it will be pretty much the same for everybody.”

In 2007, when a student at SUNY Oswego, Jeff began his supermodified career. He finished 3rd in the Oswego Classic, in his first supermodified start. Several years later Jeff, his dad and grandfather Bill would start work on a car of their own design. They wanted a car that would run Oswego and then ISMA with the wing. The Abold 05 car Jeff runs this Star weekend is that car and it has begun to come in as they hoped.

Jeff described the process “It was built from the ground up with piles and piles of metal, chrome molly, sheet metal and everything and we turned it into something about eight or nine years ago. It’s been transformed a couple times, cut apart from front end or back end and redone. In the last four to five years this setup is now the one we stuck with. And we are starting to see some success with it. We won the Oswego Classic (2016) and the Star Classic (2019) with the same car. And that’s what we take pride in. It wasn’t built purposely for Oswego or purposely for ISMA. We just tried to build a supermodified that we could run and be competitive with everywhere.

“To start with we struggled for a long time. But now I have a car that I feel I can show up with at Oswego or at an ISMA race or a MSS race and be competitive. Its kind of fun in that sense. It’s tough also because we are just switching stuff over by doing that but it’s just a lot of fun doing what we are now. Hopefully we can keep doing that. It would be nice to have some more races to be able to keep trying it, but it is what it is.”

With a strong field of cars expected for the Star Classic and the season’s supermodified finale, what does Jeff expect?

“That’s awesome to see a good field. The last few years the fields have been under twenty. To be over that number is great. But then this is it for the season and some have not raced at all it’s logical to try and make it to Star.”

Who is Jeff looking for to be some of the tough competition in this expected field?

“It’s the usual suspects from the area. Russ Wood should be in the field – I hope. Then Chris Perley, who has been running that track forever. Jon McKennedy. Mike Ordway Jr. … Those guys grew up racing at Star. They know the track. They have thousands of more laps on it than I do. I think we have a good handle on it but any one of those guys can do it. There are others that run well there. It’s a tough place to run and get set up for. So there is any number of people that can win the race going into it. We have been fortunate enough to find something and be competitive. It seems like every year you are starting fresh and have to try something different to do. But just looking through the pits at Star you see a who’s who in supermodified racing. It’s anybody’s game.”

Helping as crew on the 05? “My grandfather Bill, who started the race team over 30 years ago. He still works on the car and helps with the engine. Of course Dad, who is the car owner. Kenny Burd has been with us forever all the way back to the snowmobile days. Mike Silliman has played an integral part for years. Mom Kris and wife Amie also play a major role. Larry Farrell came on with us about ten years ago has been an awesome crew chief for us. Josh Rushlo and Mike Spath have been helping us along and have also been part of our sponsorship.

Sponsors on the 05? “A&P Auto Parts has always been our title sponsor and family business. Skip’s Fish Fry has been with us for a few years. Shawn Cathcart has been helping us out. Trucks R Us is someone who has been helping over the years. Magic Wand Construction has come along to help Tracy Road Equipment who is another new sponsor who came onboard this year. They have been a big help and I wish we could have done more for them. We have a lot of fun with all of them. They are a great group of guys.”

As a closing note, Mike Ordway Jr. mentioned in an interview after Lee’s Ollie Silva race that Jeff Abold was probably the best long distance racer in supermodifieds in his opinion. Ironically, it was Ordway who nosed out Abold for the Sandusky Hy-Miler win in July and that win would have made Abold a member of the famed Triple Crown of supermodified racing club, which was started back in the early 1980s. To be a member, a driver has to win the Sandusky Classic, the Oswego Classic and the Star Classic. Of course Bentley Warren was the first winner, winner doing all thre4e in one year, but only Mike Ordway Sr., Doug Heveron, Joe Gosek and Dave Shullick Jr. have been able to complete the task over the years. Abold has won Oswego and Star, he just needed Sandusky. When asked about the fact that he just missed it, Jeff said, “I didn’t think of it until I got home! Mikey and I have become good friends, each coming up through the ranks. We respect each other.”

What Jeff enjoys most about racing at Star in a couple weeks…“This is a strategy race and I enjoy running those kind of races.”