Verona, NY – The Turning Stone Shenandoah Clubhouse was the site of the annual International SuperModified Association (ISMA)’s banquet. The celebration also ends the 40th anniversary of the club’s inaugural point season. Founded in 1974 by Jim Shampine, Nolan Swift and Tom Heveron, points were not kept for the first two seasons as the fledgling organization found area tracks to run their winged supers. The awards ceremony was begun after a delicious buffet dinner by master of ceremonies Danny Kapuscinski, Public Relations Specialist at Oswego Speedway.

After recognizing the numerous loyal ISMA sponsors led by Corr/Pak, Hoosier Tire and Shea Concrete Products, an appreciative mention was given to the long list of volunteers who make it all happen throughout the year. The 2015 Officers and Board of Directors were also acknowledged. Howie Lane continues as President, Doc Hathaway as VP, Marsha Gadzera was named Secretary and Kathy Harrington, Treasurer and Membership. 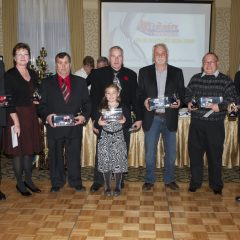 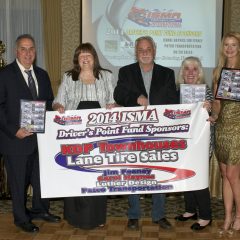 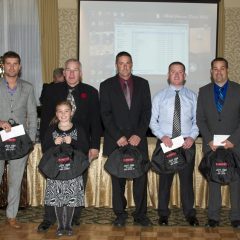 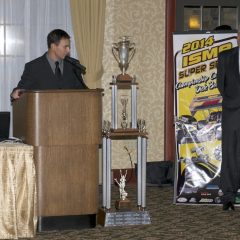 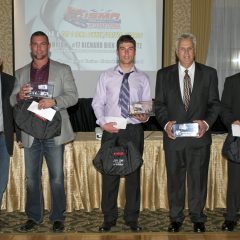 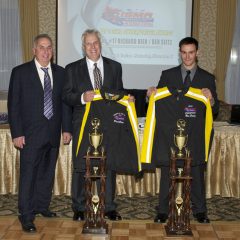 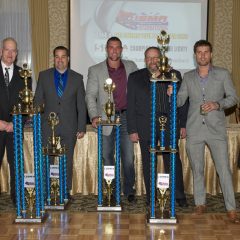 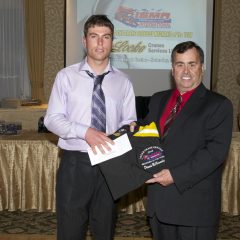 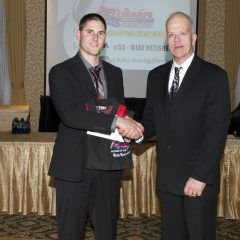 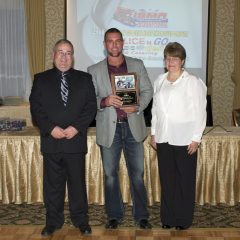 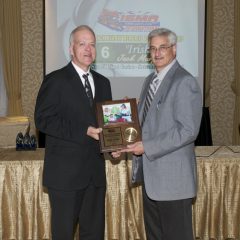 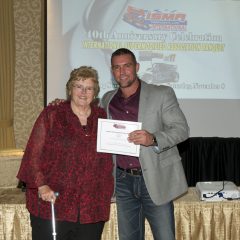 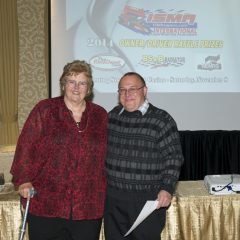 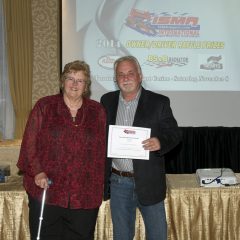 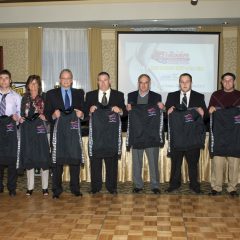 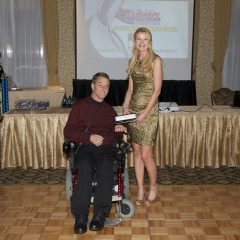 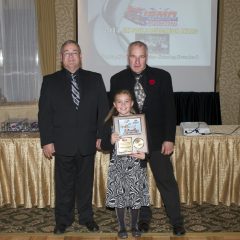 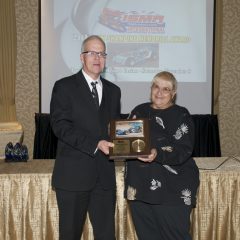 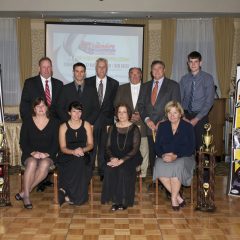 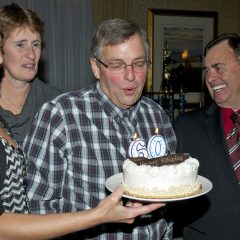 The 2014 ISMA championship team of Richard Bien and Ben Seitz paused to thank the many people who made their first ISMA championship possible. Seitz recognized his crew, his car owner, his wife and family, his parents and sponsors, the Lorusso family, Sam Lorusso and Sons, Judy and Sam Lorusso and Cape Cod Aggregates all of whom have supported Ben through much of his successful midget career also. Bien added his thanks to the Seitz family for their support, the crew, his son Mike and to ISMA for their outstanding organization. A huge trophy, jacket and check went to each of the new champions. Radical Race Gear also provided a pair of racing gloves to the driver.

The individual awards began with the new Radical Race Gear Lap Leader award going to Lou Cicconi who drove the Clyde Booth 61 this season to three feature wins. Cicconi led the most feature laps during the year.

The Randy Witkum Memorial Award sponsored by Shea Concrete Products, went to Mike Netishen, driver of the 55 super. He too received a Race Threads jacket and a check for $500.

The Slice n Go Deli Most Improved Driver Award went to Rob Summers, driver of the Lichty 74. Rob received a plaque and a check from owners Dennis and Sue Heppell.

The first annual Jack Murphy Recognition Award to Mark Burns who worked alongside of Murphy for several years as a tech inspector.

Several donated awards were determined by the luck of the draw from the names of drivers or owners in attendance. Rob Summers picked up the Seymour Enterprises helmet, the BS&B Radiator went to Tony Bowes and Brad Lichty won the New England Motor Racing Supply (NEMRS) nose wing kit.

The Race Threads Crew of the Year award, which includes embroidered crew shirts for all team members went to the McKennedy 79 team.

The Jim Soule Dedication Award went to Canadian driver Mark Sammut and last but certainly not least; the Jim Shampine Memorial Award was presented for the third time to Ed Shea for his dedication and determination to make the ISMA association to grow.

A big thank you round of applause was given to the banquet committee which consisted of Sue and Dennis Heppell, Kathy Harrington, Marsha Gadzera, Terri Bowes, Debbie and Leanne Lane, Bobby Rodier, Anne Schaefer, Raven Reed, MC Kapuscinski and to the Turning Stone staff who made the evening an enjoyable one.

Jammin’ Beats turned up the music and the entertainment followed.

During afternoon meetings, some rule changes were discussed and a potential 2015 schedule was discussed. On the tentative docket of events were Canada’s Delaware Speedway (May 15th) as the opener and then it was on to Oswego Speedway for the 65th Anniversary Super Spectacle consisting of both the ISMA wings and the Oswego non-wing supers in competition on the 23rd of May (see oswegospeedway.com for more info), In June it’s back to Oswego on June 13 then a return to the Lorain Speedway for a two-day affair, date to be confirmed. The last ISMA racing at Lorain Speedway came on Sept. 15, 1984 where Doug Saunter was the winner of the 100-lapper there. Details on this weekend are still in the works. Also in the works is a return to Jennerstown Speedway in Pennsylvania with dates in June or August in discussions. The last ISMA race at that fine facility occurred in 2007 when perennial winner of that event, Chris Perley took the checkers. The slated 2008 race there was cancelled. Sandusky Speedway’s Hy-Miler weekend closes out July on the 24th and 25th.

August is a busy month for ISMA with annual visits to Lee USA and Waterford Speedbowl on the 7th and 8th. Another potential thrilling weekend being discussed at this writing is a Delaware Speedway Harv Lennox Memorial on the 21st coupled by the return to a resurrected Cayuga Speedway race on Sunday the 23rd. Then it’s on to final traditional three, the Oswego Classic weekend Supernationals September 4-6, the Star Classic, Sept. 12 and the Thompson World Series in October (16-17). The official schedule and dates will be released when everything is finalized. It will be posted on the official ISMA website, ISMAsupers.com in the future.