Oswego, NY – The International SuperModified Association capped off another successful race season Saturday night honoring the top point getters and other award winners with the Turning Stone Casino in Verona once again serving as the beautiful backdrop.

The 2015 championship team of Jim Bodnar and Dave Shullick Jr. were presented their trophy and checks, along with jackets denoting their achievement. Shullick was also awarded the Radical Race Gear Lap Leader prize for leading the most feature laps over the season. Jim Bodnar was recognized as the Locke Crane Services Mechanic of the Year with a $1000 check and a jacket going to the car owner and builder. 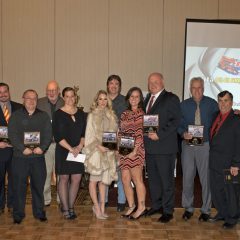 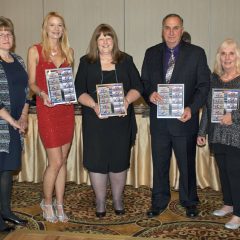 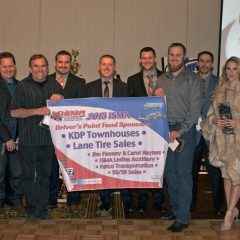 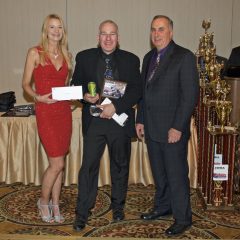 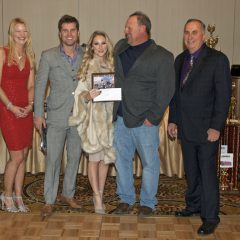 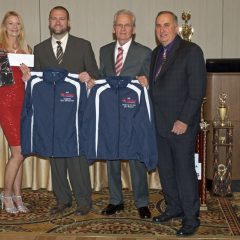 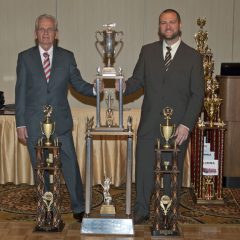 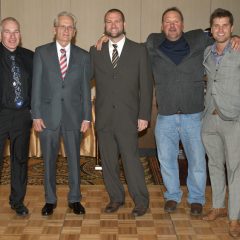 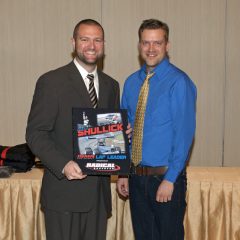 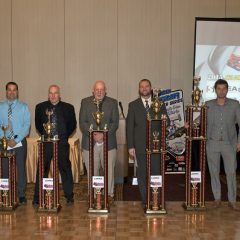 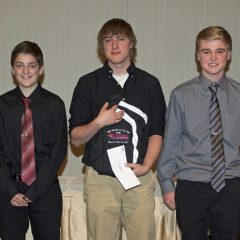 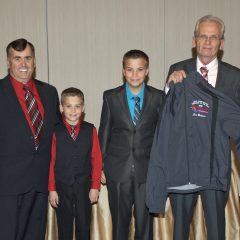 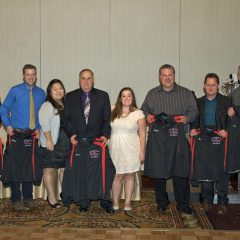 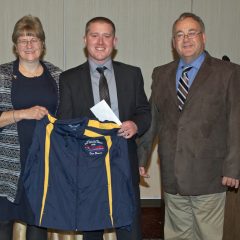 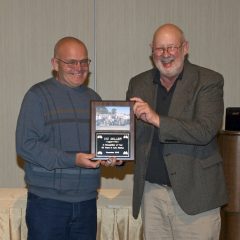 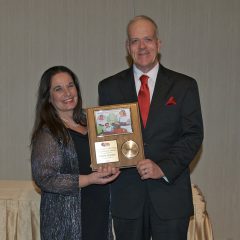 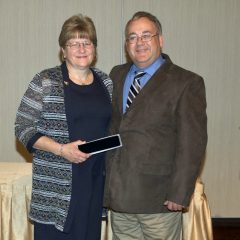 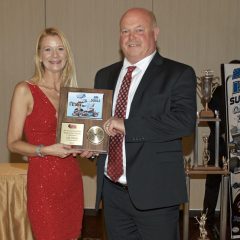 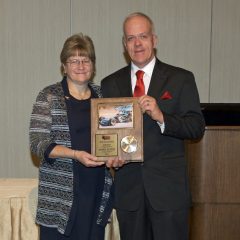 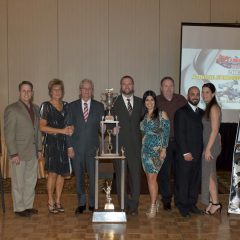 The Randy Witkum Memorial Rookie of the Year award, sponsored by Shea Concrete, went to Ohio driver Kevin Jaycox Jr. who finished 20th in the standings. He received a jacket and $500 check for the honor.

The ISMA membership votes on the following prestigious awards:

The ISMA Crew of the Year Award was announced as the Lane Racing 97 team, driver Tim Jedrzejek, with each member given a jacket.

The Lois Matczak Memorial Woman of the Year award was given to Sue Heppell.

The Slice n Go Deli Most Improved Driver jacket and check were presented to Dan Bowes, driver of the Bowes 25, by sponsors Sue and Dennis Heppell.

Three drivers, by luck of the draw, were presented with contingency awards. Trent Stephens took home the Seymour Enterprises helmet. Jeff Locke received a certificate for a BS &B radiator and a nose wing kit, donated by New England Motor Racing Supply, went to Mike McVetta.

Before Master of Ceremonies Danny Kapuscinski began the evening’s program, many door prizes were given out with the able assistance of Camryn and Jordyn Sammut. A round of applause went out for the banquet committee which included Terri Bowes, Marsha Gadzera, Kathy Harrington, Dennis and Sue Heppell, Debbie, Howie and Leanne Lane, Bobby Rodier and Anne Schaefer, for their efforts to make the night a success.
Jammin Beats DJ provided the entertainment after the awards ceremonies.

A general membership meeting was held during the afternoon prior to the banquet which included a discussion on some rule changes for 2016, a financial report and introduction of new secretary Jessica Stephens. A tentative schedule was presented with the 2016 season opening at Oswego Speedway on May 28. June finds ISMA at Delaware Speedway on the 6th and at Lorain Speedway on the 24th and 25th. It’s back to Oswego Speedway for the annual King of Wings on July 9, with a return to Jennerstown Speedway on the 16th and ending the month with the annual Sandusky Hy-Miler weekend on the 29th and 30th. August has the traditional Lee USA event on the 5th and then Waterford Speedbowl on the 6th. The Harv Lennox Memorial at Delaware Speedway is slated for August 19th. September lists Oswego Speedway’s annual SuperNationals on the 3rd, the annual Star Speedway Classic on the 10th. A return to Toledo Speedway has a tentative date of September 30th, but this was announced as still being unconfirmed with talks with that Ohio track ongoing. As usual, the annual Thompson Speedway Motorsports Park closes out the season on October 14-16.