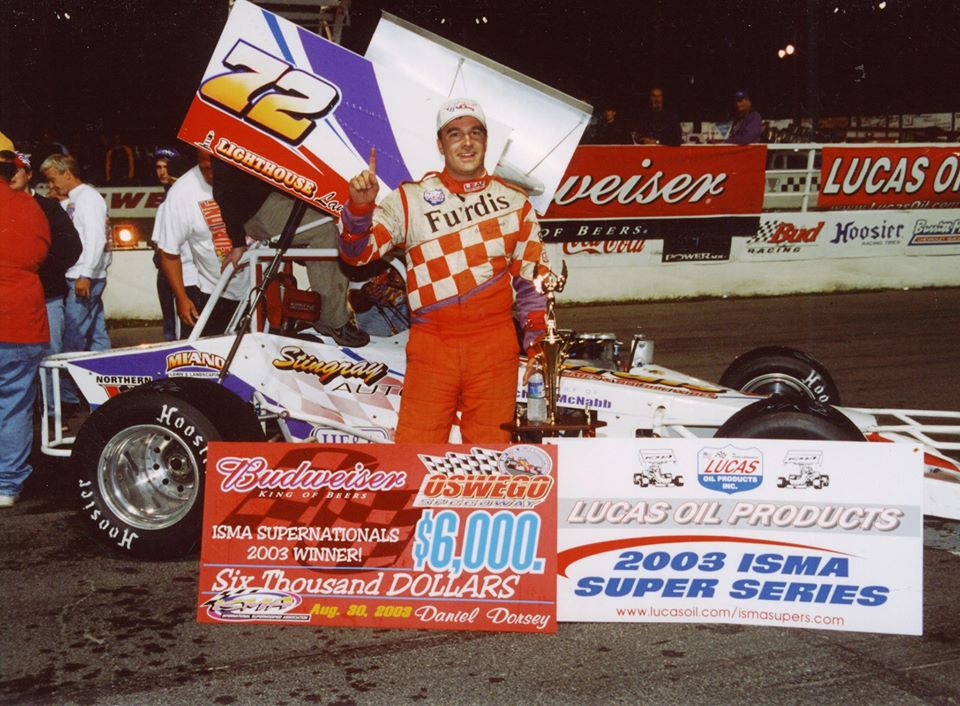 OSWEGO, NY – In one of the most surprising offseason announcements in recent memory, Supermodified star Greg Furlong has announced his return to the driver’s seat in 2020 as pilot of a brand new Hawk Chassis owned by Jeff West. The car will see Furlong at the wheel for several races with the International Supermodified Association in addition to select Midwest Supermodified Series events.

“I can’t thank Jeff West enough for the opportunity to get me back involved in Supermodified racing,” said the six-time International Classic champion. “I ran down to see him for the first time in several years this past Classic Weekend and that is how it all started.”

West, who boasts dozens of wins as a successful Supermodified driver, owner, and car builder, is responsible for introducing Furlong to the big block class more than twenty years ago. Greg’s first shot in a Super came in West’s backup No. 90 on Classic Weekend 1996.

“Jeff gave me my start in this gig,” Furlong explained. “I was racing my Limited for several years and I didn’t know him, but told him I’d love to drive a Super someday and he said, let’s do something. I drove his car in the 1996 Classic, and after that, I just had to buy the thing.”

Furlong Racing purchased the car in 1998, and suddenly this new driver from Oswego began to take the Supermodified world by storm. Furlong would go on to win a total of nineteen features in the West Chassis from 1998 to 2004 including three International Classics in ‘99, ‘00, and ‘04.

Furlong’s most successful season came in 2005 when he debuted a brand new Hawk Chassis, bringing home the track title along with his fourth Classic win. Perhaps the most daunting stat of Greg’s career came that same season as well, as he wheeled the newly donned purple 72 into victory lane six straight times from May 29 to June 25.

Between the West car and the Hawk car, Furlong won an unheard of four Classics in a row from 2004 to 2007 along with a grand total of 36 main events accumulated from 1998 to 2008. His streak of four is the most consecutive Classics won by any driver in Oswego’s history.

“I have been so fortunate over the years,” offered Furlong. “Jeff gave me great equipment and I won a lot of features in a West car and then won a lot in a Hawk Chassis, so now it’s the perfect scenario for me. I have a Hawk and a West. Working with those two guys is everything to me.”

Past achievements aside, ten years away from racing is a long time for anyone and a lot has changed for Furlong since the year 2010. Now 47 years old, Greg admits his itch to race remains, but it is now time with his family that is the main priority.

“I want to race, but only when and where I want,” Furlong explained. “I have a beautiful wife and three amazing girls and they come first. However, It was easy to walk away when my kids were babies, but now they can see Dad race and that’s exciting. We’ll hit several shows with ISMA and MSS. If we’re able to make one then we will, but if we can’t, then we won’t. At this stage, it’s all about having fun.”

In the decade spent outside of the cockpit, Furlong has kept very busy. He is the co-owner of Furlong Properties, Premier Living Suites, Furdis Modular Homes, and Six Scoops Ice Cream, all based in Oswego. A very successful business owner, work commitments have been one of several reasons Greg has elected to turn potential rides down in the last ten years. So, why now?

“I knew when Jeff asked what I was doing, he was serious,” Furlong explained. “I decided that I’d call him after Classic to inquire about it and it turned out what we wanted was exactly the same. Obviously, it’s great equipment. It’s all brand new and best of everything. I tried to find a good reason not to do it and couldn’t, so I had to come back. It’s the perfect opportunity. For awhile, I truly thought I’d never race again, but I guess I’m not ready to be done just yet.”

With a new car well on the way, there is no track on the ISMA or MSS circuits that fans should completely right off a Furlong appearance at. He says he could be at any, but likely not all of the shows. Jeff and Greg do have a few events circled in particular; Sandusky, Star, Lee, Seekonk, Indy, and Thompson. Focusing on only winged Super shows will give Furlong the opportunity to attempt two events he has not competed in since his lone full-time ISMA stint in 03; the Hy-Miler Nationals at Sandusky and Star Classic in New Hampshire.

“A couple things in my career I haven’t done that still stick out are I haven’t won Hy-Miler and I haven’t won the Star Classic,” Furlong said. “We’d like to attempt those. I had a good run at Star one year and finished third behind (Russ) Wood and (Mike) Ordway. I’d like that one badly. You have to set goals; and I want to go out and win races, but first and foremost, I just want to come back, race, and be as competitive as I possibly can be. If we do that, I will be very happy.”