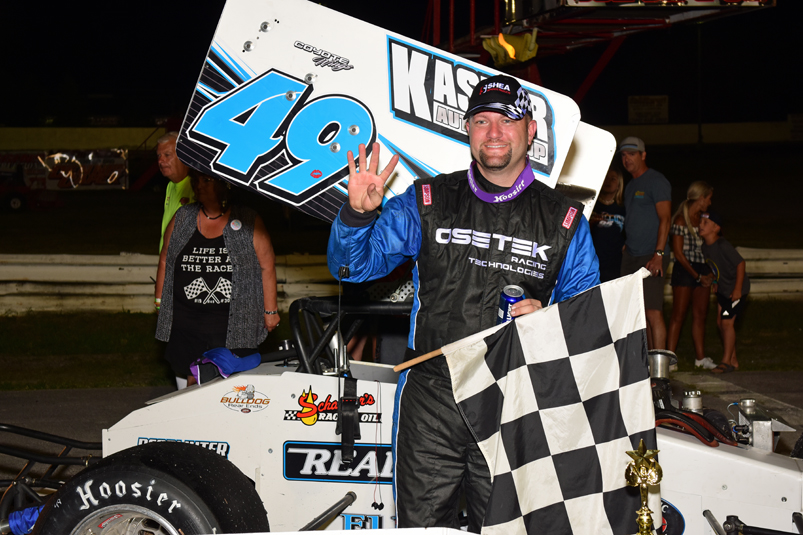 Sandusky, Ohio – The Saturday Hy-Miler race was a complete turnaround from Friday night’s Fast Forty fiasco that saw almost half the field damaged in the race. A herculean effort was put forth through the night and into the morning by all the teams involved and only two cars were unable to make the Hy-Miler field on Saturday. This fact alone made the race even more important to Shullick Jr., the Acme Race team and all the others who prevailed.

The Hy-Miler had four leaders and some of the most exciting racing a fan could ask for. But in the end the 49 sat in victory lane, having led 83 of the 100 laps and inching Shullick Jr. closer to his legendary father, Dave Shullick Sr.’s record of 5 Hy-Miler victories. Shullick Jr. phoned his famous dad to give him the news and Shullick Sr. kiddingly said it might be a good time to come out of retirement!

The 42nd annual Hy-Miler 100 saw perfect weather, great racing which also brought elation to both Dave Shullick Jr. and the Stout Acme Race team. Shullick, in only his second time in the new Stout 49, drove to his fourth Hy-Miler 100 pretty much not threaten out front. More importantly it gave the Stout team their first victory in this fabled Ohio race. In the realm of things, a fourth Hy-Miler would have been enough of an accomplishment for the North Ridgeville, Ohio driver, but the win meant more.

After a tumultuous victory lane ceremony, back at his pit Dave talked about the meaning of this win.

“This is really incredible. This is one of the ones we did a lot of work for. I thought we worked awful hard all week to make the car go. I have notes on these Stout cars and we went back years and years and years of those notes and none of them applied to what we did tonight. We just had to do what we had to do to make the car go. The best the car was, was in the first 50. Then the car freed up a little bit and that’s when Edwards got me. Then the red came out and we were able to put fuel back in the car in the back and it tightened it right up. I was able to pull away in those last 25 laps… that was go time. That’s what I live for is the last 25 especially in this race. This has been in my family for a long time.

“So I knew with 25 to go, it was time to go. And we went. This is a brand new car, and the second race on it. Last night we learned as much as we could learn to come out tonight, and we just kept learning. We changed things and just kept working and working. As I said we shined in the moment we needed to shine. And, I’m really proud of the all the guys. This one is really for Rich Stout, Steve Stout and all the crew for all the hard work they put into it over the season. This is their first Hy-Miler win – they’ve been trying and trying it for many, many years; 20-plus maybe. It means as much to me to get if for them as number four does. But doing it with these guys is very special.”

The driver who finished a second at this Hy-Miler, Mike Lichty, finished once again one spot away from an elusive first victory. Sitting in his 84 Mike reiterated his words from Hy-Miler’s past:

“Second again. I am just disappointed in myself to be honest with you. We had a really good car and initially at the start my plan was to kind of ride it out a little bit. I didn’t want to lead, or to set the pace. It was a long race and then Timmy and Moe got by me and I just kind of picked my way back up to second there for the longest time. Whenever I wanted, in the early part of the race, I could just reel DJ in and I was just kind of cruising. But looking back on it now I should have taken the opportunity when I could to have passed him; to pass him and kind of control the race with about 40 to go. But the car got a little free at one point and it shoved the nose at another point. I couldn’t really run a line where I needed to. So, second it is. We’ll take it and move on. I just have to thank Craig Reed, everybody at Reed Salvage, the whole Reed family, my father, Patco Transportation, all the sponsors, Corr/Pak, Eddie Shea, everybody that supports ISMA and everybody on the crew. And, a big thank you to Dennis and everybody in the motor shop.” 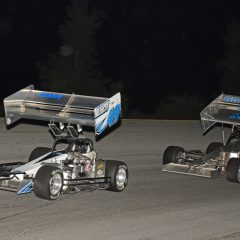 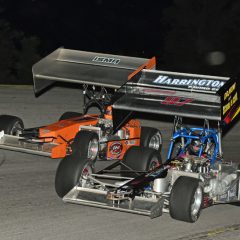 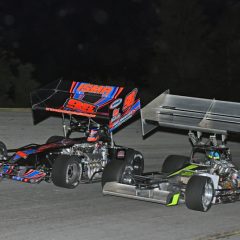 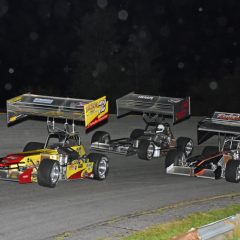 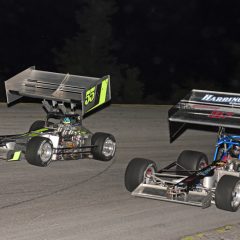 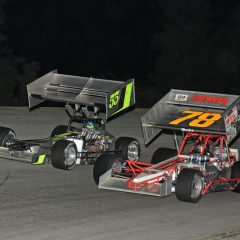 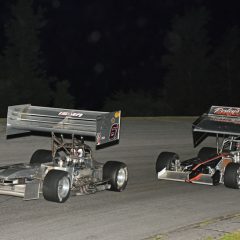 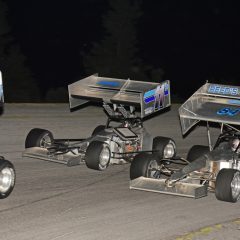 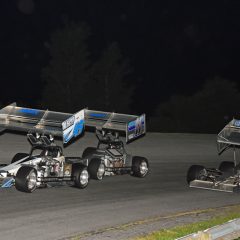 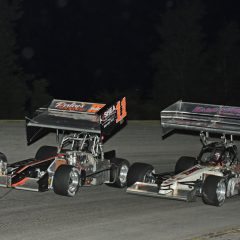 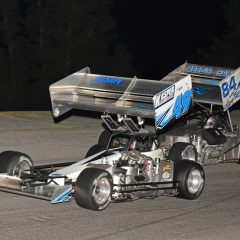 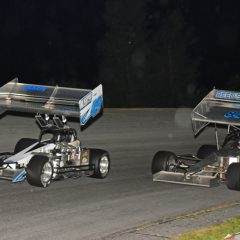 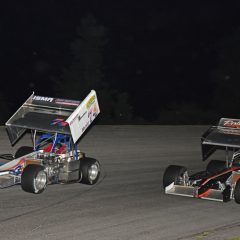 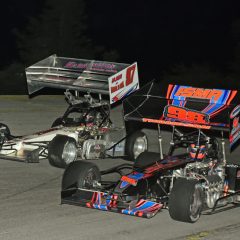 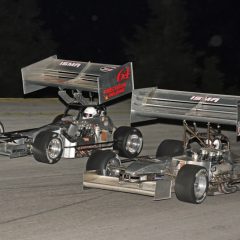 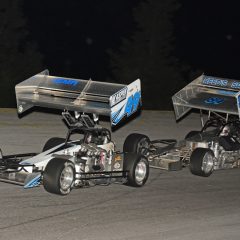 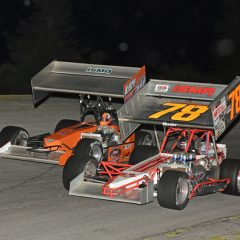 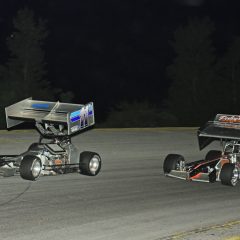 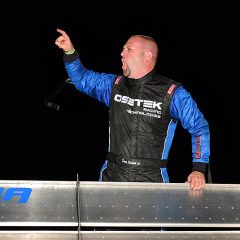 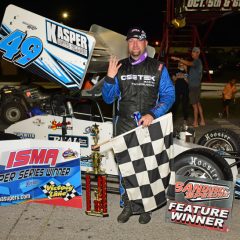 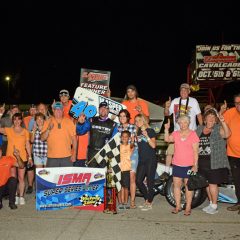 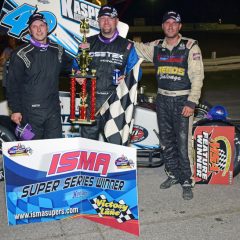 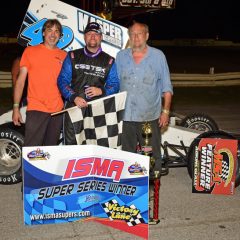 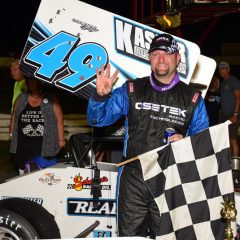 Kyle Edwards who has been collecting fast time awards of late, found himself in third after an unfortunate set of circumstances that sent the 11 car to the tail of the finish after the car was found to be too light in post-race tech, moving all finishers up one spot. Kyle, who had taken the lead from Shullick on lap 66, only to find himself going backwards several laps later due to a fuel problem, indicated that there was some driver error that caused him to loose the lead.

“I guess it was the driver’s fault. I thought I pumped all the fuel out and I didn’t apparently so it bobbled there. I threw the switch and we got fuel about a lap later but we lost the lead and then the red came out to refuel and that didn’t help. We got tight so it just wasn’t our day. But it was some really good racing and that’s what it’s all about. It just wasn’t our day to win. It was a good race. The car’s in one piece. We are still learning… it’s new to us. We’ve seen a lot of speed and now have to work on the race balance and we’ll be there competing for wins.”

Teammates Moe Lilje and Mike Lichty formed a formidable front row at the start of the 42nd Hy-Miler and it was Lilje grabbing the lead, but charging up from fourth starting spot was Timmy Jedrzejek who swooped past Lilje to lead on lap four.

The first yellow of the race came on lap 7 when the 15 of Michael Muldoon stopped after a simple spin. He re-entered the race after being pushed around.

Resuming his lead Timmy J soon had Shullick breathing down his neck and on lap 13, Shoe II had the point in the sleek new 49. He soon left the nearest contenders in Lilje, Lichty and Jedrzejek behind.

Shullick was comfortably out front when yellow for the 7 of AJ Lesiecki bunched the field back behind the 49. Pitting on this stop was Ben Seitz who reported out for the night after suffering some major damage on Friday, as did Larry Lehnert in the 92. The 7 of Lesiecki was able to return.

At the 25 lap mark Shullick was once again building a good lead with Mike Lichty taking over second from Lilje. Behind were Edwards, Mike McVetta, Jedrzejek, Danny Shirey, and Mike Ordway Jr with plenty of time to plan their attack.

Yellow flew again for a second spin by Muldoon who headed into the pits and remained there while Trent Stephens returned to the fray.

On this restart Shullick gunned it out front as Lichty was now pressured by the speedy Edwards. Lilje, McVetta and his teammate Shirey, formed the next trio, while a slight distance behind them came Mike Ordway Jr. moving carefully forward.

Now Shullick’s lead began to evaporate rather quickly when Lichty soon came up to challenge. The 84 was getting alongside the 49 on several occasions but the cat-mouse game was broken up by a lap 40 yellow for the 7 of Lesiecki. He would pull pitside at this juncture, to stay. Mike McVetta disappointingly brought in the 22 due to overheating, calling it a night. Timmy J and Rich Reid pitted and returned.

With the race nearing halfway, Shullick was able to withstand the assault on his lead but Lichty tried everything he could to wrest the spot away. Edwards was running alone in third with Lilje, as Ordway Jr, and Michael Barnes waiting their turn to challenge.

After lap 50, the race settled in to a steady run by Shullick, then Lichty, Edwards, Lilje, Ordway and Micheal Barnes. Talon Stephens headed for the pits on lap 55 but was able to make it off with no yellow.

The counter moved into the 60’s as Lichty and Edwards were decreasing the distance between their cars and Shullick. On lap 66, Edwards cruised by Lichty and then Shullick, to suddenly take the lead and put both Tyler Thompson and Timmy J, who was experiencing tire problems, down a lap for some cushion.

Edwards’ aforementioned fuel malfunction came as suddenly on lap 71 when he slowed dramatically with Shullick right there to retake his lead.

Rich Reid brought out the yellow soon thereafter and with the allotted number of caution laps for fuel running out, the race was stopped on lap 75 for fuel.

Fourteen of the original starters now remained for the 25 lap homestretch duel that Shullick indicated was “his time”. He pulled away from Lichty who had Edwards locked to his rear end. Edwards, Lilje, Barnes, Ordway were the nearest challengers.

A quick yellow on lap 78 for Tyler Thompson would be the last slow down.

At lap 80 Lichty was once again in shooting range of Shullick while Edwards, Barnes, Lilje and Ordway watched for their time to move.

With ten to go Shullick looked to be cruising to win number four as he came into some traffic getting by Trent Stephens and Jedrzejek for some insurance markers. That left Lichty, Barnes, Edwards, Lilje and now Friday night winner, Jim Paller in line to watch the checkers fly for Shullick who arrived in victory lane to a large, cheering throng of Shullick and Acme Racing fans.

Lilje and Paller rounded out the top five after the post-race line up change.

Lilje commented afterwards. “ Oh, what a night. It started off and I thought we might have something decent. But the longer the race wore on, it became more and more obvious that we weren’t really going to be good enough to truly contend for the win. We kind of struggled to keep pace with the leaders. I was having to pace the car more than I wanted to. Things just didn’t aline the way we wanted them to. Still it was a good night. We got a top five. I guess that’s always solid in this race. Congrats to DJ on his fourth and to Acme Racing for finally getting their first Hy-Miler win. And I hope my teammate Mike ends up pulling one off here soon. He’s been second two or three times. I know his pain. As the saying goes, “there’s always next year.”

Friday night winner Jim Paller talked about his fifth place finish, “We started off the night ninth and we thought we were going to have a good car. We ended up being tight all night and dealt with what we had. We just tried to keep ourselves clean and try and finish it up. The car just kept tight all night through. We never got loose. So we just rode around, picked up some spots and took what we could get.”